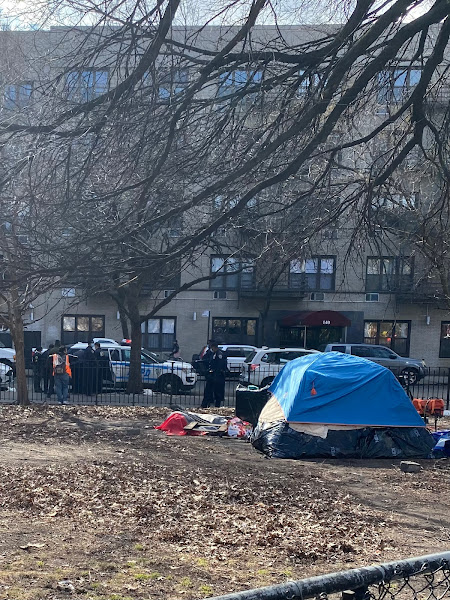 Today around noon, members of the Department of Sanitation, the Parks Enforcement Patrol and the NYPD oversaw the removal of a lone tent that had been up for several weeks in Tompkins Square Park near the chess tables at Seventh Street and Avenue A.
Workers were seen discarding the contents in and around the tent. Witnesses said that one of the occupants was arrested after the NYPD said that he could leave, and he refused, per witnesses. The tent was also removed.
This action comes two days after crews for "Law & Order" erected a fake tent city nearby that served as a backdrop to a scene with Anthony Anderson's Det. Bernard and newcomer Jeffrey Donovan as Det. Frank Cosgrove.
Thanks to Steven for the photo.
Previously on EV Grieve:
Documenting the city's 'clean-up' along Tompkins Square Park on 7th Street
Posted by Grieve at 8:00 PM

The Trader Joe's steak defenders are unsurprisingly silent about one of their neighbors having their home destroyed and being dragged away (possibly to their death, considering the conditions at Rikers) for the crime of needing shelter. Meanwhile, supposed chaos reigns just 6 blocks north, ignored by this armed and well-compensated city employee.

Re: Ian " silent about one of their neighbors having their home destroyed and being dragged away"
Some of us have lived here in the EV a long time and remember the homeless shantytown in Tompkin Square Park. Never again!
"For Donna Ryan, the string snapped three months ago as she watched her child in the playground of Tompkins Square Park. On the other side of a fence surrounding the play area, a young derelict walked up to where she was sitting and defecated through the iron bars."
https://www.latimes.com/archives/la-xpm-1991-06-13-vw-837-story.html

You mention the fictional Det. Frank Cosgrove...funny, because those of us watching Ozark know Frank Cosgrove as head of the Kansas City mob...