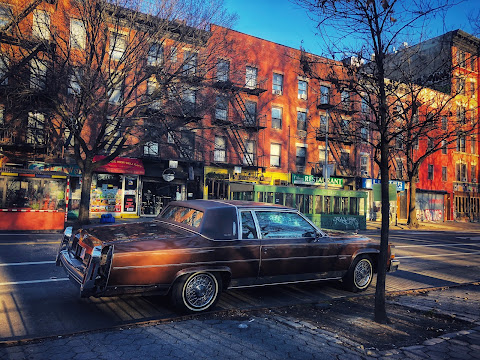 Photo from Avenue A on Saturday morning
• The Ukrainian community in the East Village reacts to the ongoing Russian-Ukraine crisis (NBC 4 ... Our Town ... The Village Sun)
• The family of 35-year-old Christina Yuna Lee, who was stabbed to death in her Chrystie Street apartment on Feb. 13, have launched a GoFundMe campaign to raise money to go to causes that were important to her (GoFundMe)
• The debate over combining P.S. 19 and East Village Community School (Daily News)
• Safety concerns at Sara D. Roosevelt Park (NY1)
• Looking at the "suspiciously sourced goods" on sale along the sidewalk markets on First Avenue at 14th Street (The Post)
• Mayor Adams' first preliminary budget would lower Department of Homeless Services spending from around $2.8 billion to $2.15 billion in the 2023 fiscal year, due mainly to the loss of about $500 million in COVID-related federal funding allocated to the agency (City & State) ... and the mayor's composting cuts (Streetsblog)
• The future of outdoor dining in NYC (Gothamist)
• Man arrested for allegedly stabbing a breakdancer on the L train at 14th Street and Third Avenue (ABC 7)
• A feature on Shenarri Freeman, the chef at Cadence on Seventh Street (Vogue)
• Nuyorican Poets Café names an interim exective director (The Lo-Down)
• 9-story building coming to this space on Chrystie between Stanton and Rivington (NYY)
• A chopped cheese hunt on the LES (Eater)
• Amelia and Christo are ready for spring in Tompkins Square Park (Laura Goggin Photography)
• Musical Mondays at the Village East (Official site)
Posted by Grieve at 11:30 AM

Corrected the link to the fifth item at the Post ...

I think we all know the "source" of those goods on E. 14th. The shoplifting isn't great, but it bothers me less than what looks like raiding the community fridge a couple blocks south. To be clear: it's okay to take what you need for the day from the fridge and decide to sell it (or whatever!) instead of eating it, but very uncool to clear it out so others in need can't get any.