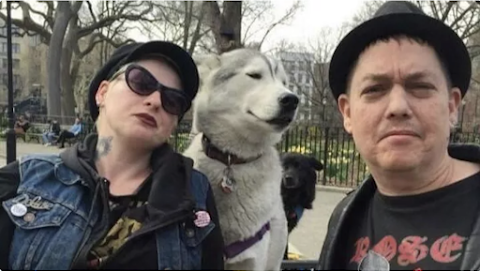 Al Landess, a longtime local resident and veteran of the NYC hardcore scene, died on Feb. 15 of cancer. He was 54.
Landess — aka Al Hammerbrain — was the frontman, guitarist and songwriter of Hammerbrain (later Damn Kids). He also worked for years at Benny's Burrito's on Avenue A and Sixth Street until it closed. He later managed Kelly's Sports Bar on Avenue A.
You also likely saw him playing at or attending one of the free shows in Tompkins Square Park through the years ... or walking with his partner Joanie and their huskie Augustus.
Friends and family started a fundraiser. Here's more via GoFundMe:

When Al passed away this week after months of battling cancer, his beloved longtime partner, Joanie Koveleskie was by his side, and now she needs our help. All donations will go directly to Joanie to cover funeral expenses, medical and household bills, and to provide her some relief and room to grieve during this devastating time.
The East Village will never be the same without Al's presence. He will be missed as much as he was loved.

Friends are planning a memorial in his honor this spring at Otto's Shrunken Head. More details on that when they are available.

Image via GoFundMe
Posted by Grieve at 1:00 PM

Al was our waiter at Bennies Burritos for years. Losing Al is like losing a piece of the old East Village. May he Rest In Peace.

Rip, I don't know him but the puppers loving gaze tells me all II need to know...

He was a wonderful person and a true East Village character. Very sorry about this. Benny's had a wonderful scene for years.

years ago i remember al telling me when it was his time to go he wanted to take a header off the empire state building with a big ribbon tied to his feet that said 'Eat At Joes'...RIP man you will be missed.

We are putting together a memorial concert in our beloved Tompkins Square Park for our beloved brother AL LANDESS on May 14, just a day after what would have been his 55th birthday.

Meanwhile, AL's 30+ year life partner Joannie, who has been his rock, needs financial assistance. Please donate to the GoFundMe campaign, or to Joannie directly.

Yes remember him from benny’s. Rest in peace.

Al was an amazing man, who never changed he simply was a beautiful soul. I've known him since the early 90's. When my husband passed away in 1990, it was Al who was one of the people that helped me deal with that grief. I was a foreigner in fairly new from Canada and didn’t know many people. I felt lost after my husband passed away since I hardly knew anyone. Pretty much all restaurants would not welcome someone with a young baby and allow you to feel comfortable outside of the East Village. Well Al at Bennies Burritos made me realize that I had a home outside of being lonely in my apartment. Placing my son in his chair on the bar I ate had my specially Margarita made by Al, muah, just perfect every time and had the greatest conversation with Al. He watched both my sons grow up from babies to adults. At 10 years old he had them with him behind the bar and allowed them to experiment with whatever concoction they wanted to make and surprisingly, people at the bar wanted to try it and some liked their ‘concoction’ yuck…
My son at 16 asked Al for a job at Bennies and his response was, well… hmmm lets see, I’ve known you since you were a wee babe, so ah ok, when can you start? :D <3 That was the entire interview, my son worked there until Bennies closed down.
This was the kind of man Al was, a friend to kids, parents and all alike, making everyone feel special. He never judged anyone he lived and let live.
If the world were filled with more people like Al we would be in a much better place right now. He will be greatly missed. RIP love. <3 <3 <3

I first knew Al from the Charleston punk scene circa 1983, and then again when I lived in NYC for many years & would visit Benny's Burritos to eat & chat. Although he was more of an acquaintance than a close friend, nevertheless he was always very humble, unassuming & fun to be around. I am very saddened to hear of his passing & know he will be missed. My thoughts are with his friends & loved ones.

Hey, hi I’m so sorry to hear of Al’s passing. I was the English girl who hung out/squatted with the punks in and around the park for some months that included both TSP riots. An intense time of my life that shaped me forever. I remember Al and Dandy, , Ralphy, Huck, Darby, Johnny V, Wiz, Opie and lots more faces but the names are hazy. Hammerbrain were one of the awesome bands. I was 17, maybe 18. We were all kids. I listened to my cassette tape of Hammerbrain that Al gave me for years after I got back to London. I’ve been back to NYC a few times and wish I’d known Al was working locally- I woulda gone said hi. He was so cool. So sorry again that Joanne, the community and his loved ones have lost him.