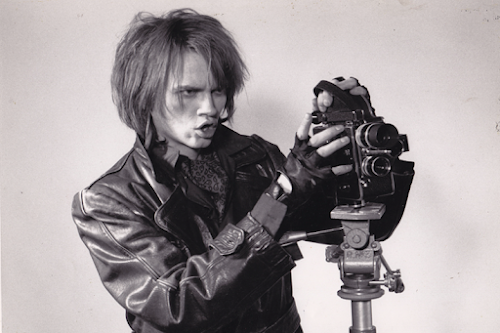 Nick Zedd, a longtime East Village resident who spearheaded the Cinema of Transgression film movement, died yesterday in Mexico City where he resided since 2011, according to his Instagram account.
The artist and filmmaker, born James Harding, was 63.
According to a recent GoFundMe campaign, he had been diagnosed with cirrhosis of the liver, hepatitis C and cancer.
Zedd spent his career on the fringe, directing no-budget films including "They Eat Scum" (1979), "The Bogus Man (1980)" and "Geek Maggot Bingo” (1983), and editing The Underground Film Bulletin from 1984 to 1990. In 2004, Zedd started making a TV series with his then-girlfriend, Reverend Jen, called "The Adventures of Electra Elf."
Per a 2015 feature in Filmmaker Magazine:

Back in 1985, Zedd coined the term the “Cinema of Transgression” to describe the campy movies full of shocking sex and violence that he and other artists like Lydia Lunch, Richard Kern, and Kembra Pfahler were making on the Lower East Side. They were scrappy movies shot on 16mm often with pornographic punchlines.

Among the social media tributes...

Extremely sad to hear of Nick Zedd's passing. The real deal. His work (along with Kern, Lunch, Wojnarowicz, Dick, etc) is a necessary station for anyone with even half an interest in what lies beyond the gated enclaves of boundaried taste. A mad genius of the cinema.

RIP Nick Zedd, one of the realest to ever do it. Watched all his films (and public access work 🙃) in a 24hr period a few months back and permanently broke my brain in the process. Max respect to a true underground king! pic.twitter.com/QSmGGF3pi9

Zedd is survived by his partner of 15 years, Monica Casanova, his son Zerak and step-daughter Amanita Funaro.
You can read an EVG interview with Zedd from 2013 before a retrospective at the New Museum right here.
Posted by Grieve at 5:30 AM

Crushing news. My heart bleeds for his family.

Despite his image, he was actually a nice guy when you talked to him. He was a star in the East Village, an original, creative force. He will be missed but his films live on. RIP.

RIP to a great artist who pushed boundaries

the Cadillac with the Tiger in it Guy said...

Nick was the real deal. He never flinched or toned it down. And his film work was not a one dimensional shock and disgust fest. There was clever humor and real beauty throughout his films. My partner and I were fortunate to get to know Nick personally when he graciously made a cameo appearance in one of our music videos and we subsequently worked on a couple of his projects. He could be an asshole to some (and most, but not all, of whom probably deserved that treatment)but he and his wife and stepdaughter were always super sweet and very kind to me and my partner. Although he left the East Village for good long ago, I'm hard pressed to think of anyone who embodied it more.

I enjoyed watching his films when they were screened at MOMA. Impressive achievement for an underground film maker. Hope someone puts together a Zedd film fest this year as a tribute.