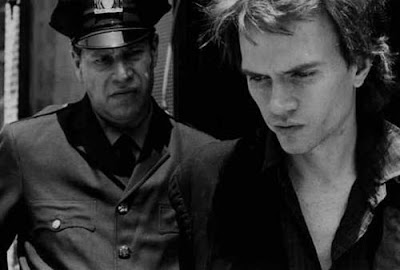 Nick Zedd is in town from Mexico City for a short visit... he is part of a program tonight at the New Museum titled "Moving Image Artists’ Distribution Then & Now." (Find more details on this here.)

And tomorrow evening, The New Museum is showing a retrospective of his work. Per the program:

Nick Zedd’s commitment to DIY artists’ film distribution helped sustain the MWF Video Club project. He will present and speak about his film work with Michael Carter of MWF. The program will include: The Bogus Man (11 min); Thrust In Me (8 min); Police State (18 min); War Is Menstrual Envy (excerpt; 9 min); Why Do You Exist (11 min); Ecstasy In Entropy (15 min); and Tom Thumb (3 min).

Nick Zedd coined and spearheaded the Cinema of Transgression film movement, directing forty-four motion pictures since 1979 and editing The Underground Film Bulletin from 1984 to 1990. Nick Zedd currently resides in Mexico City where he paints, writes screenplays, shoots videos, and publishes Hatred of Capitalism magazine. He recently presented films and artworks at the Kunst-Werke Institute for Contemporary Art in Berlin, and received an Acker Award for Lifetime Achievement in the Avant-Garde.

Michael Carter is a poet, writer, performer, and cultural critic, living in New York City. From 1982–92, he was the editor and publisher of the quintessentially East Village literary and arts journal/zine redtape, and from 1988 to 2003 he was codirector of the MWF Video Club.

Ahead of his visit to the New Museum, we asked him a few questions about his feelings on New York these days (he resided in the East Village for years) as well as Mexico City, where he lives with Monica Cassanova and their son Zerak.

You had a retrospective in Brooklyn in January. Now this at the New Museum. How do you feel returning to NYC — even just for a few days?

I like returning to NYC to see how it's changed and meet old friends. I appreciate the energy of NYC and like to compare it to Mexico City which is so different. There's a sense of desperation in NYC that gives it an edge. I like to observe people. I'm appalled by the loud tourists and ugly humanoids everywhere. There are so many ugly people in NYC, it's incredible.

Yesterday I sat on a park bench in Union Square and watched lovers sit and talk to each other. A black teen with a doo-rag and a wife-beater t-shirt covered in tattoos was talking on a cell phone while his fat girlfriend in a striped dress had her legs draped over his. She waited while he talked to someone, then he embraced her like a small child and it really moved me. There was real love; fragile and fleeting. I'd witnessed something profound. He was beautiful. She was beautiful too. Their love made them beautiful. I wish I'd had a camera on me.

There's a treasure trove of culture in the museums and libraries in NYC and I like selling my art to collectors here. I lived most of my life in NYC so it's still a part of me.

Do you see any positives in Bloomberg's NYC?

The people, who exhibit the NYC strength and anger; the individuality of street people...I never tire of their quality of openness... working class people. They give the city a sense of conviction. A flavor. They're what make it interesting.

We did a Q-and-A with Lydia Lunch back in May. Her advice for emerging artists here: "Leave the country as soon as possible!" What is your advice?

The same. That's why I moved to Mexico. The U.S. is a dead zone for artists.

Do surroundings make a difference? Or do you think the creativity has to come from inside regardless of where you are?

It has to come from inside, but going somewhere unfamiliar can enable your creativity to mutate in ways you'd never expect.

It's quieter and more peaceful. It has a magical quality that I'm still discovering. 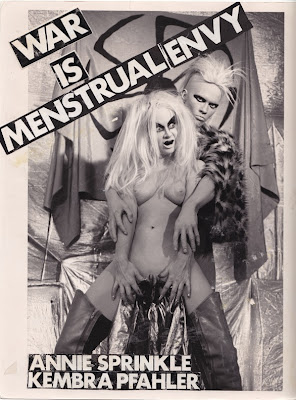 [Top photo via The New Museum]
Posted by Grieve at 6:30 AM

I love Nick Zedd for representing a particular sort of weirdness that seems to have vanished from NYC. That being said, I don't care for his films at all.

I attended the opening of Zedd's Geek Maggot Bingo which included the monster of the film in full costume as greeter in the lobby. Richard Hell and Zacherly where in the film. Weird fun but not a classic.

I met Nick when when he participated in a film festival at the night club where my ex-wife Jessica Jason was the curator. It seems she had ended up with the master tape of one of his films and he became very angry and wanted the tape back. So I was introduced to Nick and became the mediator–Nick received his tape after agreeing to some details of the festival that he had been unwilling to accept. Their argument was patched up and they became friends–and Nick always made a point to greet me after this. I became a fan of his work

Love Nick Zedd and will never forget his retrospective at the film theater at MoMA in 1989. Place was packed with his friends and enemies and a few punks and art fags in the audience were heckling the films (which I thought were wonderful.) He used to show his films every week at Squeezebox as well, and once I had a long conversation with him at John Waters birthday party, circa 1996. (I was driven to the party by Debbie Harry).

I read Nick's memoir ages ago and it was highly entertaining.

Mexico City definitely has an intense creative energy and I'm sure he is much better off there. I'd be interested to see any work he produces there.

Nick Zed and Lydia Lunch were but a fleeting blink in the ever evolving history of this city. They never quite made it, and chose to leave instead of trying to overcome the difficulties, and truly shine here. God bless them, it was a choice... Any of us could have chosen to give up and move to Barcelona or to the DF, but many of us did not, and we stuck it out, and eventually we found a place in this town... Yes, it was hard, and yes circumstances are not now what they were 25 years ago, or 50 years ago, or 100 years ago, or 200 years ago... NYC has always been tough, especially for artists... what has changed is not how tough it is, but rather how much tougher it is to stand out simply because you are loud, and weird, and kooky, if you do not have anything deep beyond that to offer... I agree that being kooky and odd and confrontational will get you noticed in Barcelona or in the DF... but that does not fly here any longer... but if you are good, and you are strong, there is still a place for you in NYC as an artist if you work it.. and are not lazy...

Hey Anonymous Coward,
YOU do not fly here any longer.
You misspelled my name and are too chickenshit to accomplish anything beyond retarded trolling.
You're not even a fleeting blink. You are nothing.
We made it and left.
We didn't give up. YOU gave up and accepted mediocrity in NYC. People who refer to themselves as "we" are PHONY. You don't represent any unseen army, you are a single wanna-be PIECE OF SHIT.
LAZY is ANONYMOUS PUSSIES LIKE YOU making shitty value judgements about those who grew beyond geography and evolved beyond borders to continue making STRONG statements threatening the status quo around the world. EAT SHIT AND DIE, SCUM.

note to self: do not piss off Nick with random forum comments in the AM.

Here's an interesting gecko fact. Giant Madagascar Day Geckos (Phelsuma madagascariensis) have very thin skin, and it's easily torn, so if you want to manipulate them, it's best to chase them into a jar.

One of them works for GEICO. I'm having nightmares about Nick Zedddd selling car insurance,from a jar.

Here's an interesting fact: Dubious non-entities with too much time on their hands tend to imagine their
ersatz pithy comments have significance when in fact they merely represent quaint jealousy of a rather commonplace variety. Continued self delusion leads to nightmares of the ilk you describe.