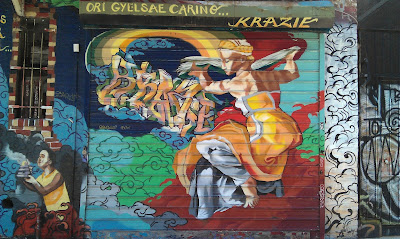 East Village resident Ori Carino's mural on the rolldown gate outside the former Mars Bar was a familiar site in recent years on East First Street.

The bar, and other buildings along here on Second Avenue were demolished in the fall of 2011 to make way for the 12-story Jupiter 21.

One nearby resident, a fan of the bar and of the mural, wondered what was going to happen to the gate when workers tore down the building. At this point, Mars Bar owner Hank Penza had already removed the bar, jukebox, etc.

The resident shared some background:

They were going to destroy a building to build condos ... that had beautiful graffiti covering the exterior walls and security garage rolldown. I contacted the developer to see if anyone had requested the rolldown, as it was assumably detachable from the building and could be preserved. I offered to pay if needed and he said he would contact me when they had taken it down. I'd have to make arrangements to transport it offsite.

They called me the day before Thanksgiving [2011] to tell me that I had to pick it up the day after Thanksgiving at 8 a.m., otherwise it would be turned into scrap. I had not made any arrangements. I needed help moving it, a truck to move it in and a place to store it — at 11 feet by 12 feet, there wasn't a wall large enough wall to display it on in my two-bedroom apartment.

After some frantic searching, I discovered that Moishe's offered free pick-up with three months of storage, solving all my problems in one swift motion. 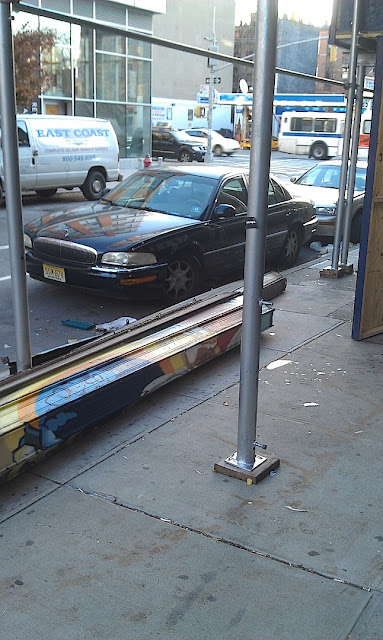 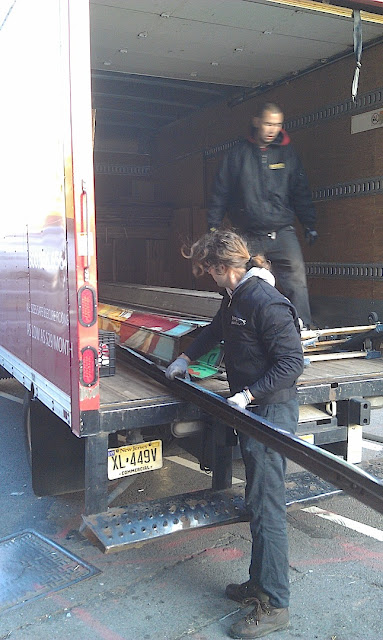 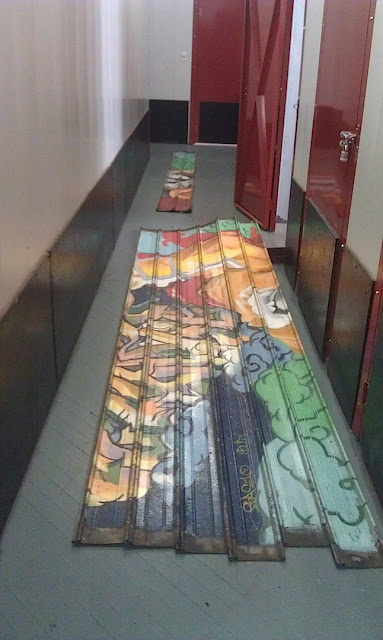 However. The three months turned into 18 months, "so in many ways I did end up paying a fair chunk after all." Now, though, the resident has more than half of the former gate on his apartment wall. The remaining pieces are in his aunt's basement for the time being. 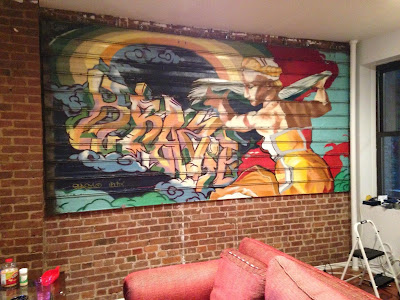 He also was able to salvage another piece of the gate. 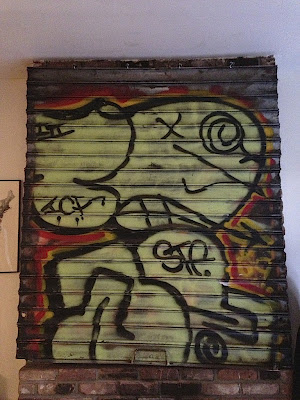 We asked the resident about why he saved it.

"I love street art — graffiti, stickers, tags, etc. Most of the pieces I'd love to have on my own walls are unattainable — permanently affixed, illegally done [and] commissioning a piece from the artist is too expensive," he said. "I had never heard of someone getting one of these in this fashion, but I had nothing to lose. It worked out alright, but my eyes might have been a bit bigger than my stomach because I didn't have a space to hang it — eventually I will."
Posted by Grieve at 6:00 AM

Oh my god, this guy is so lucky! If only I had thought to JUST ASK!!!

Thanks for sharing this story. It's great to hear some of the Mars Bar art was saved.

Ori Carino is the name of the artist. He does awesome work!

Thank you, it's good to know a piece of Mars art lives on.

Perhaps he should think about donating it to the museum of urban space- even if only for short-term.

The graffiti on the gate on the bottom of this post above the fireplace was actually done by me around the time of the "Life On Mars" art show in late 2010. Honored to have it above a collector's fireplace, and I'm curious who the collector is... :)

Here is an interview about the "Life On Mars" show where I get into the importance of Mars Bar a bit: http://bit.ly/vwyH53

You can see a few clear photos of the installation from the Mars Bar show and some other artwork here: www.grimacenyc.com

My favorite part of the signage at Mars Bar was when it used to bill itself as "Daycare for Drunks."

I have the Rubber Machine, which hadn't worked since the mid 90ies; it actually had about $8 in quarters in it, as well as a bunch of boxed rubbers.

Not the heroic score above, but a lot easier to deal with.

that looks awesome in the apartment.

Oh man, this is fantastic!!!

Wow, that is great! Who would've thought to just ask? It looks amazing and is now a valued relic of EV history.

That's fresh. I know the two guys that did the smaller grafitti gate. They did a show together called" Life on Mars".. History.. That's all I can say.. Peace WorldOfDreem..