At the Sagamore Cafeteria, 'always filled with bums snoozing over a cold cup of coffee' 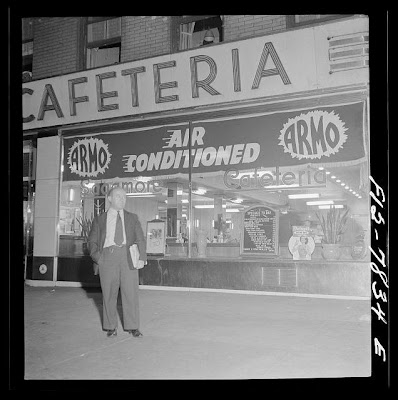 Recently spotted this on the Old New York page on Facebook...

Description:
"Cafeteria near Cooper Union on Bowery. 1942. Photo by Marjory Collins. Photo from the Library of Congress."

As people in the Facebook comments pointed out, this was the Sagamore Cafeteria, St. Mark's Place and Third Avenue. Jack Kerouac called it "the respectable bums' cafeteria."

In his memoir, the poet Ted Berrigan recalled:

"The Sagamore was a big place always filled with bums snoozing over a cold cup of coffee. When you entered the place, you went through a turnstile and took a ticket, whih had various monetary values printed along its edges. Then, as you went down the cafeteria line, each counter man punch your new total cost.

Nobody bothered anybody, so it was a good place to sit if you wanted to talk for hours, which we usually did. Good, that is, if you could ignore so much human misery around you." 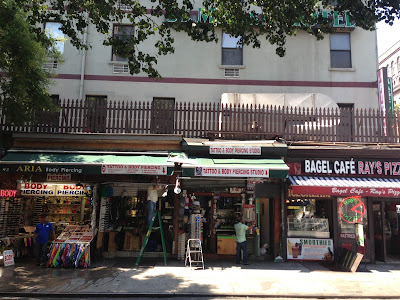 Ugh. Bring back the Sagamore!

Probably didn't take the coffee too long to get cold. They probably kept the Armo working overtime.

You can be sure when the cafeteria opened, people were moaning for the "real" Lower East Side that existed when they moved in.

Is that what people tell themselves now, to excuse themselves from the realization that acceptng extortive rents makes it harder for everyone. If you question whether you are part of the problem, you probably are.

I wouldn't be so sure. When the Beats moved in, most residents were abandoning the neighborhood never to return. And whatever the remaining locals felt about them, the Beats brought extraordinary artistic activity turning the EV into the center of downtown music, poetry, painting and theater.

Face it, some moments and places are more exciting and interesting than others. Whether the EV will ever be anything interesting again remains to be seen, but the kind of development and commerce we're seeing now do not provide evidence of any special conditions of intellectual, political or artistic activity or distinctiveness beyond sociability, comfort and convenience.

@shmnyc, you are the human equivalent of a Quaalude, always playing the part of the downer. You must be a real blast at parties, that is, if you're even invited to them. I hope someday you change your moniker to shmcleveland.

Robert Frank took a photo of the interior. You can see it on the 7th page here:

Thanks EV Grieve for giving The Old New York Page a shout out, I really enjoy your site. Just imagine Kerouac and the guys talking through the night over cold coffee. Thank you for all you do. Great article.