Shaun Martin, who prosecutors say was drunk "and high on PCP" when he drove his car onto a Second Avenue sidewalk last month, pleaded not guilty during his arrangement in Manhattan Supreme Court yesterday, the Post reported.

According to documents filed in court and statements made on the record in court, Martin, of Bayside, Queens, is charged with speeding through the East Village in a white Nissan Altima at approximately 6:50 a.m. on June 19, while impaired by phencyclidine, commonly referred to as PCP, and methamphetamine. The defendant allegedly cut across three lanes of traffic and drove onto the sidewalk, striking multiple objects including a fire hydrant, phone booth, and tree, before crashing into a flower stand attached to a deli on East 4th Street and Second Avenue. Two of the deli’s employees were hit and seriously injured in the crash. Both victims suffered broken bones, and one suffered serious brain trauma. 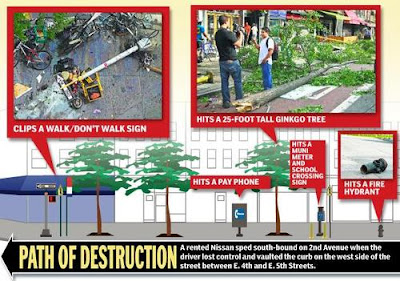 After the wreck, the Post reported that the 32-year-old Martin allegedly asked a cop, "Am I dead?" and, "Was I driving?"

He also whined to an EMT, "Don’t call my mother, she’s going to be upset," court papers said.

According to Manhattan District Attorney Cyrus R. Vance, Jr., the charges against Martin are:
-Aggravated Vehicular Assault, a class C felony, 2 counts
-Assault in the Second Degree, a class D felony, 2 counts
-Driving While Ability Impaired By Combination of Drugs and Alcohol, a class E felony, 1 count
-Driving While Impaired by the Use of a Drug, a class E felony, 1 count
-Criminal Possession of a Controlled Substance in the Seventh Degree, a class A misdemeanor, 1 count

Fingers crossed that this dirtbag gets the book thrown at him! Maximum penalty for each offense, consecutive years to serve (not concurrent)!

Douchebag. I second Anon. 7:09, give this creep the max and let him be a boytoy in Riker's.

He's about to find out why they call it 'The Slammer.'

Does anyone know whether he's still locked up vs out on bail? Also agree rape is a terrible thing, whether in prison or otherwise. Prison rape jokes are tasteless and inhuman no matter the subject of them.

As Andrea Dworkin pointed out, we're a rape culture. As evidence I show how rape is used as humor. Always gets a laugh 'don't drop your soap in jail' instead of outrage. Cops use this form of rape to intimidate and threaten people. "I'm going to put you in a cell with a big guy from Harlem who likes smart and good looking white men". but we need to drop bombs on children while they sleep and call the killers heros to defend this way of life!

Funny how the cut-emloose, it's not the poor boys fault lefties get tough on crime when it happens on their block.

I don't understand any humor about this situation. Think about the man injured by this driver before writing pithy comments. We should all contact local politicians to insure his conviction. The lack of policing drunk drivers needs to be rectified.

It was never my intention to try and be "humorous" about this situation - I meant every word I said about what I think that turd deserves. And believe me,I was restraining myself.

Sorry Gojira, prison rape jokes aren't funny. And as a civilized society, if we decide someone belongs in jail (as this guy does), rape shouldn't be part of the equation. Our Constitution has that pesky prohibition against "cruel and unusual punishment."

NYC Dept of Corrections website indicates he bailed out on July 10, about 3 weeks after the incident.

As for the not guilty plea, that's standard at the initial arraignment. If the top charge is a Class C felony, the maximum would be 3-15 yrs, the minimum 1-5.

I don't think consecutive time is possible for different counts as it was a single incident.

Easy enough to agree with the previous commentors about prison-rape jokes but did one of them really have to take the name "BJ" ??

Love when folks tell me what's "not funny". Thanks but think I'll decide that for myself.

@BJ - And I think plowing into some poor guy innocently standing by his flowers and sending him into a coma for God knows how long, for impacting his life in all likelihood forever, and for putting his family in a position of being forced to pay massive amounts of money that they most certainly do not have for his medical bills, is far more cruel and unusual punishment than anything that drugged-up, pathetic dick will ever have to endure. And I repeat - I was NOT TRYING TO BE FUNNY, so stop ascribing "humorous" as an adjective to my comments. Thank you.

Per 4:09 yes must agree, am picturing myself laughing heartily, reading presumptuous " that is not funny" comment, and quickly shutting down that inappropriate giggle!

Apologies to Gojira for misinterpreting your implicit support for prison rape as an attempt at humor. I'm just against prison rape, even for scumbags.