The great Stanley Kubrick was born on this date in 1928 in the Bronx.

Before his filmmaking career, he worked as a commercial photographer... he shot the NYC subways for LOOK Magazine in 1946... 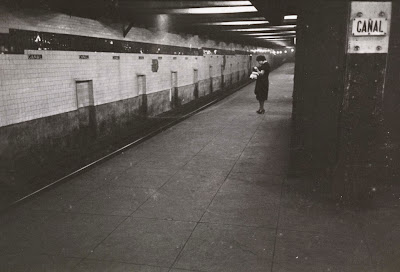 [Museum of the City of New York]

You can find this photo and several others at the Museum of the City of New York blog.

Hes the best, there is a longer version of this that is very interesting, and has a lot of NYC stuff in it.

I watch DR Strangelove once a week pretty much.

Barry Lyndon was a great movie too. One of the rare movies that, wlthough mindnumbingly dull you never wanted it to end.

A Killer's Kiss is an NYC noir gem.

Boilerplate Palooka-meets-gal-in-trouble script, but Kubrick's signature is all over this. Beautiful.

Look at how incredibly CLEAN that station is... today its a virtual toilet.

The Shining was great too, or as I like to call it, The FU Stephen King-ing.

A.I. Artificial Intelligence, also an overlooked Kubrick film, albeit he only directed half of it. And one can see where Spielberg picked up in the film.

Paths of Glory and The Killing...

Eyes WIde Shut was always a guilty pleasure. Glad to know someone else appreciates it!