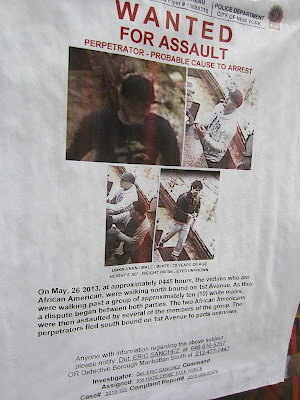 Twin brothers were attacked by a group of men early May 26 on First Avenue near East First Street. (BoweryBoogie first reported the incident here.)

Flyers are now up around the area in which the incident took place... As the flyers show, the victims are black. The men wanted for the attack are white, and the group numbered as many as 10. The NYPD assigned the incident to the Hate Crime Task Force.

Previously.
Posted by Grieve at 10:46 AM

Thank you for linking to BB's story. It's so frustrating to read about the effort it took on their part to force NYPD to look for video evidence... essentially force them to do their damn jobs. It's the same story over and over again. Cyclist / pedestrian gets hit by a car? No criminality suspected, case closed. Two black men get beat up in public? "Not all delis have cameras," case closed. I wish the family perseverance and hope they get justice.

I'm also curious why NYPD is now suspecting a hate crime; did the assailants say something anti-gay (if they assumed the brothers were a couple), or something racist? I suspect there must be something else beyond the fact that the assailants and the victims were of different races.

But then the transients would see the city isn't the crime-free shopping utopia they think it is and take their parents money elsewhere.

from the linked story: “we are going classify this as gang related”

This is structural racism, this story needs to be repeated. Ray Kelly is going to be homeland secretary, don't let him get away with this, this response is pure Kelly.

Also, its worth pointing out that our "party zone" attracts people like this to our neighborhood--boozy drunken thugs.