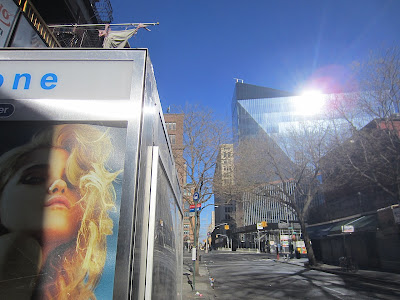 Now the firm is facing one of its biggest challenges yet: representing developer Edward Minskoff in his effort to lease up his new 400,000-square-foot development at 51 Astor Place in the East Village. The building, which opened in May, has yet to sign a single tenant.

And there were a few close calls, such as Microsoft, which opted for Times Square, and Facebook, which decided to lease space directly across the street at 770 Broadway in Midtown South.

Regardless, Paul Glickman, a vice chairman at Jones Lang, told the Journal that "70 percent of the building is close to being leased but declined to name tenants."

Sources said that developer Edward Minskoff "took a risk by developing a modern office tower in a neighborhood best known for funky older buildings — in high demand among technology firms and media businesses."

East Village — the new Midtown?
Posted by Grieve at 5:30 AM

And I am close to 70% a millionaire - in my dreams. Not unlike the leasing situation in this hideous thing.

No demand. Plenty of supply.

Build it and they will come, Minskoff thought. If I recall correctly, the discussion here was that rents were too high and the kind of tenants that Minskoff was trying to attract seem to prefer re-purposed older buildings, not shiny glass towers.

I'm not in real estate so I'm not sure about this, but turning Astor place into 6th Ave by putting up buildings like this may also hurt Astor Place's cachet with tech and ad agency-types.

Cool - a vacant death star. When the rents get down to $950 a month (plus utils of course), I'll make them an offer.

The damage is done, but I have guilt for wishing so much bad on this place. May they never book a single tenant.

"Ideal for a single family mansion," says a glossy, full color (black, off-black, blacker and glare) ad for it I received in my mail this afternoon.

It continues "in an elegant neighborhood redefining itself as the eastern rival to NoHo, NoPlace." Unbelievable what realtors will write to sell a space!

My company looked into this, its expensive and not located conveniently for commuters. Someone will show up, I'm surprised the NYU Administration doesn't move in, its super expensive and has nothing to do with education, right up their alley.

I'm confused. Isn't 51 Astor still being built? They should have tenants by now, but I don't recall it being opened by May 2013. I'm pretty sure there's a ton of construction going on and it doesn't look complete at all. They put up benches and stuff, but open?

Am I confusing it with another building?

It looks like it won't be too hard to take down, a 10-in-1 tool should do the trick. I would volunteer to help.