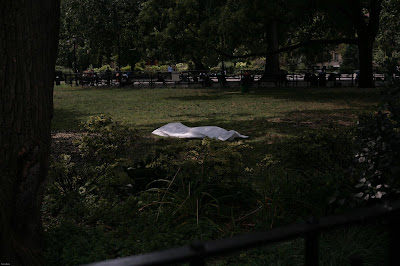 A sad scene this morning. Multiple readers pass along word of a police investigation in the lawn at Tompkins Square Park early this morning...

According to witnesses, someone discovered the body of a man in his mid-twenties. Early word is that this was the result of a drug overdose. However, this has not been confirmed.

Will update later when we hear more details...

The man who found the body contacted Gothamist...

I am the person who noticed him, found him unresponsive, and knew he looked dead. I didn't touch him and asked around if anyone knew him because he was in a bad way, and some people said they think he had been there like that all night.

And today people are sunbathing on that same grass.

So tragic... I feel awful, because often we pass someone on the street and they seem maybe asleep, maybe unconscious, and I never really know how to act in those situations. I tried asking if people needed help in such situations, but some folks get aggressive if they're awoken and under the influence...

Anybody have a good rule of thumb as to when try to help / "wake" someone, and when to ignore?

RIP to the dead person. No matter who you were, you are gone too soon.

This unfortunate person was finally picked up by the coroner's van at around 12:30...which means he lay there after being discovered for 4 hours... and not three seconds later, the lawn started to fill up with sunbathers... *shudder*

I've seen people shooting up on the benches, so its not too too surprising there would be an OD in the park, if thats what it was.

To Anon 3:27 -- my own rule of thumb is to not try to awaken the person but to call 911 instead. I describe the person, approximate age, and state that I don't know if they are drunk or had a heart attack or what but they are just lying there in the street not moving.

I guess if it were a child I might take a more direct approach but with a young adult I'd rather not end up needing 911 myself if things go bad.

So I was in the park at the same time a dead body was in the vicinity (unwittingly of course). Oh my gosh.

This was overheard by a friend in Tompkins Square Park in relation to this man being found dead in the park... Was this a homeless person or was it somebody ?

Wow, I hope these junkies aren't leaving their needles behind them. Kids play everywhere around that park. I've noticed that the Parks Dept. shack by the pool has an "If you find a needle" sign posted on the inside of the door! My kid runs barefoot around that part of the park pretty much daily.

What a tragic, tragic story. RIP dear one.

Anonymous, you let your kid run around Tompkins Square Park barefoot? STOP THAT. Seriously. I have seen needles, broken glass, drug baggies, band-aids, and all manner of horrible shit in that grass. Put some shoes on and save the barefoot time for another time and location.

I wouldn't let my kid run around barefoot in a bouncy castle, let alone Drug Park.

Well, the sprinkler park/pool area is gated and locked up at night. So hopefully it's not too needley. And no, there's really no way to make your kid wear shoes when they're darting back and forth from a pool

Did they ever find out who the guy was?

His name was Cheyenne Rubin. He was from Sullivan County, NY.

he was my friend and ill miss him

Before any of you talk negatively about him I knew him and you haven't walked in his shoes! Remember he was someones son....friend.....not to mention human.....if u have ur better than comments u wanna shout from ur soapbox....remember hard times and bad things can happen to all of us! Your in my heart Chey!

Crusties In The News: The guy who OD'ed in the park last week was (surprise!) a crusty, according to this interview with three Crusties in The Villager. And they are not shy about their owndrug and alcohol abuse, even though is has almost killed them many times:

“We drink heavily,” Ernesto stated matter of factly. “We do drugs, all kinds of drugs. I drink a lot of alcohol but I take drugs moderately. I do try everything because I want to do everything for the sake of doing it.”

However, speaking to the dangers of using drugs, a young man — word has it, he was a crusty — was found dead of an overdose in the park this past week.

Just Say No To Crusties, it might save a life....

Che Rubin was my best friend, no words can describe the lost I feel in my heart,one of the kindest, most gentil soles you could of ever met, he will be missed deeply, sad friend

I wish people could be more considered my mom found out by reading the paper u have to remember your are talking about someones child and addiction does not discriminate! Ill forever miss my brother hes never meet my daughter and will not be able to met my son due on dec 17 its heartbreaking he struggled with a serious mental illness on top of addiction , its hard for anyone to beat addiction especially with schizophrenia stop judging! His life was taken to soon but his suffering is over he lived a hard life but was loved by many ...life is short live it and love it before its to late I havent seen my family in years because I was moved to alaska to live with my aunt in hopes of a better life but the same evil is everywhere instead of judging have compassion and try to make a difference

I've known this person for many years. About since the age of 12. I visited him in pysciatric wards and to ed to help him as much as I could. He will be missed.