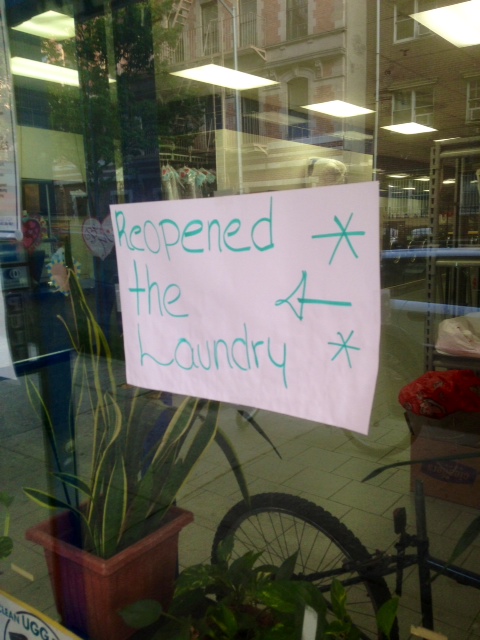 Wow. Klean & Kleaner closed down on East Second Street this past weekend ... the laundromat here between Avenue A and Avenue B had been on the market for use as a bar-restaurant...

Word spread among readers yesterday that a laundromat is back. EVG Facebook friend Edward Arrocha passed along the following: "Klean & Kleaner will reopen as a laundromat. It was sold to a different owner and the washing machine doors were returned. I do not know if it will be Klean & Kleaner or if it will have a change of name."

Indeed, a handwritten sign on the door yesterday courtesy of RyanAvenueA notes the return of the laundromat. No word on how many of the Klean & Kleaner staff will catch on with jobs here.

As previously reported, the owners of the Living Room on Ludlow Street were hoping to take over this space, though the CB3/SLA committee turned down that proposal in May.

BoweryBoogie reported this from that CB3 meeting:

As it stands, this stretch of Second Street was grandfathered into a general residence district, and doesn’t allow for any performances with cover charges. There was reportedly contact with the DOB to settle this issue, but the Living Room hadn’t heard any news as of last night. And they didn’t have the luxury of laying over the application another month due to landlord/lease constraints, so a vote had to transpire.

Word is the landlord figured that the space would sit empty ... and found a new owner willing to pay higher rents to run a laundromat.
Posted by Grieve at 6:00 AM

Email ThisBlogThis!Share to TwitterShare to FacebookShare to Pinterest
Labels: Klean and Kleaner, laundromats

So, Half a victory??

Or is it really a laundromat? Maybe there's now a secret bar there, perhaps named Jane's Sweet Suds -- in honor of the pioneer of such gimmick -- and if you give the attendant a wink and a nod, she'd give you a special coin to put into a washing machine that'll open-up and then glide one through a door to the entrance of the speakeasy bar.

Or maybe another laundry bar and bistro http://evgrieve.com/2013/02/a-laundry-bistro-in-works-for-east.html.

And since EV is becoming a college town, maybe it'll be laundry and a bar, just like Washbangers.