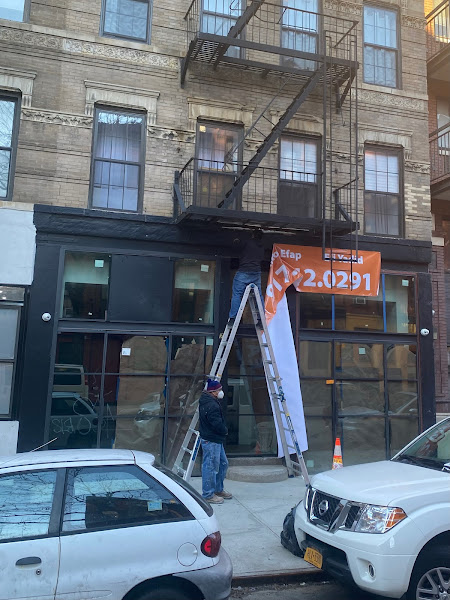 Photos by Steven
Yesterday saw the arrival of a for-lease sign outside 77 E. Third St. between First Avenue and Second Avenue — aka the former NYC HQ of the Hells Angels Motorcycle Club.
Said one nearby resident who lived across the street from the property, "Never thought I’d see a sign like this!"
There are two retail spaces available here... in space where the fellows had their bar and entertainment area and storage space... 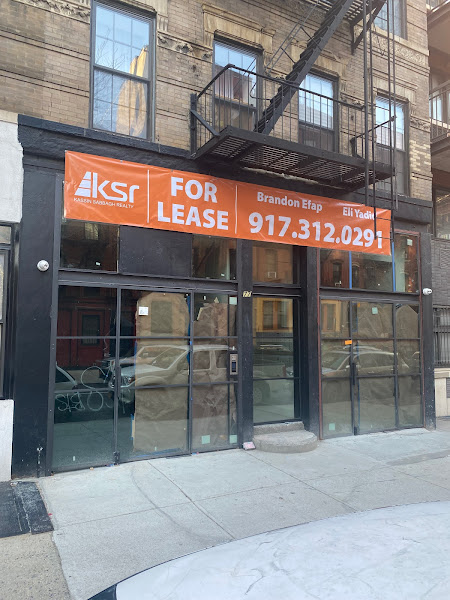 There's not much info on the KSR listing ("located in the Bowery district") ... there isn't any mention of the former occupants (though there is an older street view showing the HA logo and painting of the motorcycle-helmeted skeleton atop the flaming skulls).
There's also a very un-Hells-Angels-esque conceptual rendering of the spaces... 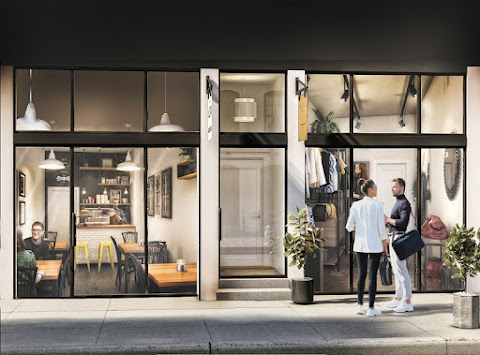 The plaque near the entrance that read "In memory of Big Vinny 1948-1979: 'When in doubt, knock 'em out'" left with the remaining members in 2019. (Vincent "Big Vinny" Gerolamo was the Chapter president who allegedly pushed his girlfriend to her death from the roof here in 1978. He died the next year from injuries suffered in a fight with an Angel in Oakland, Calif.)
Anyway, as we've been reporting, the 6-story building underwent a gut renovation in the past 20 months. In total, there are now 22 residential units here. (The available apartments have a monthly ask in the $4k range — that's for a studio, per the listings at Better Living Properties.)
In June 2019, real-estate investor Nathan Blatter — the new owner of the building — had some ideas for the storefronts here. As he told the Post: "Blatter said he has been contacted by someone curating a Hells Angels museum, and another about a barbershop." He later flipped the building to Better Living Properties.
The last of the members and/or their entourage moved out of No. 77 at the end of March 2019 from the clubhouse that the Hells Angels had in their possession since 1969. They reportedly ended up in Throggs Neck in the Bronx.
Previously on EV Grieve:
• Photo exclusive: Take a look inside the former Hells Angels clubhouse on 3rd Street
• The Hells Angels unveil new line of defense for their bench
Posted by Grieve at 5:00 AM

AFFA block was safe and secure 24/7

I don't know, I never had problem with them.

That said, I do not miss anything about the former residents except for their door.

Can I finally park in front now?

Can we finally stop caring what happens at this address?

Unless you were Mary Ann Campbell. RIP.

The storefront should be used as a shooting gallery. Keepin’ it real.

My husband lived at 87 East 3rd and before he took that apartment my friend did. I was always aware who was safe and who was not. As a woman, a kid would keep you safe. Sort of pathetic. For gay and trans people you MIGHT be ok if you lived on the block, same goes for people of color. They'd say hello to me too and also one of my friends had her back broken by a couple of the wives.

Agree. Me, my three sisters and younger brother grew up on 70 east 3rd street, across from the Hells Angels building. We never had any problems with them. After we grew up and left, they would greet and help my mom with carrying her groceries. We had the safest block in the neighborhood. So long as you didn't touch their bikes and didn't mess with them, they would leave you alone.