Missing in the East Village: the fruit vendor on 1st Avenue; the taco cart on 2nd Street 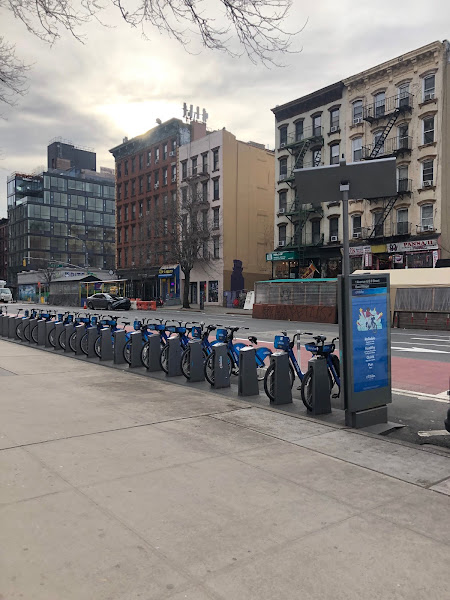 Reader queries have arrived this week... asking about some now-missing regulars around the neighborhood.
For starters, the fruit vendor has not been at his usual post on the SE corner of First Avenue and Sixth Street for several days. (Top photo.)
The vendor had been toughing it out during the winter months, but now everything is gone. (H/T Goggla!)
There was some speculation — over the clickety-clack of typewriters in the EVG newsroom — that perhaps the Citi Bike docking station prompted the departure and, perhaps, relocation. While the dock isn't new, its arrival meant the vendor needed to find parking elsewhere for his van with supplies to keep the stand stocked with fruit and vegetables.
Meanwhile, on the NW corner of Second Street at Avenue A... 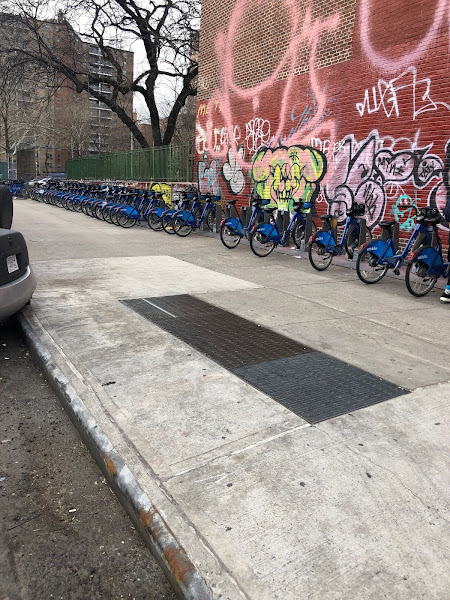 ... the whereabouts of the Tacos Cholula cart is unknown. One grieving regular puts the absence now at a few weeks. We have our best people looking into this.
Posted by Grieve at 5:30 AM

Love Your Writing EVG !
The Best !

As long as we have more citibike docking stations.

Really want the Tacos Cholula cart to come back!!!

I wonder if the fruit vendors are independent operators or working for a larger organization. The other day, I noticed that vendor near Trader Joe's on Ave A was missing.

Fruitmen please come back, we need you!

From Carlina River's recent boilerplate response to a letter re Open Restaurants: "the need for thorough regulation and comprehensive oversight to account for the multiple factors involved in changes to our streetscapes, including – and especially – how those changes impact neighbors."
It doesn't seem anyone pays any attention to how these docks or every other corporate give-away IMPACT NEIGHBORS.

You are right recently the citibike stations hav gotten out of control. Corporate takeover of public property. I like them to some extent but there are massive stations every other block now and it's just for the ad dollars.

And the LinkNYC kiosks! Last time I counted there were 14 on 2nd Ave. between 14th St. & 6th St. Guess how many there are on Madison Ave above 57th St.? If you guessed NONE, you're off by 1. I have no idea why inebriated, late night open-restaurant "patrons" need 14 of them just to get an Uber to take them home.

It looks as if many of the Fruit men on 2nd Ave from 23 to at least 33rd street are 'supported' by one man. Those are all connected. Not sure of the others.

So apparently the taco cart is “broken” but they hope to be back.

Ah, but everybody was so enthused, so "rah-rah" about citibike docks when it was a new idea, and nobody believed those who foresaw possible bad outcomes.

NOW, when we're hopelessly over-saturated with those docking stations, people *begin* to go "Oh, wow, all those docks"!

Well, DUH, it was clear this was going to be a corporate take-over of public space (streets AND sidewalks) from the get-go.

Who has the last laugh on this? Citibike does, laughing all the way to the bank, having permanently inconvenienced untold New Yorkers, you suckas!