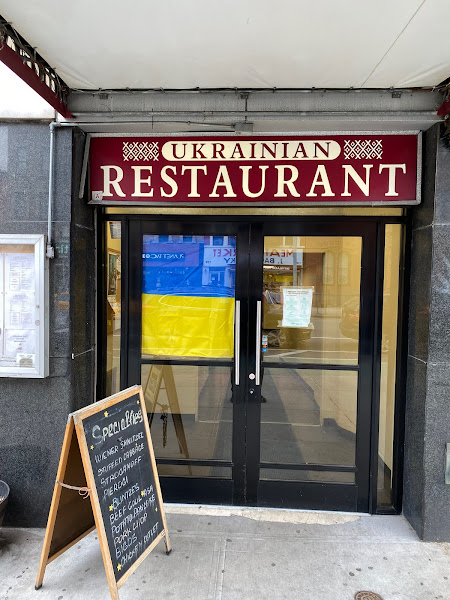 As the Russian invasion of Ukraine enters its third day, we've heard from readers asking what they can do to help show their support.
The East Village-based Ukrainian Congress Committee of America has launched a #SupportUkraine Humanitarian Effort with AICM-Ukraine. (Link here.)
Andrij V. Dobriansky, director of communications and media at the Ukrainian Congress Committee of America, told us that they are working with UN-registered NGOs.
"We are using these donations to get supplies into Ukraine that can be more easily transported: bandages, diapers, emergency pharmaceutical packs — all items in need for refugees making a long journey," he said.
Meanwhile, yesterday, a group of local elected officials, clergy and community leaders gathered at the Ukrainian National Home on Second Avenue between St. Mark's Place and Ninth Street to stand in solidarity with Ukrainian New Yorkers.

Today, I rallied with the Ukrainian-American community here in NYC for peace above all else. I stand and will continue to stand with this community and the people of Ukraine throughout this. pic.twitter.com/pXZupKAO1e

Standing today in solidarity with leaders of NYC's Ukrainian community, calling for action in the face of Putin's reprehensible war.

Honored to share space and solidarity with colleagues and friends in Little Ukraine today. We stand resolute with the people of Ukraine and their families demanding immediate action against totalitarian, premeditated war.

Outside Veselka on Second Avenue and Ninth Street, co-owner Jason Birchard talked with reporters.
"My grandfather started this. He was an immigrant from Ukraine escaping Russian aggression in the 1940s," Birchard told CBS News. "They're frightened, they're scared, there's a state of shock. People don't know what to do. It's not only a war against Ukraine. It's a war against the free world." 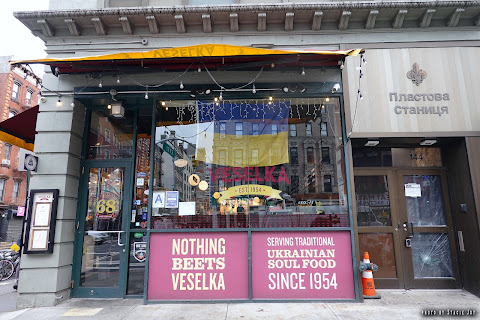 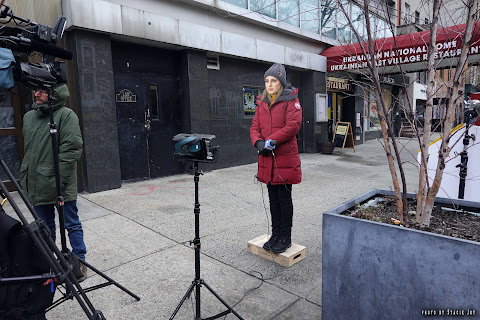 Above photos from yesterday by Stacie Joy
Top photo by Steven
Posted by Grieve at 10:30 AM

Streecha was packed and sold out by 3pm.

If anyone is paying attention to this I suggest that you send most of this aid to countries that are now seeing large numbers of refugees , mostly women and children , fleeing the Russians. For anything going into the country food and medical supplies would be best since most men are now in the Ukrainian army and they will need help.

I suggest that everyone does something to get involved in this cause now, because it looks like Covid BrainPutin is trying to start World War III with his illegal invasion. He really has underestimated the Ukrainians, and their popularity around the world. The Europeans just banned all Russian flights from their airspace, cut off acesss to their banks, and are finally banning the RT network, Putin’s propaganda channel, which has been spreading lies around the world for years. Next we should cancel Fox News, Tucker Carlson, Mocheal Flynn, Jill Stein (who once dined with Putin and Flynn, and still spreads Russian propaganda) and Tulsi Gabbard among others who have been cheering Putin on. So go to Veselka and have some pierogies and borscht, or donate to one of these local charities, if not for Ukrainians then do it for yourself, because you could be the next name on Putin’s list.