Showing the former P.S. 64 some love during rally and press conference this Sunday 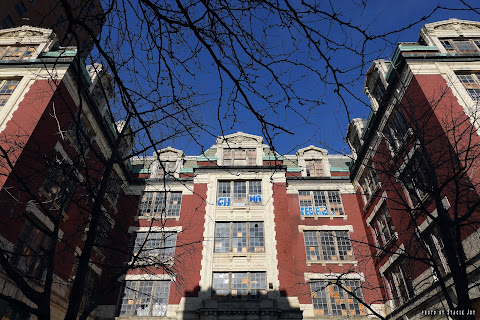 Photo from last month by Stacie Joy
With the fate of the long-vacant former P.S. 64 at 605 E. Ninth St. up in the air, a group of locals is hosting a rally and press conference here on Sunday afternoon between Avenue B and Avenue C.
Last month, Supreme Court Justice Melissa Crane ruled that Madison Realty Capital can move forward with a foreclosure against building landlord Gregg Singer after years of delay.
When news circulated that the forclosure could move forward, several sources EVG spoke with said that the news was not unexpected. However, at this point, sources said, what happens next, or what this means for the future of the building, is anyone's guess.
Here's more about the rally Sunday afternoon via the EVG inbox:

Join SOCCC-64, elected officials, community orgs, artists and activists this Valentine's Day eve to ask the City to return our beloved community and cultural center, CHARAS / El Bohio.
This is an urgent call, as developer Gregg Singer, who purchased the building that housed CHARAS, former P.S. 64 at public auction in 2001, is now in default of his mortgage and is in foreclosure!
We are rallying to urge the City to work with us to return our center, and we need everyone's help to make it a reality. 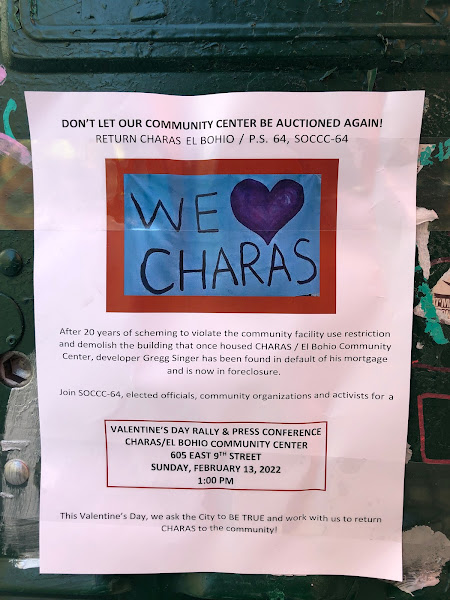 The rally starts at 1 p.m.
Some history. The building became the Charas/El Bohio Community Center after the school left in 1977. The group was eventually evicted in December 2001 when Singer took over as the landlord.
Singer, who bought the property from the city during an auction in 1998 for $3.15 million, has wanted to turn the building into a dorm. (The DOB maintains a Stop Work Order on the property.)
There has been a call to return the building for community use in years past. Given this movement some hope: then-Mayor de Blasio's statement at a Town Hall on Oct. 12, 2017, that the city would take steps to reacquire the building. According to published reports, the Mayor said he'd work to "right the wrongs of the past."
Those plans have never materialized, and it has sat empty these past 20-plus years.
Posted by Grieve at 5:30 AM

and Carlina is already lining up her financial backers for a crack at developing it for luxury condos.

Let's get our Community Center back now. It was empty for over 20 years. The speculator on whom it is now foreclosed had prevented a whole generation from using it. Justice for the Lower East Side. Viva Charas/El Bohio!

turn on tune in take over