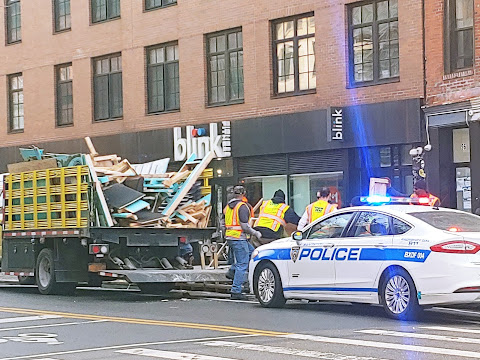 City crews are on the NE corner of Avenue A and Sixth Street this morning dismantling the abandoned dining shed outside the now-closed August Laura. (Thanks Goggla for the pic!)
As of this writing, they have yet to remove the restaurant's longer structure on Sixth Street.
As previously reported several readers-residents have complained about the structure on the Sixth Street side. The bar-restaurant August Laura closed in the corner space here in early December. Neighbors say the space has become "a 24-hour shooting gallery."
Complaints to the city on these two structures date to Dec. 23.
To be continued...
Updated 9:46 a..m.
Sixth Street side is coming down... pics via Goggla.... 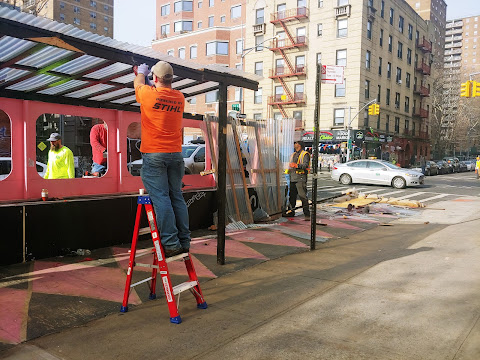 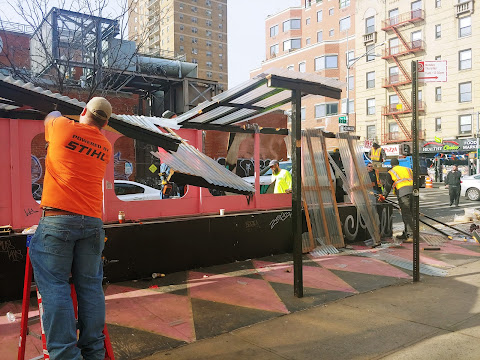 Updated 2 p.m.
And later... thanks to Steven for the photo on the Sixth Street side... 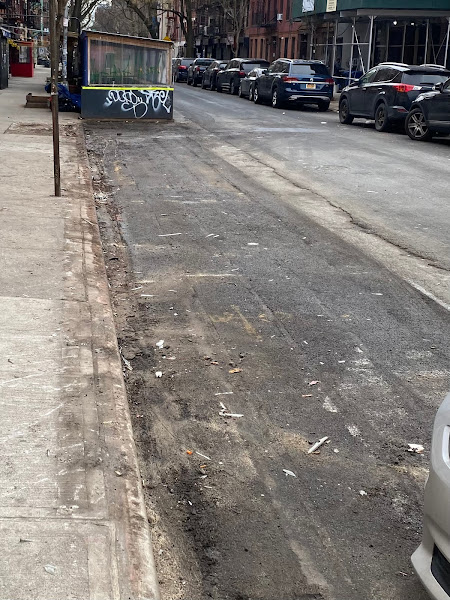 Thanks for the welcome news, although I’m sorry that the city has to pay for this, and will have to pay to remove the dozens of other abandoned shacks in the EV, not to mention around the rest of the city.

I think the shacks were a good idea back before the vaccines came along, and I hope that restaurants will be permitted to use some sidewalk space for al fresco dining in the good weather. But it’s time for us to stop kidding ourselves that we enjoy eating in these cold, dank(and rat-infested)plywood shacks in sitting gutters of the street.

I hope they bill the building owner for doing this.

Amazing that our tax dollars get to pay for this. The owners of August Laura should be handed the bill and told to pay up or face a judge.

Time to clean up our streets and get rid of these eyesores. Fun while it lasted but now feels gross and unsightly.

Well, who exactly is going to be cleaning the red/black diamonds on the concrete? I'm just repeatedly upset every time I walk past these and thinking of how cruel and inconsiderate people are. So much sad, every day.

Free parking is the real eyesore. Make 100% of parking metered.

If nothing else, restaurants should *have to* post a bond for clean-up in case the place closes.

Supposedly the city is continuing outdoor dining, but it wont be these plywood structures. Seems like a good compromise.

I feel the same way about citibike docking stations.

How 'bout getting rid of all the junk a homeless person parked and wrapped on the corner of first ave and ninth street, both on the sidewalk in front of the Chinese restaurant and locked onto the bicylce rack in the street's safety zone? A real eyesore! Been there forever!

Thanks for the link, ed anger. This is a step in the right direction, but the earth walls and board flooring will still be a problem, as those create the two spots favored by the rats: a place to burrow in the earth, and shelter under the floor with easy egress. I really think it’s instead best to give restaurants some space on the sidewalks in good weather, so that they can bring the tables in at night and in that way not give the rats anything to nest in. Requiring that they bring the tables in by midnight on weekends and by 11:00 on weekdays would be good for the folks up above too.

this was a proposal to satisfy both sides... unfortunately no one is really satisfied with it so it probably wont happen. Taking away the roofs doesnt help the businesses who use that space as an extension of their restaurant (looking at you minca) and it also doesnt satisfy the parking/rat haven.

Everything is in flux with the proposals. Final do's and dont's are far from decided

You should count your blessings that you have a warm cozy home. Instead of beating on this homeless person why don’t you drop her off a meal. You’re comment is heartless

Walked by the dining structure outside the restaurant next to Juicy Lucy on Ave A today around 4:30 p.m. and was greeted by a nice big rat friend running under it and into the garbage stacked next to it. So gross. And before you comment telling me to move to the 'burbs if I don't want to see rats... I've lived in NYC, in this neighborhood, my whole life so yeah, I'm no stranger to rats. But HOW anyone can eat at these ramshackle grafitti-filled structures next to trash and vermin and the smell is just...no.

Nice, now the free space can be turned into a Citibike station.

@7:51PM: And citibike docks are FREE PARKING for bikes. Why should THEY get free parking if cars don't? Maybe we should meter every single citibike dock independently.

Can't wait to the day to all these sheds are gone. Permanently.

Why knock someone when they already down? We should thank our lucky stars we are not in that position, especially during the winter. Who knows how they got to this level? A little kindness and insight would work wonders. Imagine living on the streets without resources and support? A simple gesture goes a long way.

I do think the former merchant whom left should have addressed the issue of dismantling the shed once they vacated the premises and taken responsibility to of course pay for it. But we don't live in a perfect or a fair world. Who ends up paying for it? We do as tax payers and the city at large.

@10:04 Citibikes are used by many people, not owned by a single individual, and they don't poison the air we breathe and contribute to climate change. Citibikes cause some problems, but they aren't destroying the planet, not to mention the problematic international politics our reliance on fossil fuels encourages.

Consider for a moment just how many parking spaces in Manhattan have been lost to dining sheds and citibike stations....the number? Over 5000. How many drivers have gone round and round and round looking for a parking space so they can dine, shop and club. That number is at least double when you consider at least two people to a car that now cannot spend their money in local establishments. Money desperately needed by restaurants and local merchants. Worse still, those people, having trolled the neighborhoods for a parking space will not return for a repeat performance. Restaurants are open now...you can eat inside. Time for these atrocities to go.

Sheds mean garbage pushed in front of other buildings/stores, some sheds block visibility of neighboring storefronts, sheds make delivery difficult.
Retail stores got no help from the City - but the City has done everything for the restaurant industry.