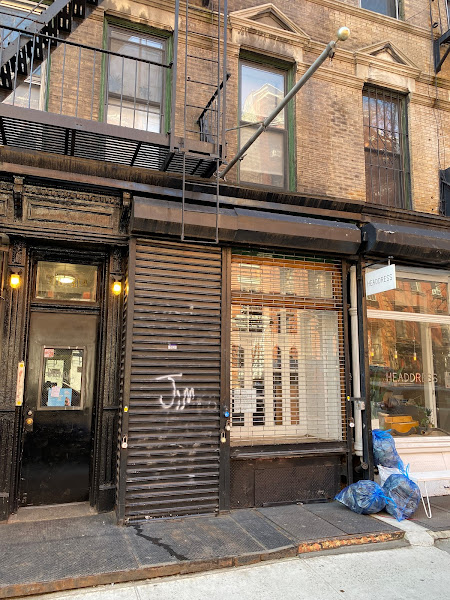 Photos by Steven
As a follow-up to our previous post (from Feb. 7) about the Eileen Fisher storefront on Ninth Street: The shop has made its closure official.
The Eileen Fisher sign was removed from the storefront ... and there's now a note on the front door  ... 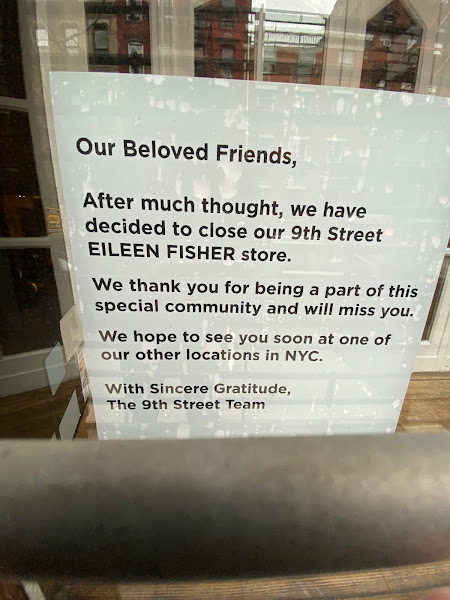 The note reads in part:

After much thought, we have decided to close our 9th Street Eileen Fisher store.
We thank you for being part of this special community and will miss you.

The outpost had been closed since late August for "building maintenance." There were rumors the shop had closed in early February, though there wasn't anything official about it made public.

This was Fisher's first location, opening in 1987. Her brand grew to 50-plus shops around the country and sales in various department stores.

As Manhattan Sideways wrote this about the Ninth Street outpost: "[I]t is not even owned by the larger corporation behind the other shops, but rather by Eileen Fisher herself. Sample garments are sold here – some that never made it into production. Many of the pieces found here are different from what is in the rest of the line each season."
Posted by Grieve at 5:00 AM

I'm sorry to see her go. She was an elder stateswoman of such a special block. The holes caused by wonderful Vera Meat and March Hare hurt too.

Sad to see it go, considering the history especially. I feel like this block is changing so much lately, losing so many amazing little shops, ex:Huminksa, Verameat, now this. What else am I missing?

The 9th Street Team will be DEARLY missed (and the sales and sale basket too!).

This makes me so sad. The sales team was the absolute best in the neighborhood. I will miss them in the sandbox in the front of the store. It was always so great to stop in there and chat for a while. Danielle and team you will be missed!

This was my one stop in NYC whether I was there, whether it was for a few hours or a week. The staff was incredibly warm and helpful and remembered my birthday with a postcard every year. PLEASE reconsider re-opening this kind of store, featuring samples and even seconds. It will be SORELY missed.

Of all the stores that I’ll miss, this is number one. The selection, the prices, and the staff - all could not have been better. To make it doubly bad, the EF store in East Hampton, where I also live, closed permanently at the same time, with none anywhere in the vicinity. Thank goodness I already have a huge selection of EH clothes that should last me for a lifetime. Boo hoo!