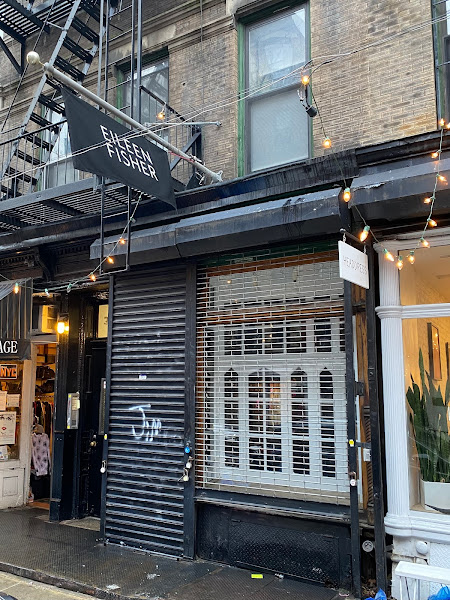 Updated Feb. 17: The closure is now official.
Since late August, the Eileen Fisher store at 314 E. Ninth St. has been closed between First Avenue and Second Avenue.
According to an outgoing message on the shop's phone, this is a temporary closure for "building maintenance." (One local said it was related to a mold issue.) Rumors were circulating late last week that this shop has closed for good. This location is not listed on the Eileen Fisher website, and Google notes it as permanently closed.
This was Fisher's first location, opening in 1987 (per this New Yorker feature on her from 2013). Her brand grew to 50-plus shops around the country and sales in various department stores.
Manhattan Sideways wrote this about the Ninth Street outpost: "[I]t is not even owned by the larger corporation behind the other shops, but rather by Eileen Fisher herself. Sample garments are sold here – some that never made it into production. Many of the pieces found here are different from what is in the rest of the line each season."
Thanks to Steven for the photo
Posted by Grieve at 4:58 AM

Oh no! If there was one business that I thought would weather the pandemic it was this one. It was the original store and has a huge corporation behind it. Great, professional, long time staff who were from the neighborhood. There were always sale items much less the boxes full of great deals at the front of the store. I always stopped in when on 9th. EF store and staff, you will be missed.

Wait a second. There is no actual notice of it closing but for Google. The phone voice mail still says temporarily closed. I am really hoping that is the case and that it opens again soon. Come on Eileen, keep it open please! It will be a real loss to the neighborhood.

That was intentional, wasn't it?

As I understand it, the Eileen Fisher store on Ninth Street is NOT part of the franchise. I so hope they reopen there - I have been for decades, a basket rat at that store. I love her clothing and and the people who work in the store. Fingers crossed.