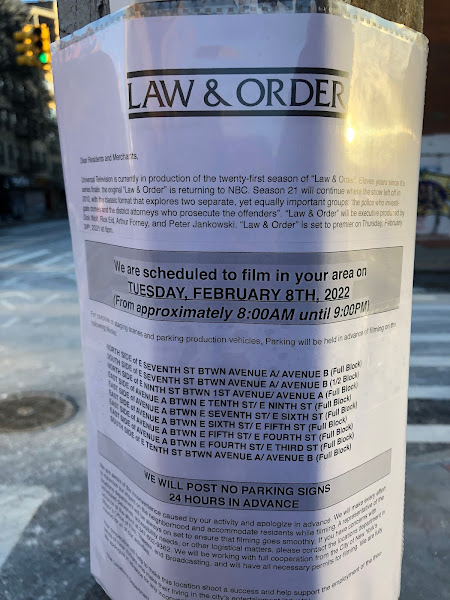 If you've watched even 15 minutes of the Winter Olympics on NBC, then you've likely seen a promo for the return of the original "Law & Order" on Feb. 24.
Expect to see part of the East Village in the upcoming season. The L&O crew will be setting up for a shoot on Tuesday along Avenue A and various side streets between 10th and Third, per the posted signage. (And vehicles need to be moved tomorrow by 3. Photo below by Steven.) 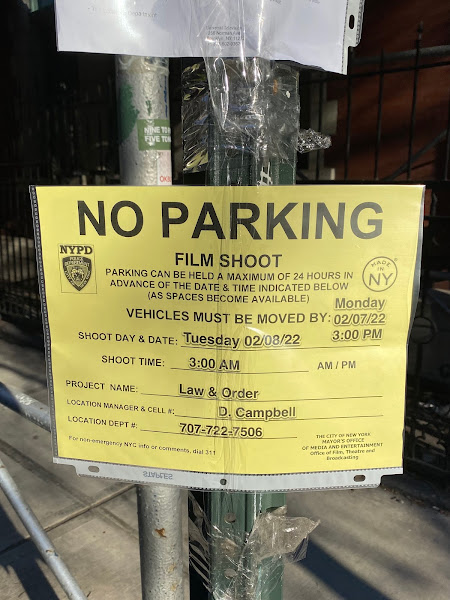 This 21st season will once again feature Sam Waterston as Jack McCoy ... new cast members include Odelya Halevi as ADA Samantha Maroun, Jeffrey Donovan as Det. Frank Cosgrove and Hugh Dancy as senior prosecutorial assistant Nathan Price.
The Emmy-winning series originally ran for 20 seasons on NBC, from 1990 to 2010, with 456 episodes, spawning 36 four spinoffs and a movie. The franchise has been a regular presence on EV streets during its run.
And for some nostalgia, here's the intro to the "Law & Order" pilot episode from 1990...
Posted by Grieve at 4:00 PM

Email ThisBlogThis!Share to TwitterShare to FacebookShare to Pinterest
Labels: filming around the East Village, Law & Order, Law and Order

We could only wish

Are you kidding? I bet we get the patented L&O opening scene with someone finding a body in one.

Hahahaha love the above comments!

When I used to live on E 3rd St. between A and B they used to film in my building and on that block a lot.They were a big pain in the ass and often tried to stop me from going inside the building to my own apt.I told them I paid rent there and they did not so I was going to my apartment whether they liked it or not.

Sorry John, but no one has ever been prevented from entering their building. Being asked to wait for moment while a scene is being shot is very different from being “prevented” from entering your home. Doesn’t happen.

Yes it does happen. Arrogant crew members think they own the sidewalk. I've seen this happen myself. These people need to respect the residents.

We need some Law and Order for the film crews!

Their crews are exceptionally loud! Why is their equipment beeping so loudly at 7am? Are there not noise ordinances preventing that?