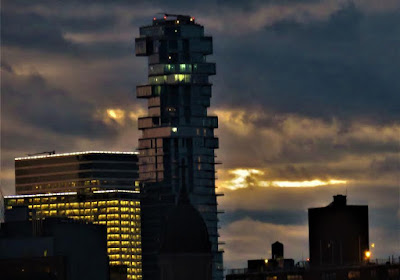 A view from the East Village perch of Bobby Williams... looking to the southwest toward the Jenga-like, 57-story residential building currently under construction at 56 Leonard St.
Posted by Grieve at 10:17 PM 8 comments:

Welcome to New York! Lookee at what you can't afford!

Can't say that I have to travel much via the Holland Tunnel...But I did the other day, returning from my favorite airport in Newark, the Newark International Airport...Fresh out of the tunnel in Manhattan, I spotted this billboard by the hole-in-the-ground gang at 56 Leonard. 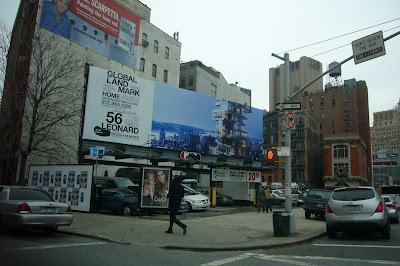 I'm just surprised the billboard doesn't include a New York City, Mayor Michael R. Bloomberg banner.
Posted by Grieve at 6:55 AM No comments:

Looking at a "stunning hi-def branding production" -- a video on YouTube!

Anish Kapoor's huge stainless steel balloon sculpture floats gently out of the Manhattan sky to land on-site at 56 Leonard Street, where it is compressed into final form under the descending weight of architects' Herzog & de Meuron's twisted-glass and steel 57-story hi-rise residential tower.

So opens directing and new media studio Tronic's stunning hi-def branding production, which was designed by partners Jessi Seppi and Vivian Rosenthal, themselves Columbia University trained architects, to conceptually mirror the architects' intent while providing the foundation for the luxury properties' marketing program. Music and sound design was provided by Nylon.

The 57-story condo coming to 56 Leonard 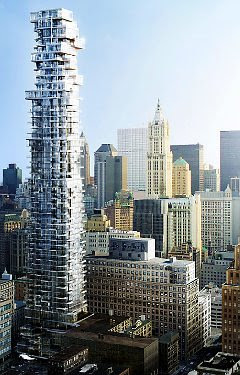 From the Daily News on 56 Leonard Street:

The Swiss architects of the iconic Bird's Nest stadium at the Beijing Olympics are bringing their innovative style to New York City with a translucent glass skyscraper designed to look like houses stacked in the sky.

Curbed has been following the story.

Anyway, this building won't look out of place at all! A fine addition to our city of glass.
Posted by Grieve at 11:09 AM 3 comments:

Email ThisBlogThis!Share to TwitterShare to FacebookShare to Pinterest
Labels: 56 Leonard Street, too many condos, too many high rises, Tribeca
Older Posts Home
Subscribe to: Posts (Atom)