"How to Survive a Plague" is one of the five films nominated for Best Documentary Feature in the 2013 Academy Awards.

"How to Survive a Plague" is the story of two coalitions — ACT UP and TAG (Treatment Action Group) — whose activism and innovation turned AIDS from a death sentence into a manageable condition. Despite having no scientific training, these self-made activists infiltrated the pharmaceutical industry and helped identify promising new drugs, moving them from experimental trials to patients in record time. With unfettered access to a treasure trove of never-before-seen archival footage from the 1980s and '90s, filmmaker David France puts the viewer smack in the middle of the controversial actions, the heated meetings, the heartbreaking failures, and the exultant breakthroughs of heroes in the making.

France is a longtime resident of East Seventh Street. He has been writing about AIDS since 1982, and as a journalist, his work has appeared in The New York Times, Newsweek, GQ, and New York magazine. 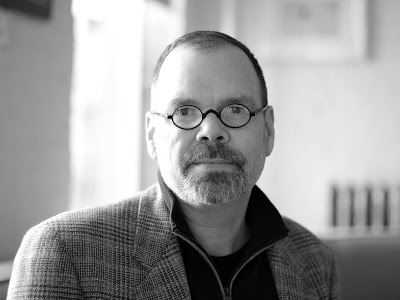 "How to Survive a Plague" marks his directorial debut. He's currently working on a book about the AIDS epidemic for publication later this year. In an interview published yesterday at Time magazine, he talks about what it was like to hear the news of the nomination:

It was thrilling. I guess probably everybody would say that, but for me the thrill was that we ran this massive outreach and education campaign around it. And all of this is an effort to give the film a life of its own and to establish it in the marketplace of ideas so that people will turn to it for this history. And an Oscar nomination gives it that much more standing and makes it more probable that it will reach wide audiences for a long time.

Here are some different ways to see the film, which is now on DVD.

Also, thanks to the commenter for pointing out this interview on The Brian Lehrer Show. And Claude Peck left the URL for his review in the Minneapolis Star-Tribune.

80-plus years of Best Pictures at Kim's

In case you haven't OD'd on Oscar-related what not ... Kim's on First Avenue has all the previous Best Picture recipients for sale ... (or at least they did...) 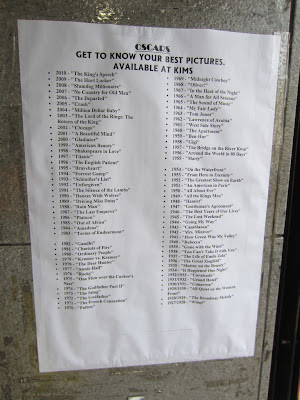 Also, as The Lo-Down noted, you can watch the ceremonies for free at the Sunshine on East Houston. Per the Sunshine Facebook page: "We're going to host that famous awards show (that we're not allowed to mention by name for legal reasons, no joke) live on our biggest screen. It's totally free and it's first come first served. The theater seats quite a few people so bring your friends!"

Meanwhile, we'll be busy watching the Best Picture from 1992: "Universal Soldier."
Posted by Grieve at 7:41 AM No comments: