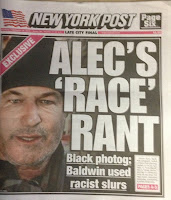 The Post has an "exclusive" today about an alleged run-in between Alec Baldwin and a Post reporter and photographer... among other things, he reportedly used a a racial epithet about the photographer, who is black, and said to the reporter "I want you to choke to death." (Baldwin's spokesperson called the racial accusations "completely false.")

Putting aside what may or may not have happened... all the reports say that this confrontation occurred "on an East Village street." It was on East 10th Street outside his apartment building at University Place, which The New York Times refers to as Greenwich Village.

You may now continue with your Presidents' Day.
Posted by Grieve at 11:26 AM 9 comments: