Basics Plus is closing on 3rd Avenue 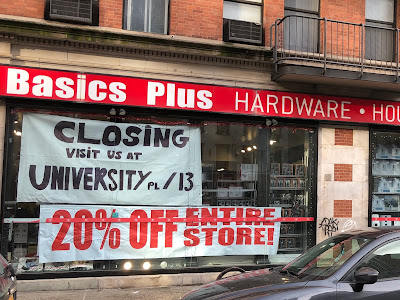 Housewares shop Basics Plus is closing at 91 Third Ave. and 12th Street. A store employee told EVG correspondent Steven that March April 29 is the last day.

The going-out-of-business signs in the front windows direct future Basics Plus shoppers to the location on University at 13th Street. (Also, everything in the store is 20 percent off, per the signage.)

Not sure at the moment why his outpost, which opened here in August 2014, is shutting down. It seems like a good location given the proximity to several dorms (NYU, New School and Cooper Union) as well as multiple apartment buildings. Rising rents? Amazon? Too many Basics Plus outposts?

In any event, I reached out the the Basics Plus HQ to learn more about this closure.

Basics Plus, with multiple NYC locations, took over the space last held by Surprise! Surprise!, which shuttered after 25 years in business in April 2014.

Previously on EV Grieve:
Surprise! Surprise! will close at the end of April (42 comments)

Basics Plus confirmed for former Surprise! Surprise! space on 3rd Avenue
Posted by Grieve at 4:30 AM 14 comments:

Basics Plus is now open on 3rd Avenue 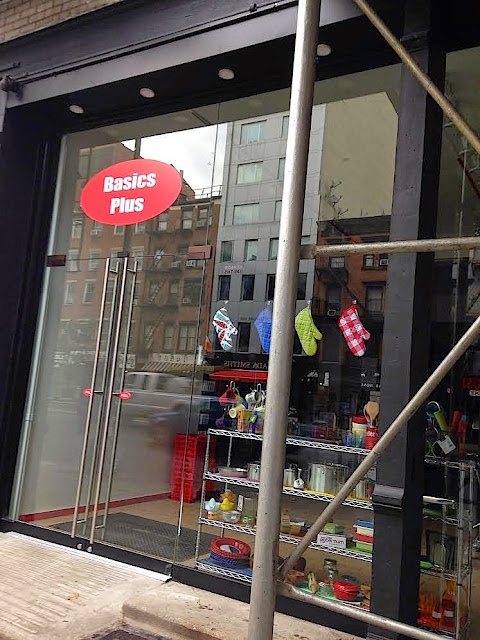 The windows at Basics Plus at 91 Third Avenue are filled with oven mitts, household cleaners and power drills!

The housewares store with several NYC locations opened Friday here on the northeast corner of 12th Street. They took over the space last held by Surprise! Surprise!, which closed after 25 years in business on April 27.

Previously on EV Grieve:
Surprise! Surprise! will close at the end of April (42 comments)