Some early thoughts on the CBGB movie 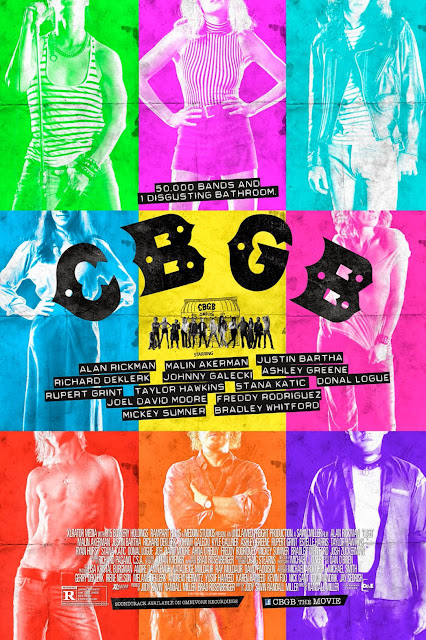 The "CBGB" biopic makes its U.S. premiere tonight at the Sunshine as part of the CBGB Music and Film Festival. (The movie opens Friday in theaters.)

So far, some of the reviews of the movie starring Alan Rickman as CBGB founder Hilly Kristal haven't been so kind, putting it mildly. (To date, there are four "rotten" reviews over at Rotten Tomatoes.)

At the Voice, Brian McManus turns in a review accompanied by the headline "The Year Punk Bored: CBGB Could've Been Good But..." He writes that the film is "a mostly turgid, boring-as-hell, campy slog that gets more wrong than right."

At the Daily News, veteran music writer Jim Farber tries to be diplomatic. He points out the movie's much-discussed historical inaccuracies, such as Patti Smith performing "Because the Night" at least three years before it was written.

The film is a poorly written, clumsily acted mess.

Yet, in the end, it did my heart good to see it. I thrilled to every fast reference to long-lost and beloved acts like the Mumps, Teenage Jesus and the Jerks, and the Tuff Darts. More, it was warming to see any depiction of the obliterated New York of old, no matter how vaguely rendered. If, in the end, the movie gets nowhere near its core mission of bringing back punk’s essential passion, it delivers its putrid outlines with loving accuracy.


The most savage review came last Monday via Marc Campbell, the vocalist for the Nails, in a post at Dangerous Minds titled "If You Thought CBGB's Bathrooms Were Full of Shit Check Out the Movie."

Among his many grenades:

• "Fortunately, I can’t imagine CBGB finding an audience willing to spend a dime on this glob of pustulating spit."

• "From a hectoring, shrewish Patti Smith ... to a pathetically sexless Iggy Pop or Lou Reed, looking like a cross between Eminem and the Pillsbury Doughboy, or the tight-ass actress playing Debbie Harry with absolutely no feel for the delightfully clunky, self-aware, sex-kitten charm of the Bowery’s platinum blondie, this movie manages to suck all of the rock ‘n’ roll magic out of every single performer it supposedly celebrates."

And here's a closing thought about trying to capture all this via a piece on the film in The New York Times yesterday:

"It's virtually impossible to capture a Hollywood version of punk," said Handsome Dick Manitoba, the frontman for the original punk band the Dictators and the owner of a punk bar, Manitoba’s, in the East Village who also works as a satellite-radio D.J. "The only way to do it is with a documentary."

Here is the CBGB movie trailer

The Hollywood Reporter had the exclusive first look today at the trailer for the CBGB biopic. After premiering at the CBGB Festival, the film opens Oct. 11 in New York, Los Angeles and other select cities. It was filmed in Savannah, Ga., on Broughton Street (on Paula Deen's block!) ... while the crew replicated the inside of the bar in Savannah's Meddin Studios, where all the interior shots took place...

Here is the CBGB movie soundtrack 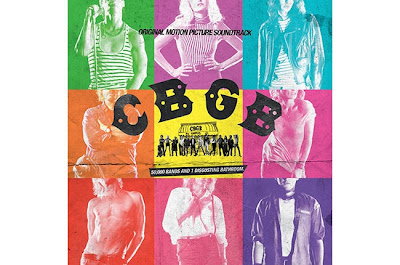 You may have seen this yesterday ... Omnivore Recordings is releasing the “CBGB: Original Motion Picture Soundtrack” on Oct. 8. (The first pressing is reportedly on translucent pink vinyl.)

And, via Billboard Magazine, here's the track listing:

As Billboard noted, after premiering at the CBGB Festival, the film opens Oct. 11 in New York, Los Angeles and other select cities.

The CBGB movie has a distributor, release date

XLrator Media will be distributing the CBGB biopic in the United States, according to The Hollywood Reporter.

The movie, which stars Alan Rickman as Hilly Kristal, will be released during the CBGB Musical Festival this October.

Said Barry Gordon, XLrator Media CEO, in a statement: "CBGB is the rare film that will resonate with teens, millennials and legacy fans alike. The whole family can jump in the mosh pit together for this one!"

Other titles from XLrator Media include: "Dragon Wasps" and "Age of the Dragons," billed as "a re-imagining of Herman Melville’s classic novel Moby Dick in which Captain Ahab searches for the White Dragon that slaughtered his family and left him scarred when he was young."
Posted by Grieve at 11:03 AM 3 comments:

Coming soon to a department store, movie theater and museum near you... 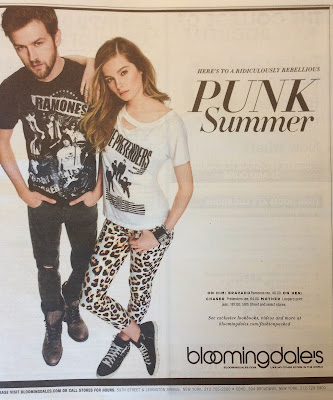 This Bloomingdale's ad appeared in the Post yesterday. According to the ad, we're in for a Punk Summer. Prepare now! His Ramones T-shirt is $48, her Pretenders T-shirt is $64. 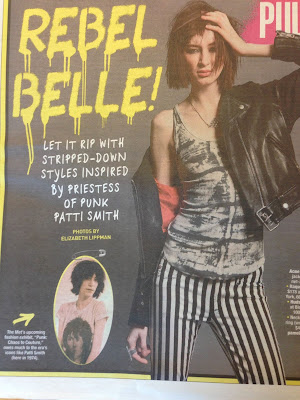 Also in the Post yesterday. A fashion spread in which you can "become a rebel belle with stripped-down styles inspired by priestess of punk, Patti Smith."

James Wolcott has an essay in the May Vanity Fair titled "Punk Is in the Air," a look at the new wave of nostalgia with the Richard Hell memoir, the upcoming CBGB biopic and the the Costume Institute's Punk: Chaos To Couture exhibit.

Here then, a few of his thoughts on the CBGB film, which he hasn't seen yet.

To those of us who were there, one of the anticipations of screening CBGB once it’s released from captivity is seeing not just how it simulates the squalor, congestion, snarling sound, and cove-like sanctuary of this landlocked submarine, but how it portrays the musicians, bartenders, waitresses, and regulars without whom it would have been just another hangout.

When filmmakers attempt a teeming mural like this, populated with recognizable figures, it’s easy to end up with a Mort Drucker–esque Mad-magazine spread with familiar faces packed like sardines and pressed against the glass, contorted and distorted.

On that topic, the CBGB Facebook page posted a few more stills from the film in recent weeks...

"Hilly... Playing chess with the bikers" 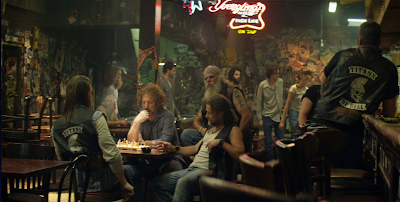 And... "Blondie and Iggy on stage... nice lipstick" 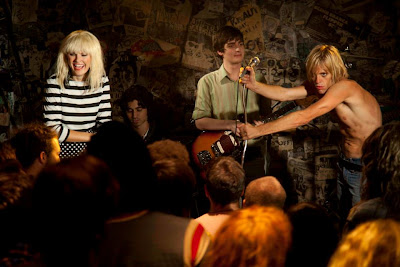 The press preview for the Costume Institute's Punk: Chaos To Couture exhibit was yesterday. Racked was there. One apparent highlight. A replica of the CBGB men's room. 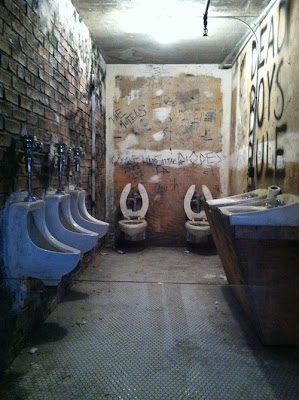 Here is the official poster for CBGB the Movie 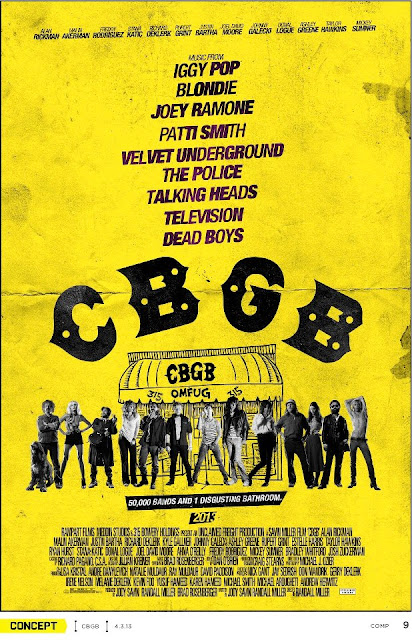 Here, via the CBGB Movie Facebook page, is the official poster... The Hollywood Reporter has exclusively been posting the new, uh, posters for the past week. There are an additional four posters featuring the characters who portray Joey Ramone, Debbie Harry, Patti Smith and Stiv Bators.

You can find all those via THR here, including this one of actress Malin Akerman as Debbie Harry... 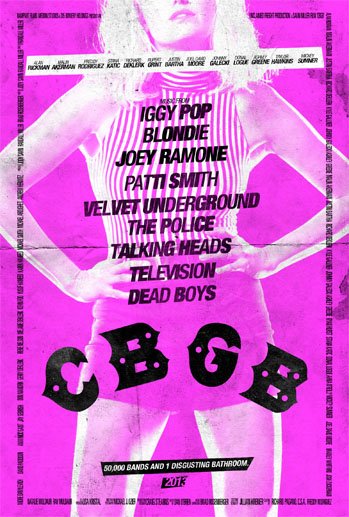 This one was just a teaser of sorts.
Posted by Grieve at 1:43 PM 12 comments: 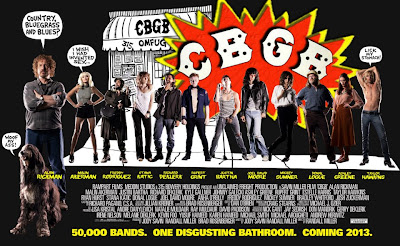 Via the CBGB movie Facebook page this afternoon... Early thoughts from Alex at Flaming Pablum: "Mark My Words... This movie is going to suck."

Previously.
Posted by Grieve at 5:55 AM No comments:

The Ramones and Television back on the Bowery, sort of

A reader asked if we had heard about a release date for "CBGB," the movie (biopic?) about Hilly Kristal and the rise of his club ... filmed last summer in Savannah, Ga., which subbed for the Bowery of the 1970s... crews replicated the inside of the bar in Savannah's Meddin Studios, where all the interior shots took place.

As far as we know, the film doesn't have a release date just yet for 2013.

Meanwhile, in looking at the production company's website, we did spot a few teaser stills from the film, including:

According to an article in Rolling Stone last summer, "To maintain authenticity throughout the film, [the filmmakers] exhaustively researched other CBGB regulars, and consulted frequently with Television's Tom Verlaine, the Voidoids' Richard Hell and Talking Heads drummer Chris Frantz." Cheetah Chrome of the Dead Boys also has a cameo in the movie as a cab driver who hates the punk scene.

So, any plans on seeing the movie?

Previously.
Posted by Grieve at 6:00 AM 7 comments:

Email ThisBlogThis!Share to TwitterShare to FacebookShare to Pinterest
Labels: CBGB movie, the Ramones 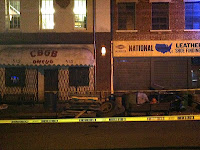 The Wall Street Journal checks in with a piece on the CBGB biopic, appropriately headlined "The Bowery Went Down to Georgia." (Heh — very bloggy!)

There's a recap of the movie news to date... the reporters also speak with some locals on the Bowery, like the fellow who books musical acts at the John Varvatos boutique. He hadn't heard about the movie. Across the street, a worker at Think Coffee said, "The fact that they're shooting in Georgia is indicative of how this neighborhood is changing. I don't even know where they'd have to shoot the film here to get the same feel."

[Image via Facebook]
Posted by Grieve at 2:21 PM No comments:

Georgia on my mind

Yesterday, we posted that photo of the CBGB exterior that crews for the CBGB movie recreated in Savannah, Ga. ...

Our friend Maura Johnston at the Voice had another shot of the exterior yesterday ... 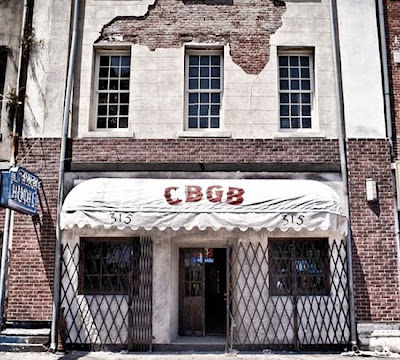 Meanwhile, via the Huffington Post, a shot of Alan Rickman as Hilly Kristal on the set... 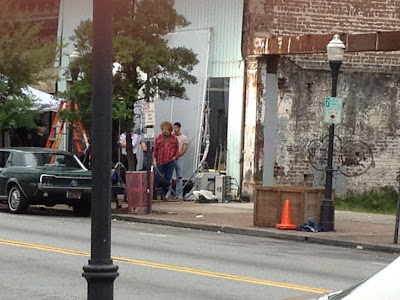 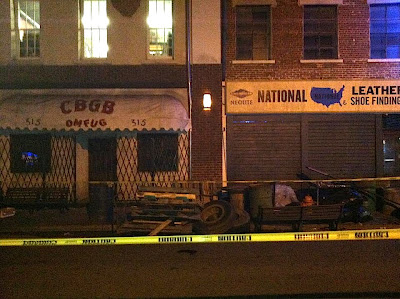 The CBGB biopic starring Alan Rickman as Hilly Kristal is filming in Savannah, Ga., both on Broughton Street (on Paula Deen's block!) where we think the bar's exterior above was created... and in a studio ... the crew replicated the inside of the bar in Savannah's Meddin Studios, where all the interior shots will take place...
Posted by Grieve at 8:04 AM 7 comments: