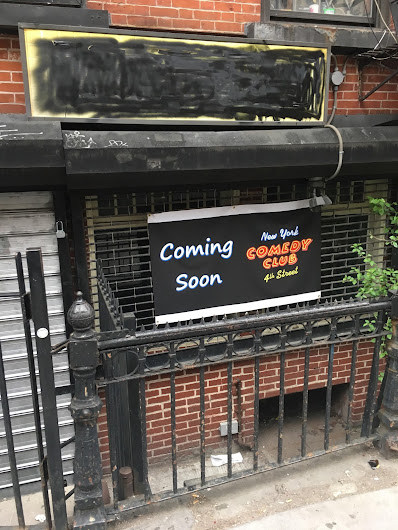 The coming soon signage is up on Fourth Street between Second Avenue and the Bowery for New York Comedy Club.

They are taking over the former home of EastVille Comedy Club, who moved out to Brooklyn last month.

This will be the second location for the New York Comedy Club, which opened in 1989 on 24th Street between Second Avenue and Third Avenue.

"We're very excited about being part of such a vibrant neighborhood full of all kinds of other arts and performance venues," Amy Hawthorne, the club's director of operations, told me via email.

As of now, the club is looking at a mid-July debut (though they may have a soft opening before then).

"We'll be renovating the space to be more in keeping with the look and character of our original Gramercy location — darker room, brick wall background for the stage, and an audio system custom designed for the space by our co-owner, Scott Lindner, who is also a professional audio engineer," she said.

Lindner and Emilio Savone bought the New York Comedy Club in 2014 after years of working in entertainment marketing and live comedy production.

You can find more background on New York Comedy Club here.
Posted by Grieve at 4:30 AM 1 comment: 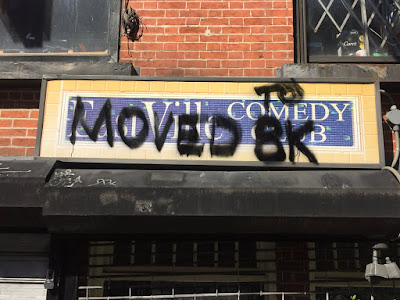 Here's one way to announce a move: Spray paint the message over your business sign. (Thanks to @EdenBrower for the above photo!)

That's the case here at the now-former EastVille Comedy Club on Fourth Street between Second Avenue and the Bowery ... the club has relocated to Brooklyn (by the Barclay's Center)... 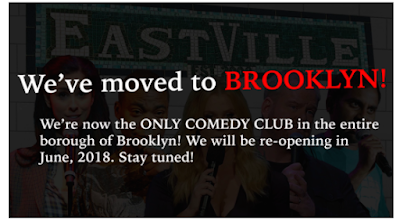 Last October, EastVille looked at taking part of the former Chase space at 20 Avenue A and Second Street. However, CB3 denied the application, citing, among other reasons, that this address was never licensed before ... and that it exists in a saturated zone.

Previously on EV Grieve:
EastVille Comedy Club space for rent on 4th Street
Posted by Grieve at 4:05 AM No comments: 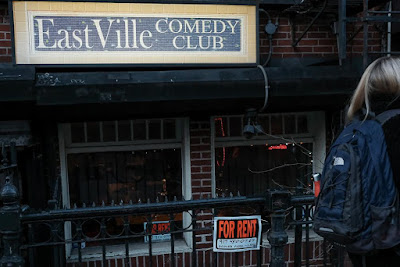 
Last October, EastVille looked at moving from Fourth Street into part of the former Chase space at 20 Avenue A and Second Street. However, CB3 denied the application, citing, among other reasons, that this address was never licensed before ... and that it exists in a saturated zone.
Posted by Grieve at 4:20 AM 3 comments: