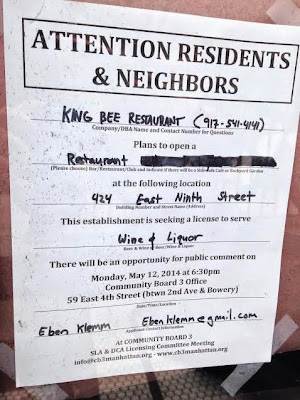 The other day, we wondered if 424 E. Ninth St., where Exchange Alley just closed, was a doomed location.

After all, Exchange Alley, which opened in August 2012, was the latest to give this space a try between Avenue A and First Avenue … where Olivia, Sintir and Zi' Pep all closed in fairly quick succession.

However, there's a already a new suitor lined up to try the space… a sign out front notes that a restaurant by the name of King Bee will appear before next month's CB3/SLA committee for a wine-liquor license... and the applicant is noted mixologist Eben Klemm, the former MIT molecular biologist who created the "aperitif-driven cocktail program" at Pearl & Ash on the Bowery, among may other bars and restaurants.
Posted by Grieve at 5:15 AM No comments: 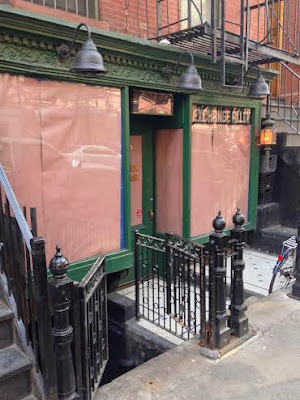 Last Monday, we noted that Exchange Alley on East Ninth Street had not been open for the past week or so. Everything was still in place inside. It looked like a working restaurant.

In recent days, we noticed that the space had been cleared out … and paper is now hanging in the front windows. The phone is no longer in service either.

Perhaps we can say that this is a jinxed/doomed location for a restaurant? Exchange Alley, which opened in August 2012, was the latest to give this space a try between Avenue A and First Avenue … where Olivia, Sintir and Zi' Pep all closed in fairly quick succession.

As Eater put it, "Exchange Alley opened to some decent buzz, but most of the big critics skipped the restaurant, and the hype quickly died down."

Exchange Alley has not been open lately 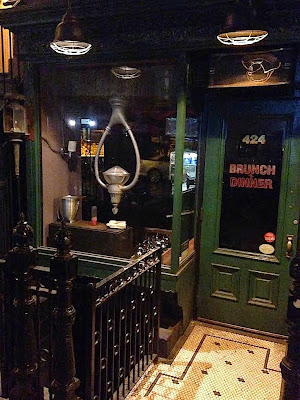 The New Orleans-themed Exchange Alley has not been open for the past week or so here at 424 E. Ninth St. between Avenue A and First Avenue.

There aren't any signs up to note a temporary closure … and there's nothing on their website or Facebook page to indicate anything is amiss. Calls to the restaurant go unanswered. However, the well-regarded restaurant is no longer listed on Open Table. We reached out to chef Paul Gerard, formerly of the SoHo House kitchen, to see what was happening here.

Exchange Alley, which opened in August 2012, was the latest to give this space a try … where Olivia, Sintir and Zi' Pep all closed in fairly quick succession ...

The restaurant enjoyed some high-profile press ahead of its opening, including a write-up on Vogue.com
Posted by Grieve at 5:01 AM 6 comments: