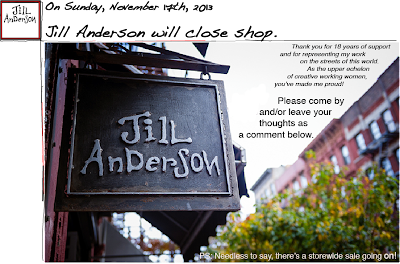 Several EVG readers passed along word that the Jill Anderson boutique at 331 E. Ninth St. is closing for good Sunday after 18 years in business. There isn't any reason given for the closure on the store's blog, which first announced the news.

So far, some 60 people have left comments about the closure on the Anderson store blog.

Jill’s loyal clientele are hardworking, intelligent, and fashionable women who know they can rely on her clothes to feel their best no matter the season or occasion. They also believe in thinking globally by buying their finery locally, and supporting independent, woman-owned businesses!

Most recently, Jill Anderson designed and created the dress for writer/director Debra Granik, whose film Winter’s Bone was nominated for four Academy Awards, including Best Picture and Best Adapted Screenplay.

Serena Solomon at DNAinfo spoke with Anderson about the closing.

Anderson said a combination of bad luck, high rent and the day-to-day difficulties of running a business recently made her decide to close the shop.

"This was like the heart here — this beautiful store," said Anderson, in between hugging a stream of well-wishing customers who came into the store as much to see the designer as to buy her wares. "I loved making people happy. I loved to sew."