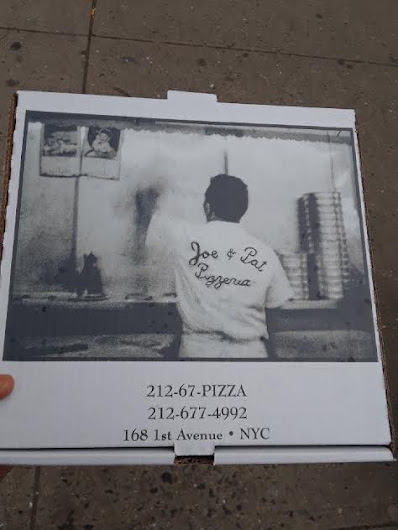 EVG regular Lola Sáenz stopped by for a pizza to go... 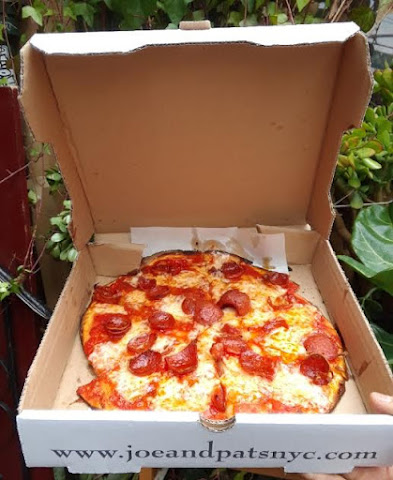 The hallmark of the pizza here is the cracker-thin crust with fresh-mozzarella. The food, from the Pappalardo family, has earned the restaurant cult status, and fans will be pleased to know that the Manhattan location is a straight-up duplicate of its older Staten Island sister.

You can find their menu here.

You can find more details on the pizzeria at Eater and Grub Street...
Posted by Grieve at 3:46 PM 11 comments:

Email ThisBlogThis!Share to TwitterShare to FacebookShare to Pinterest
Labels: Joe and Pat's, pizza 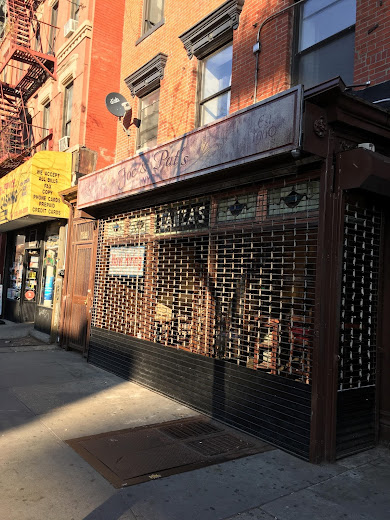 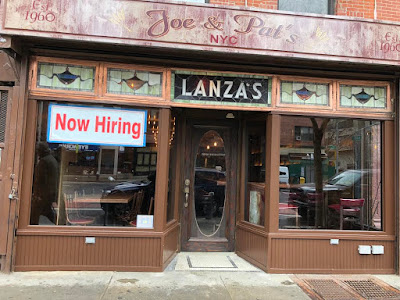 Reader report: Joe and Pat's will open in 3 weeks 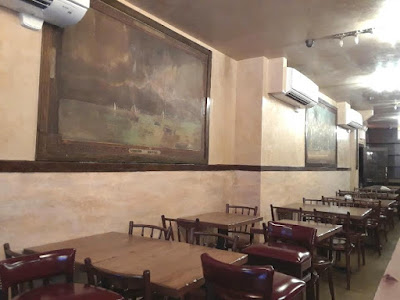 EVG regular Lola Sāenz shared the above photo from inside the incoming Joe and Pat's, the Staten Island-based pizzeria coming to 168 First Ave. between 10th Street and 11th Street.

One of the owners was there, and told Lola they'd be open in three weeks.

Previously
Posted by Grieve at 4:00 AM 4 comments:

Joe and Pat's signage arrives on 1st Avenue (above the Lanza's) 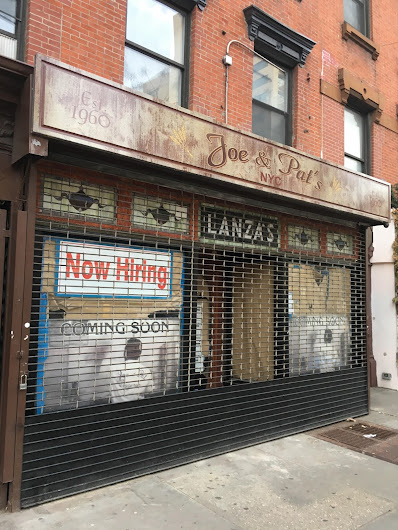 The sign for Lanza's, the previous tenant here, remains intact above the doorway. And Jeremiah Moss recently noted that Lanza's antique murals seem to have survived the gut renovation.

Speaking of renovations, it has seemingly taken awhile to get the space in Joe-and-Pat's shape. (The coming soon sign arrived in April 2017.)

This location of Joe and Pat's, whose first branch opened on Staten Island in 1960, will serve their signature thin-crust pies as well as a variety of pastas and salads. No word on when they may open.

A quick look at the incoming Joe and Pat's 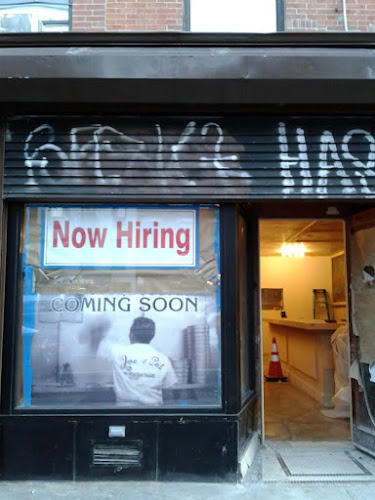 Work continues inside 168 First Ave. between 10th Street and 11th Street, where the Staten Island pizzeria Joe & Pat's is opening a location...

EVG regular Lola Sāenz shared these photos the other day showing how the interior is shaping up... 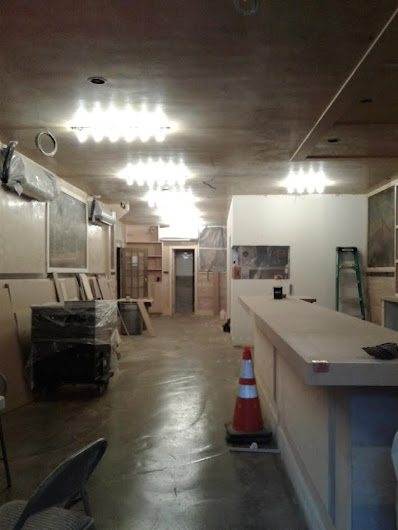 At the moment, it looks as if some of those antique murals from Lanza's, the previous tenant, will be part of the refurbished dining room... 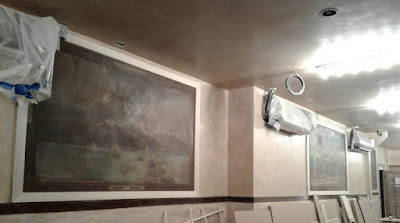 Find previous posts on this topic here.
Posted by Grieve at 4:01 AM No comments: 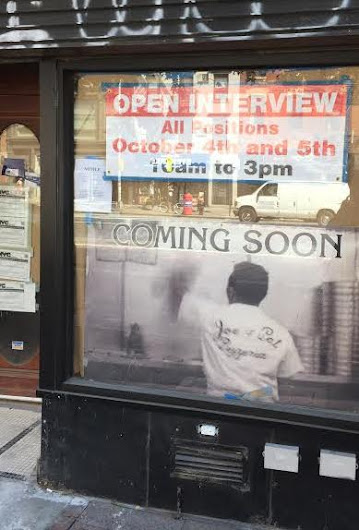 The Staten Island pizzeria, which got its start there in 1960, is expected to open later this fall, serving a variety of thin-crust pies and pastas.

As previously noted, Lanza's was the longtime tenant here at 168 First Ave. between 10th Street and 11th Street.

Find previous posts on this topic here.
Posted by Grieve at 4:20 AM No comments:

A few dining details about Joe and Pat's, the Staten Island pizzeria opening on 1st Avenue 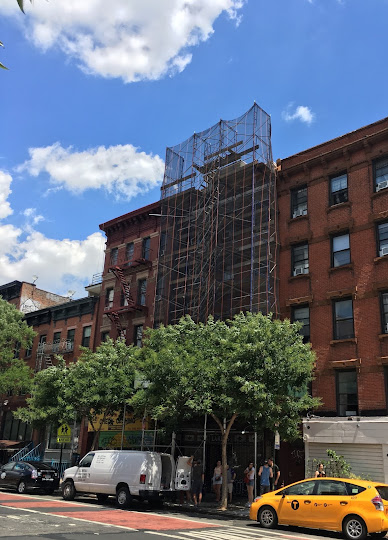 Work continues over at 168 First Avenue between 10th Street and 11th Street. (Given the scaffolding and construction netting, it appears that the entire building is getting a rehab.)

Joe and Pat's, the pizzeria and restaurant that debuted on Staten Island in 1960, is opening a location here, in the former longtime home of Lanza's.

The pizzeria's owners are on this month's CB3-SLA docket for a new liquor license for the space. The questionnaire on file ahead of that CB3-SLA meeting reveals a few more details about what diners can expect at the the East Village Joe and Pat's.

For starters, aside from pizza, Joe and Pat's will offer an "extensive menu" of Italian food. (Find their menu from the Victory Boulevard location here. Or check out their Instagram account here.)

The proposed hours of operation are 11 a.m. to 2 a.m. Sunday through Thursday; and until 4 a.m. on Friday and Saturday. The configuration shows seating for up to 43 diners, including use of the rear yard, where there are five tables. (It's not clear if this is an enclosed space. And the rear yard space won't be in use all hours.)

Earlier this year, New York magazine wrote that Joe & Pat’s offers the best of Staten Island pizza. "Its pies are the ultimate version of one of the borough’s dominant styles: thin-crust, vodka-sauced bar pie. Open since 1960, it doesn’t look like much, but the pizza is magnificent."