At Milk Bar, a new name for the Crack Pie 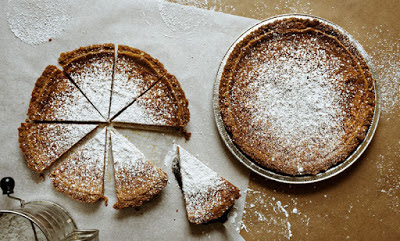 The East Village-based dessert spot Milk Bar has changed the name of its most-popular item.

We’ve made the decision to stop using the name Crack Pie. Starting today, it will be known as Milk Bar Pie. Below, I’m sharing the note I sent to the Milk Bar team. The fact of the matter is, anyone who visits this website or our stores or our social media is our family too, and we listen to what you have to say.

While change is never easy, we feel this is the right decision. Not everything will happen at once - the next few weeks and months will be a transition period. Your support means everything to us and if you have feelings or questions about it, we’re always here.

The name switcheroo comes less than a month after Boston Globe food scribe Devra First wrote a column titled "There’s nothing cute about crack pie" following the opening of a Milk Bar in Cambridge, Mass.

As she wrote about the tone-deaf name:

Chris Crowley at Grub Street made a similar case back in December about the use of "crack" to describe foods.

Previously on EV Grieve:
Food for thought: Milk Bar's Crack Pie is not a cute name, critic says
Posted by Grieve at 4:00 AM 7 comments: 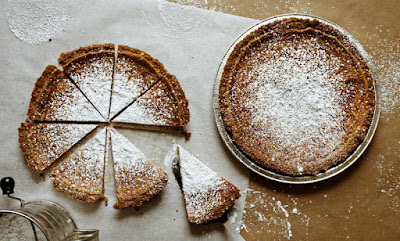 Milk Bar, a spinoff of David Chang’s Momofuku restaurants, debuted in the East Village in 2008.

And of late, celebrity chef Christina Tosi's dessert spot has been expanding to other cities.

Devra First, the Boston Globe food writer and restaurant critic, checks in on the location that opened last month in Cambridge, Mass.

Now the country is in the grips of an opioid crisis, and a double standard. This addiction affects white communities as well — 78 percent of those who died from an opioid overdose in 2017 were white, according to the Henry J. Kaiser Family Foundation — and our cultural response to it has been very different, with dialogue often centered on treatment rather than incarceration.

Regardless, here we are. Americans are now more likely to die of an opioid overdose than in a motor vehicle crash, according to a report from the National Safety Council. A bakery would never try to market something called Fentanyl Cake, and the name Crack Pie feels offensively tone deaf.

In other words, no squealing or woo-wooing 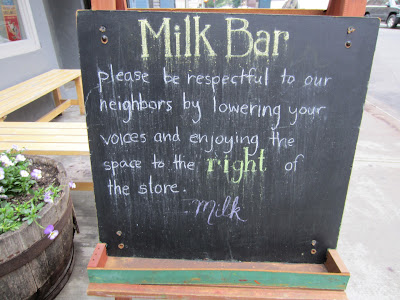 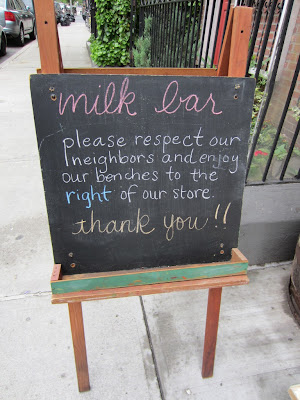 Momofuku Milk Bar moved across 13th Street and opened up a new shop at the end of April.

Given the popularity of anything with "Momofuku" in the title... Milk Bar management reminds patrons to use the benches in front of their store... 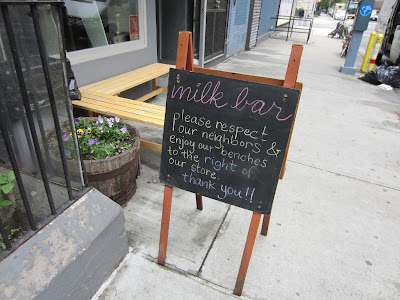 ... and not congregate on the residential steps elsewhere on the street... 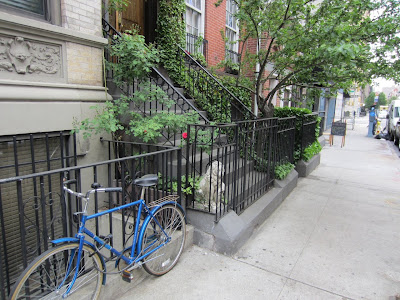 As Eater has reported, Momofuku Milk Bar applied for a liquor license at 251 E. 13th St. across the street from the current Milk Bar location. Per Eater: "The folks at Momo Milk are considering taking up the space, for an expansion or to move the operation." 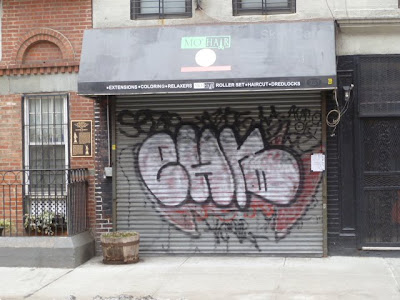 The CB3/SLA committed approved an MBII license in February. "When the committee questioned the need for a bakery to have a full liquor license, representatives eloquently spoke out about their need being mainly for baking purposes, and for a boozy milkshake. They would simply serve two types of beer for patrons who did not wish to have dessert," Eater reported.

So apparently the MB11 team is moving forward with plans to expand. On Wednesday, workers arrived and removed the old hair-salon canopy from the 251 storefront. 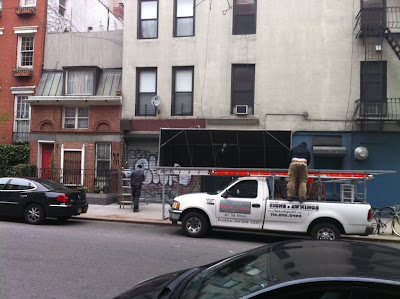 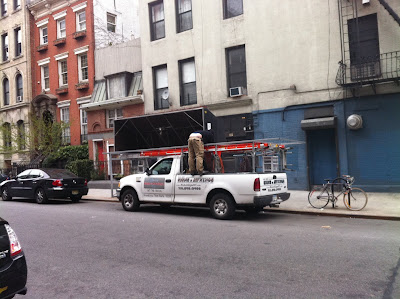 The DOB issued work permits for "replacement of storefront" last week.
Posted by Grieve at 6:36 AM 1 comment: