City doesn't give a shit about these historic East Village townhouses 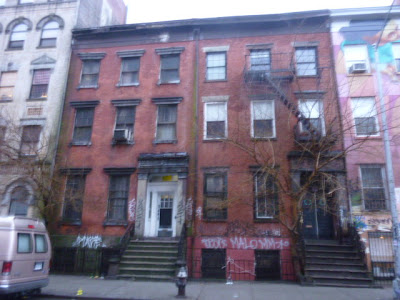 On Tuesday, the Greenwich Village Society for Historic Preservation (GVSHP) and other groups... not to mention various politicos ... rallied to help save the historic townhouses at 326 and 328 E. Fourth St. The GVSHP doesn't have good news to report: 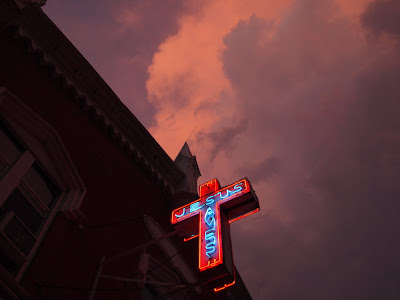 As the paper reported, LPC Chairman Robert Tierney said the buildings tell stories of the immigrant life in New York’s past. “These buildings collectively speak to many aspects of the immigrant experience in the East Village and on the Lower East Side in the 19th and early 20th centuries,” he said.

• Loew’s Canal Street Theatre at 31 Canal St. (The Lo-Down has more on this.)

• The Eleventh Street Methodist Episcopal Chapel (above) on 11th Street between Avenues A and B that now houses the Father’s Heart Ministry Center. (Read about the church's history here.)
Posted by Grieve at 9:42 PM 3 comments:

Do you mind if we dance with your dates?

From the Times today: the fourth and final article in a series examining the workings of New York City’s Landmarks Preservation Commission. Today's title: Preservation and Development, Engaged in a Delicate Dance

[S]ome preservationists and politicians assert that, under a mayoral administration that has emphasized new construction — from behemoth stadiums to architecturally bold condo towers — big developers have too often been allowed to lead on the dance floor. Some accuse the landmarks commission, charged with guarding the city’s architectural heritage, of backing off too readily when important developers’ interests are at stake.

Posted by Grieve at 6:35 AM No comments: 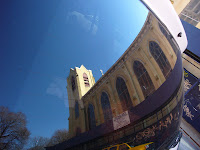 Previous Landmark Commission articles here.
Posted by Grieve at 6:28 AM No comments:

Julia Vitullo-Martin, a senior fellow at the Manhattan Institute, has an op-ed in the Post today on why it's time to save the city's imperiled landmarks:

The pause in New York City's building boom may have one side benefit: It gives everyone a chance to think. As projects skid to a halt and buildings get stopped in mid-construction, developers - and their neighbors -- have an opportunity to reassess their plans and consider different options for the future. Can that gorgeous but crumbling church on the corner be saved with neighborhood support? Is an old industrial warehouse a candidate for rehabilitation rather than demolition? Could a clever architect renovate that empty commercial skyscraper for residential? This is the time to think about the importance of old buildings in New York's urban fabric -- and how to preserve those worth keeping.

The Post also offers up a listicle of the 10 endangered buildings in the city worth saving, such as the Corn Exchange Bank in Harlem (pictured above) on the northwest corner of 125th Street and Park Avenue. You can view the slideshow here.
Posted by Grieve at 10:29 AM No comments:

A rush to destroy history 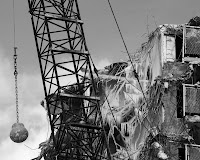 The Times continues to take it to the Landmarks Preservation Commission:

The strategy has become wearyingly familiar to preservationists. A property owner ... is notified by the landmarks commission that its building or the neighborhood is being considered for landmark status. The owner then rushes to obtain a demolition or stripping permit from the city’s Department of Buildings so that notable qualities can be removed, rendering the structure unworthy of protection.

The number of pre-emptive demolitions across the city may be relatively small, but preservationists say the phenomenon is only one sign of problems with the city’s mechanism for protecting historic buildings. “This administration is so excited about the new that it overlooks its obligation to protect the old,” said Anthony C. Wood, author of “Preserving New York: Winning the Right to Protect a City’s Landmarks.”

Previously on EV Grieve:
A Landmark article
Posted by Grieve at 8:57 AM No comments:

A six-month examination of the commission’s operations by The New York Times reveals an overtaxed agency that has taken years to act on some proposed designations, even as soaring development pressures put historic buildings at risk. Its decision-making is often opaque, and its record-keeping on landmark-designation requests is so spotty that staff members are uncertain how many it rejects in a given year.