RIP Ohio Theatre?: "It's not the first cultural institution to succumb to real-estate pressures" 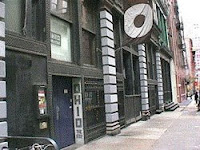 Alexis Soloski reports in the Voice that the Ohio Theatre will likely close in the new year. The former textile factory at 66 Wooster St. is being sold. According to the Voice: "[M]aintenance expenses and preservation of the façade required by the city created an untenable financial burden," which is why the previous owners reluctantly sold the space.

Said Robert Lyons, artistic director of Soho Think Tank, a nonprofit group that administers the Ohio: "It's not the first cultural institution to succumb to real-estate pressures," he says. "Soon we're going to have a city without any cool theater spaces.... [New York needs] to protect our cultural jewels like this."

The reaction from John Del Signore at Gothamist: "Argh, must everything that makes life worth tolerating in New York City be systematically eradicated?"

(Photo via Theater Mania)
Posted by Grieve at 6:23 AM No comments: