UPDATED: Pinky's Space is closed for now 2 weeks after the city removes its curbside structure on 1st Street 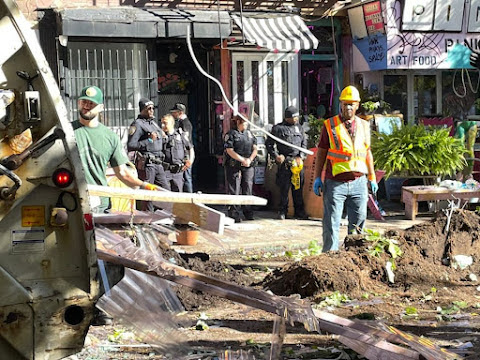 Photo from Oct. 27 by Lori E. Seid
Updated: Owners Wesely and Mimi reached out to tell us that they have NOT closed for good, despite the published report. They said they are "currently in a rebuilding phase and will not be closing permanently."
-----
Pinky's Space, the cafe-art gallery at 70 E. First St. has closed two weeks after the city removed its curbside dining structure. And now, the owners are planning to sue the city for property damage and loss of business, Jennifer Gould at the Post reports.
On Oct. 27, the city leveled the 50-foot-long outdoor structure, which had morphed into an assemblage of paintings, furniture and plants — topped off by a chandelier and disco ball here between First Avenue and Second Avenue. Co-owner Mimi Blitz estimated she spent $50,000 on the structure.
Per the Post:

"We are still devastated — we haven’t been able to fully reopen and we have to restructure our business model because 90% of our business was from roadway dining," said Blitz...
"We had a living, breathing business here," Blitz added. "We made sure it looked good and was up to code."

A DOT spokesperson told the Post that Pinky's Space had received three non-compliance warnings since August.

"We had no indication they were taking the structure down, taking my whole livelihood down," Blitz said. "Some of the DOT workers were laughing at us. They took the lights, every piece of wood, and the astroturf."

Pinky's Space first opened in 2018 as a quick-serve cafe offering a variety of sandwiches served on biscuits.
Posted by Grieve at 5:33 AM 13 comments: 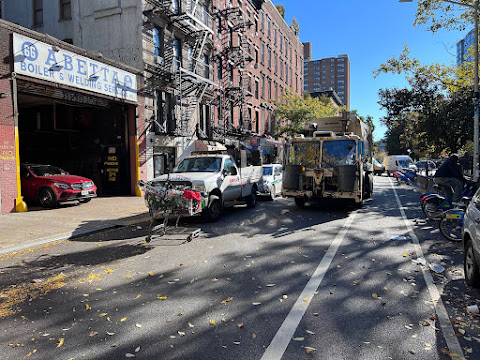 Yesterday morning, members from the DOT and Department of Sanitation — under watch of the NYPD — shut down First Street at First Avenue to remove the outdoor structure at Pinky's Space, a restaurant-art space at 70 E. First St. (The first two photos are from Luke Mathews)... 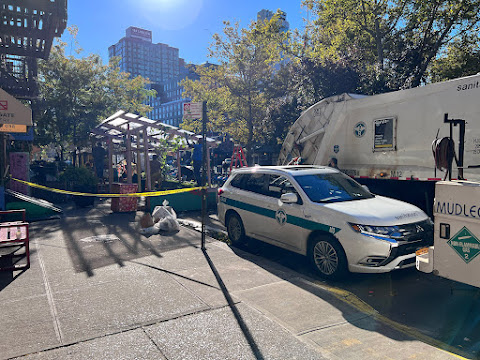 ... the decor of the outdoor space continued to evolve through the months... an assemblage of paintings, furniture, plants ... not to mention a chandelier and disco ball.
In an Instagram post after the removal, Pinky's wrote: "D.O.T. decided to try and destroy our business today with no warning. #just not right!!!"
It's not immediately known why the city removed this structure, which was still in use.
Per the Post last night:

The city had inspected the 30-foot shed on East First Street and First Avenue earlier this month — but said nothing about plans to tear it down...
They only told her to get rid of a vending machine that “wasn’t food-related” and to pick up a trash can encroached 6 feet into the amenity zone between the shed and the sidewalk, [co-owner Mimi] Blitz said. 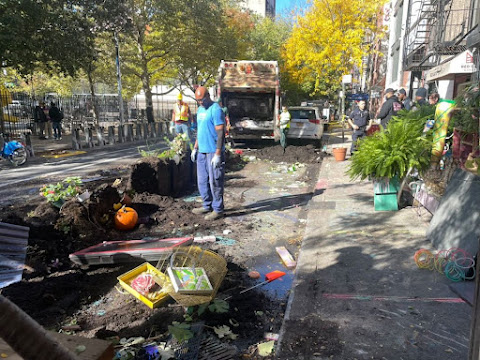 ... soon after, cars were parked where the structure stood... 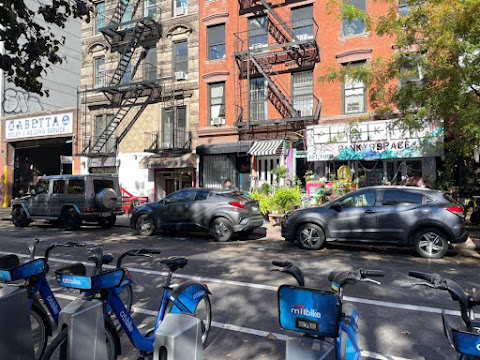 In August, the city started removing dining sheds from outside closed establishments.
The city said this about curbside structures that are still in use:

If the city did remove this for violations, then it didn't follow its stated policy of removing and storing... as the contents and the structure were tossed into the back of a garbage truck and crushed.
Posted by Grieve at 6:48 AM 24 comments: 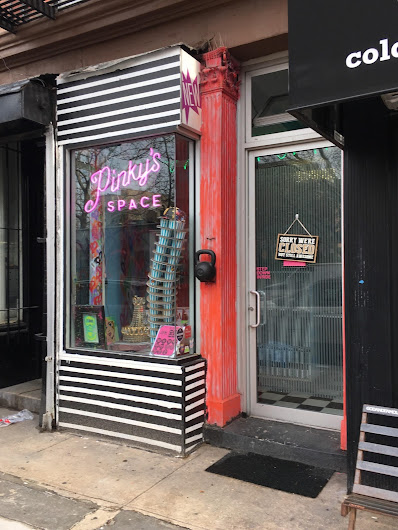 An EVG reader, who says he's a fan of the new Pinky's Space on First Street, was disappointed to find the to-go shop closed in recent weeks.

There isn't any mention of a temporary closure on the Pinky's website or social media channels.

According to public records, the Health Department closed Pinky's following an inspection on Feb. 13. In total, there are 121 violation points ... the most serious, per the DOH website: "Food from unapproved or unknown source or home canned. Reduced oxygen packaged (ROP) fish not frozen before processing; or ROP foods prepared on premises transported to another site."

According to Pinky's crowdfunding campaign:

Pinky's wants to keep life simple for everyone. Food operations will be streamlined by utilizing a central kitchen to prepare and cook all food with daily deliveries to each location. A limited menu will also keep the overall system simple and efficient for both customers and personnel. Each store will be simplistic and require minimal investment. They will require a steam table, refrigerator, sink, and countertop.

Looks as if there are a few issues to address to make this concept work within the Health Department's guidelines. (Other violations included "HACCP plan not approved or approved HACCP plan not maintained on premises.")

And the reader likely didn't know about the violations given that the DOH's yellow "closed" sticker was covered up on the front door... 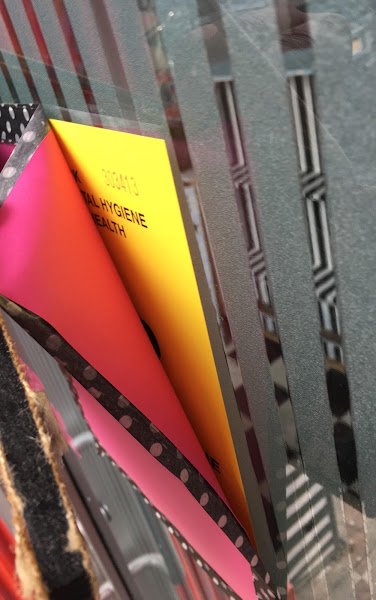 Pinky's opened in early January, receiving coverage on UrbanDaddy and ABC 7.
Posted by Grieve at 4:00 AM 2 comments: 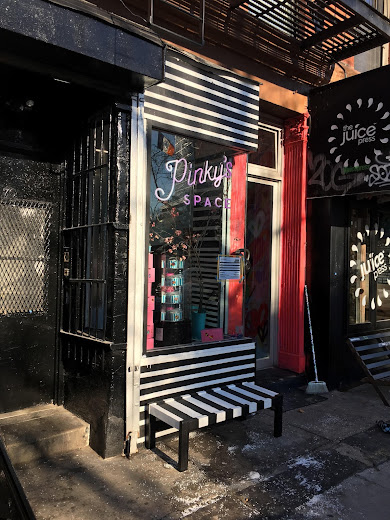 Pinky's Space is now up and running at 70 E. First St. just west of First Avenue.

Pinky's is serving a variety of quick-serve sandwiches on biscuits... as you can see from the menu on Pinky's website... 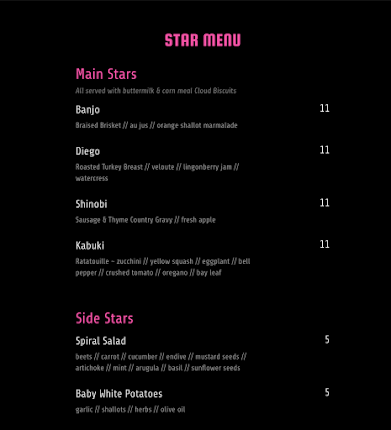 The to-go restaurant's Instagram account describes this as "French Southern fine dining cuisine out of the box and out of this world."

As previously noted, the Pinky's team is Wesley Wobles, a personal chef and cookbook author, and Mimi Blitz, who spent nearly two decades working for her mother's catering company and bakery in New Orleans. 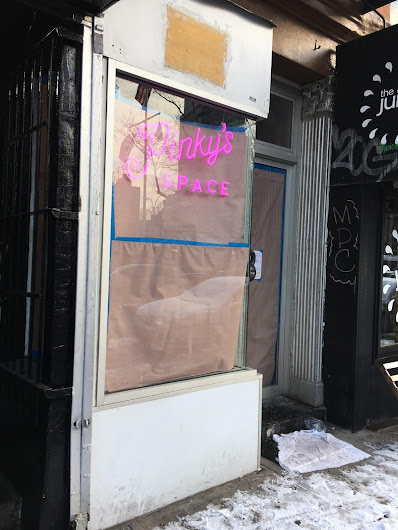 The Pinky's Space neon is up at 70 E. First St. just west of First Avenue... this will be the first location for Pinky's, which has ambitious plans to open multiple outlets near commuter hubs (here being across the street from the F stop).

Here are details from a crowdfunding campaign for the business:

The Pinky's team is Wesley Wobles, a personal chef and cookbook author, and Mimi Blitz, who spent nearly two decades working for her mother's catering company and bakery in New Orleans.

Pinky's has a website here. No word on an opening date.

The space previously (and briefly) served as a gym for Marcus Antebi, the Juice Press founder-CEO who opened his first store next door in April 2010.
Posted by Grieve at 4:05 AM 6 comments: