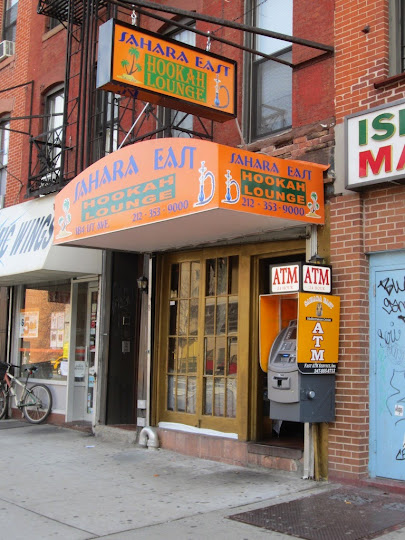 The city's hookah bars have been allowed to operate since the 2002 smoking ban as long as the shisha they sell contains only fruit, herbs and sweetening agents such as molasses.

However, according to a report in the Los Angeles Times, 13 hookah bars, including the 25-year-old Sahara East on First Avenue near East 11th Street, are in danger of closing after a city investigation found the shisha they served contained tobacco.

In addition, the article notes that the city completed the sting operation with the help of NYU undergrads. (The city also wanted to see if the establishments were selling the shisha to patrons under the legal age of 21.)

Mahmoud Gamaa, the owner of Sahara East, said he has been in business for 25 years, making him one of the first to introduce hookah bars to New York. Originally from Cairo, Gamaa said Sahara East, also a restaurant, is a place where people come to relax. "We're about hospitality, cleansing and being with friends," he said.

"These 13 hookah bars are knowingly flouting the law by serving tobacco-based shisha," Health Commissioner Mary Bassett said in a statement. "We will not tolerate this willful disregard of New York City's smoke-free air laws and have already taken steps to revoke the permits of these establishments."

Diana Silver, an associate professor of public health at New York University, said she arranged for six of her students to go undercover in the hookah sting after having worked with the health department on studies. She said the students were excited to do field work and would be giving depositions to be included in legal proceedings.

"They learned it's one thing to pass or imagine a law, but compliance and enforcement are complicated," she said.

When asked about the city's allegations that his shisha was found to contain tobacco, "Gamaa indicated that if so, it was unwittingly. He said he purchases only nicotine-free shisha from a distributor."

Read the whole article here.
Posted by Grieve at 7:54 AM 40 comments:

Sahara East is back open 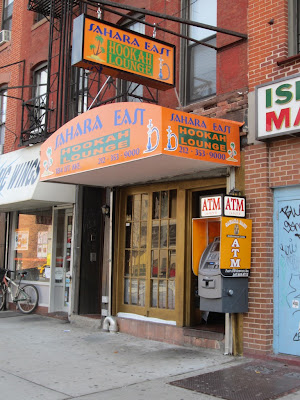 As we pointed out last Wednesday, the state closed down Sahara East on First Avenue for "nonpayment of taxes."

EV Grieve correspondent blue glass noted that they were able to reopen again this past weekend.
Posted by Grieve at 6:25 AM 1 comment:

Email ThisBlogThis!Share to TwitterShare to FacebookShare to Pinterest
Labels: A, Sahara East 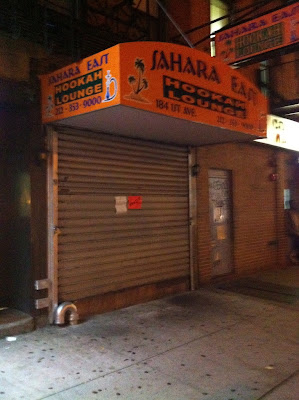 On First Avenue near 11th Street... for nonpayment of taxes, per the paperwork the state left behind on the gate... 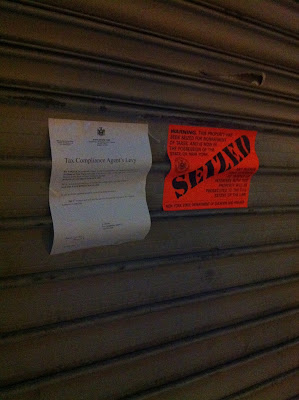