The Daily Mail has the story...about a new film called Who Killed Nancy? So, maybe Sid didn't actually kill Nancy some 30 years ago at the Hotel Chelsea...To the article!

Its makers claim to have uncovered evidence which reveals that a series of police blunders and apathy by detectives led the authorities wrongly to pin the blame on the star.

In fact, the film contests, medical tests carried out on Vicious at the time of his arrest showed the musician would have been incapable of the attack, because he was out cold at the time after taking so much of a powerful sedative that it would have killed all but the most hard-bitten drug users.

Instead, the film Who Killed Nancy? asserts for the first time that 20-year-old Spungen, the daughter of a wealthy middle-class Philadelphia family, was killed by another resident at the hotel - a shadowy British man named Michael, who spent that last fatal night in the room with the couple.

As the murderer robbed and killed Spungen for the huge stash of cash they kept there, Vicious, it is claimed, slept through the attack, only waking to find his lover's dead body in the morning.

The documentary's British director, Alan G. Parker, who has spent 24 years investigating the life and death of the star and has written a series of well-received books on the subject, tracked down more than 180 witnesses and unearthed previously unseen police reports.

He also spoke to several witnesses who are adamant that Vicious was innocent. Crucially, Parker says police found the fingerprints of six people who had been in the couple's room at New York's rundown Chelsea Hotel in the early hours, but none was ever interviewed. 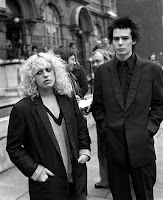 New York magazine has this feature this week:

The Day Punk Died
Thirty years ago this month, the death of Nancy (of Sid &) effectively ended New York’s early punk scene. It’s been easy to hate her since — maybe too easy

In the article, Karen Schoemer speaks with Legs McNeil, among others. She interviews him at the Yaffa Cafe. I love how the article ends:

Here's the Sid and Nancy heroin interview from the punk documentary D.O.A.