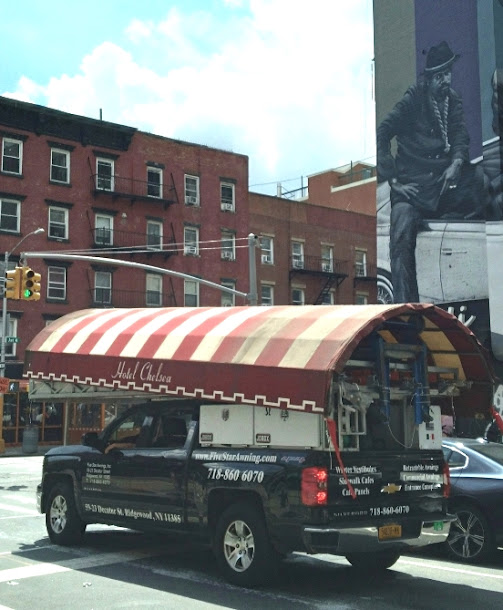 Photo by Lola Sáenz
The iconic Hotel Chelsea awning made an appearance on 12th Street and Avenue A today... on the back of a truck for Five Start Awning in Ridgewood...
Not sure if it's coming back. The Hotel Chelsea reopened in early summer after a decade of renovations.
P.S.
Did anyone watch the documentary "Dreaming Walls: Inside the Chelsea Hotel"????
Posted by Grieve at 12:30 PM 2 comments: 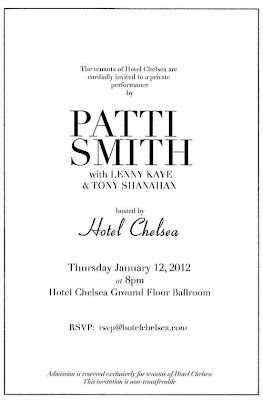 Patti Smith, of course, was one of the many famous residents at Stanley Bard's Hotel Chelsea through the years, living with Robert Mapplethorpe in the early 1970s, and returning later in the 1990s as well.

The Hotel Chelsea blog today posted — with "great sadness" — the above invitation ... Per the post:

The blog notes that Chetrit is currently trying to evict some 30 Hotel residents.

The Hotel Chelsea Blog is calling on her to cancel the event.

So many developments on this. She did perform for the new developers taking over the Hotel on Wednesday night, but canceled the show for residents on Thursday night.

Despite her insistence that she is not being remunerated for her involvement, we’re hard pressed to understand Smith’s motives. The resident we spoke to, who also happens to live on the same floor as Patti Smith’s old room (204, if you’re wondering), offered a theory: "Her room has remained completely intact, as a shrine to her career, while all the other rooms have been demolished."

"The Chelsea Girls" this weekend.
Posted by Grieve at 5:00 PM No comments:

The Daily Mail has the story...about a new film called Who Killed Nancy? So, maybe Sid didn't actually kill Nancy some 30 years ago at the Hotel Chelsea...To the article!

Its makers claim to have uncovered evidence which reveals that a series of police blunders and apathy by detectives led the authorities wrongly to pin the blame on the star.

In fact, the film contests, medical tests carried out on Vicious at the time of his arrest showed the musician would have been incapable of the attack, because he was out cold at the time after taking so much of a powerful sedative that it would have killed all but the most hard-bitten drug users.

Instead, the film Who Killed Nancy? asserts for the first time that 20-year-old Spungen, the daughter of a wealthy middle-class Philadelphia family, was killed by another resident at the hotel - a shadowy British man named Michael, who spent that last fatal night in the room with the couple.

As the murderer robbed and killed Spungen for the huge stash of cash they kept there, Vicious, it is claimed, slept through the attack, only waking to find his lover's dead body in the morning.

The documentary's British director, Alan G. Parker, who has spent 24 years investigating the life and death of the star and has written a series of well-received books on the subject, tracked down more than 180 witnesses and unearthed previously unseen police reports.

He also spoke to several witnesses who are adamant that Vicious was innocent. Crucially, Parker says police found the fingerprints of six people who had been in the couple's room at New York's rundown Chelsea Hotel in the early hours, but none was ever interviewed.

“The hotel guests also used to be culturally hip people. Now we get Mom and Dad from Cedar Rapids. It’s like living at Motel 6.” 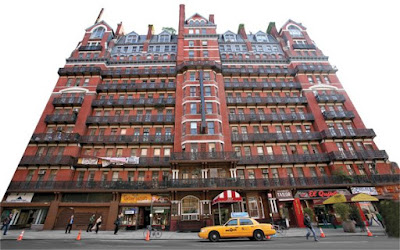 “It’s chaos here,” says one resident....many tenants haven’t paid rent (because there’s no one around to pay it to), and there’s been no super on duty for repairs. Tenants also say they are worried that, at some point, their rents will double. While the building is rent stabilized, the apartments aren’t registered with the city, and a lot of the leases aren’t on the books.