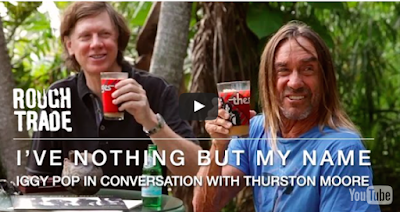 Oh, because we're reading the Kim Gordon memoir at the moment. Sonic Youth and "Mary-Christ" from 1990's "Goo."
Posted by Grieve at 5:00 PM 2 comments:

Thurston Moore has a new record (The Best Day) out today (Pitchfork says that it has "a distinctly Sonic Youth-ian discord."). You can check out the track "Speak to the Wild" above" …

Meanwhile, in New York magazine, Moore does the interview while shopping at Mast, walking on Avenue A and sitting in Tompkins Square Park. He reminiscences, but nothing too dramatic.

We walk by the Pyramid Club, one of the few holdouts from those days. “There was a nighttime collaboration between us and the drag queens who ruled that place,” he remembers. “They thought we were perfectly absurd. They would introduce the bands—the Swans, Sonic Youth—and make fun of us.” 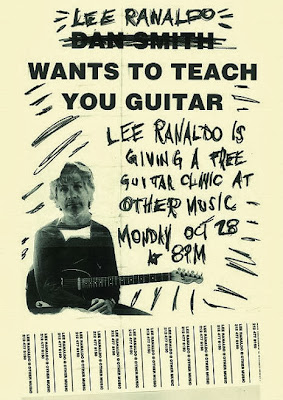 Lee Ranaldo, the prolific artist-writer-musician best known as the guitarist for Sonic Youth, is appearing tonight at Other Music...

That's right, Lee Ranaldo's going to be taking time out of his busy tour schedule supporting his new album, Last Night on Earth, to stop by Other Music on Monday evening, October 28, to host his first ever Guitar Clinic. Not only will there be a discussion and demonstration from this iconic axe man, but you'll also walk out with a signed poster!

He also has a new album out with Lee Ranaldo and the Dust. Meanwhile, here's something off his "Between The Times and The Tides" record from last year...

H/T Dangerous Minds
Posted by Grieve at 11:30 AM 5 comments:

Email ThisBlogThis!Share to TwitterShare to FacebookShare to Pinterest
Labels: Other Music, Sonic Youth

It was all whirlwind

The headline in the post above this one was in reference to "1991, the Year Punk Broke," the documentary that followed Sonic Youth, Nirvana, the Ramones and others on their European summer tour — during the summer of 1991.

The film came out in 1992, and I haven't seen it in about, oh, 19 years. I started watching it again recently, though I didn't finish just yet ... Instant reaction! Surprisingly timeless. And Thurston Moore always looks as if he's 18 or 19...

Posted by Grieve at 6:39 AM No comments:

Into the Death Valley

Posts that I never got around to posting in 2009: Notes that we found on the sidewalk 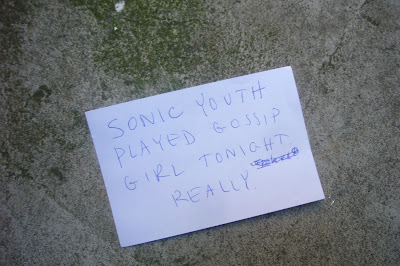 Somewhere on East Ninth Street.
Posted by Grieve at 6:38 AM 2 comments:

One way of dealing with roof-party snobs, courtesy of Sonic Youth

Thanks to This Ain't the Summer of Love for alerting us to the new Sonic Youth single/video.
Posted by Grieve at 6:46 AM No comments: 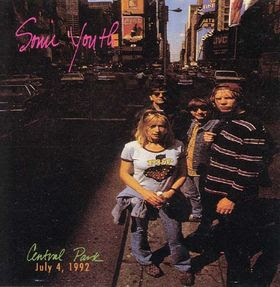 On July 4, 1992, I saw Sonic Youth at SummerStage in Central Park. Sun Ra and his Arkestra opened. I remember SY being as frenzied as I'd ever seen them as they played a Dirty-heavy set. (The record was just about to be released.) I don't remember much else, except that I loved every minute of the afternoon. (No need for all the details!)

There is a bootleg release of the show with:

I couldn't find any video from this 1992 Central Park show. But I did come across Sonic Youth playing "Kool Thing" in Hultsfeld, Sweden, on June 14, 1992 (Close enough!):

By the way, as you may know, Sonic Youth plays later today with the Feelies at Battery Park.

Updated: This week's issue of Time Out New York featured the following line prominently displayed on its cover: 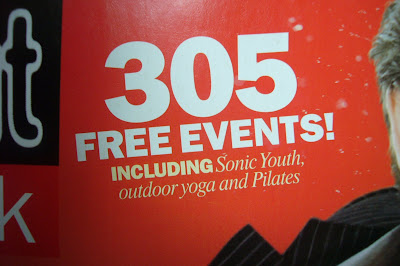 Yes, Sonic Youth was a free event. But you needed to get your tickets in advance. Inside the same issue, you'll see in two places that, although it was free, you weren't getting into the show. SOLD OUT. 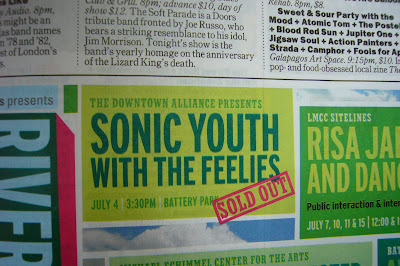 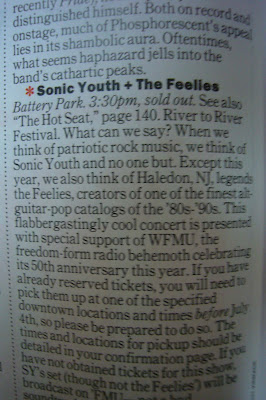 Guess no one told this to the person writing the cover lines.
Posted by Grieve at 7:58 AM 4 comments: