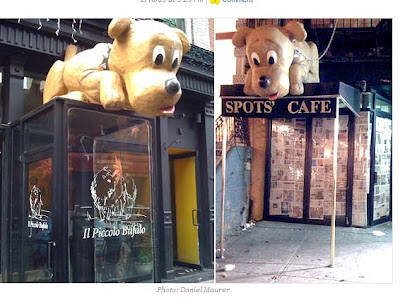 On Mulberry...Daniel Maurer has the scoop. But was there a reward?

He was spotted, so to speak, by two of our commenters/fellow bloggers...and I didn't get around to doing a follow-up...

bryan said...
I don't think it's the same dog, but there's one like it on Mulberry Street over the door to an Italian place. Careful to whoever's calling Mulberry above Canal "Chinatown": those kind of words could still get you hurt!

February 3, 2009 4:42 PM
Jill said...
I am sure it's the same one. My camera battery died on me during Chinese New Years, but Mulberry Street sounds exactly right. How many big brown dogs perched over a canopy can there possibly be in one small town?

Posted by Grieve at 6:15 AM No comments:

As Alex noted Sunday, the pooch who kept watch over the now-shuttered Spots' Cafe and Good Dog on St. Mark's Place is no longer on his perch.... 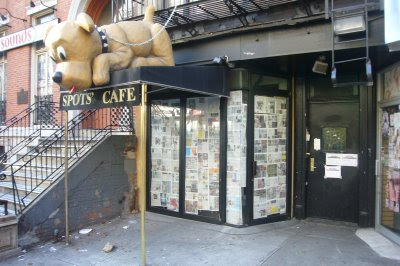 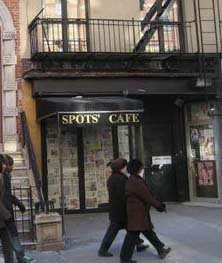 In the comments on Alex's post, Jill said that she saw the pup in Chinatown...but, without photographic evidence, can we be sure that it's the same one? I'm actually curious what happened to the big fellow...I've softened my stance on him/her. Maybe I will miss the thing...At first, the dog seemed to represent the continued Disneyfication/froyogurtization of St. Mark's...serving as a metaphor for what was wrong with the neighborhood: big and stupid...Now, given the state of things, I hope the poor thing finds a good home. He/she just wanted to be loved. 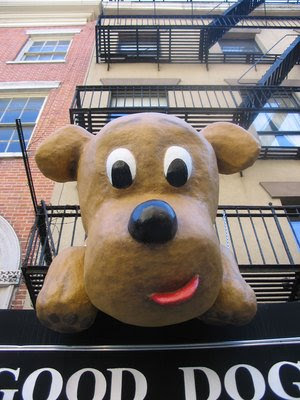 Previously on EV Grieve:
Not such a hot spot

[Missing pooch photo by Alex via Flaming Pablum. Head on dog photo via The Voice]
Posted by Grieve at 6:14 AM 2 comments:

Not such a hot spot 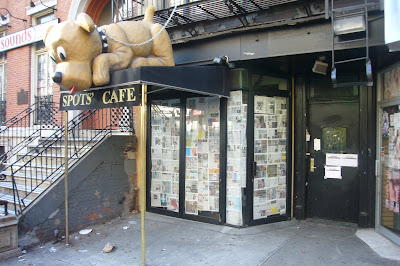 OK, so. Earlier this year, the franks place Good Dog closed on St. Mark's Place between Second Avenue and Third Avenue...and the pooch on the awning stayed for the second incarnation, Spots' Cafe. Which I never set foot in. Maybe no one else did either. It's gone.
Posted by Grieve at 7:00 AM 4 comments: