Behind the landlord ultimatum at Ray's Candy Store 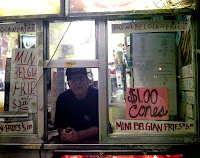 A few hours ago, Chris Flash interviewed Ray Alvarez, the proprietor of Ray's Candy Store at 113 Avenue A, for The Shadow. As you may recall, Barbara Chupa, the managing agent of the building that houses Ray's store, with the help of a bodyguard, reportedly threatened to padlock his store unless he paid the two months of rent ($8,000 in total) that she says he owes.

Here is an excerpt from The Shadow exclusive:

Ray's landlord is the Leshko family, from whom Ray also rents an apartment in which he lives upstairs from his store. Though the Leshkos have had a good relationship with Ray since Ray opened his store in 1974, Ray says it is Chupa who wants him out. Since 2000, Chupa has been managing the Leshko properties on the Lower East Side. These include Ray's store at 113 Avenue A, 131-33 East Seventh Street and 66 St. Mark's Place.

Ray told The SHADOW that at Chupa's insistence, since 2000, Ray has been renting his store with no lease at $4,000 on a month-to-month basis. According to Ray, under Chupa's management, 25 other stores in the neighborhood are operating without the protection of a lease.

On Thursday night, Chupa told Ray that she has a new tenant who will pay $5,000 per month for his store. If so, Chupa could get a $10,000 commission, the equivalent of two months rent, from the new tenant. As Ray is already paying a peak rent for his small store, and as the neighborhood is already full of empty storefronts, it is doubtful whether a new tenant would be able or willing to pay as much or more for Ray's store.

Meanwhile, Bob Arihood at Neither More Nor Less reports that the deadline passed without Ray making the back rent payment. Ray's is still open...

For further reading on EV Grieve:
The comments section on the post "Deadline Friday: Ray's Candy Store in imminent danger of closing"

[Photo by Bob Arihood via The Shadow]
Posted by Grieve at 8:49 AM 7 comments: 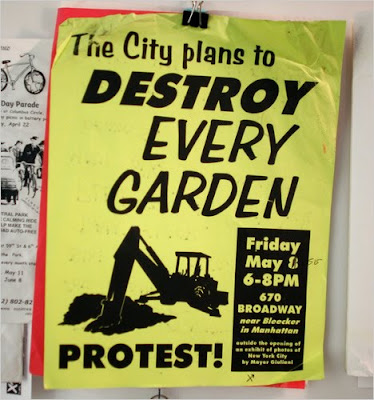 Missed this piece in the Times yesterday about Time's Up! founder Bill DiPaola. His collection of fliers and artwork from nearly two decade's worth of Lower East Side protests is becoming part of an archive at NYU.

[Photo: Kirsten Luce for The New York Times]
Posted by Grieve at 8:15 AM No comments: 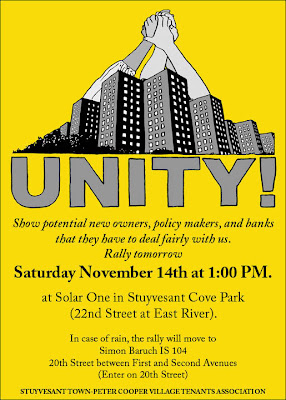 Posted by Grieve at 2:37 PM No comments:

The Times profiles a "community citizen"

The Times profiles Robert Lesko today...here are a few passages from the piece:

When he’s not working, there’s a good chance that Mr. Lesko, 48, will be standing up for some cause. While not alone in perpetual protest, he is certainly among the more ubiquitous activists at Manhattan rallies. Each week, Mr. Lesko scours NYProtest, a listing of street demonstrations distributed by e-mail by a fellow activist, and chooses three or four that match his leftist political leanings.

He is known on the scene as a colorful character who often wears costumes that attract news photographers. Several years ago, to protest the presence of Coca Cola products on the New York University campus, where he is a secretary in the George H. Heyman Jr. Center for Philanthropy and Fundraising, Mr. Lesko wore a Coke-can costume that he had made ...

“You have to figure out what will work,” he said at another rally a week after the vice squad protest. “Today I couldn’t think of anything.”

This was last Saturday, and the event was a march in the East Village to protest the proposed elimination of the M8 bus line. He attended this event in street clothes.

“This is Saint Bobby right here,” said Michael O’Neil, a media manager for Reverend Billy, a comic preacher who organized the march. “He’s a pillar of our community because he shows up. Bobby is the epitome of the community citizen.”