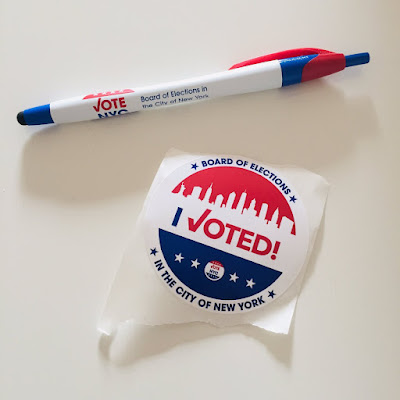 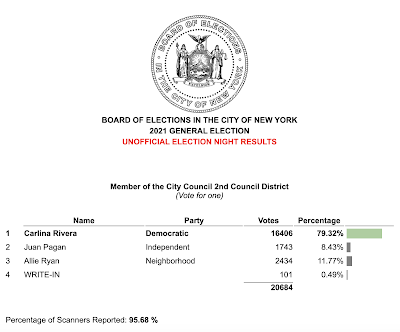 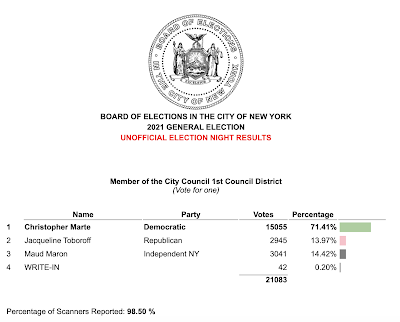 And from Marte's camp...
And as expected in the race for mayor, Eric Adams "cruised to victory" in the general election over Republican Curtis Sliwa. You can find the full NYC results here.
Posted by Grieve at 10:00 AM 26 comments:

Rivera, a former Mendez staff member who grew up on the Lower East Side, received nearly 61 percent of the vote, according to election information published by NY1.

Turns out that while Jeter may have nice things to say about Cho, he wasn't endorsing him. As the Post followed up: "There was a communications mix-up and a draft release was sent out prematurely."

In addition, supporters of Rivera's opponents on Monday were also peddling since-deleted Facebook photos of her husband, CB3 chair Jamie Rogers, sailing on his father's yacht during races in recent years. Other critics questioned why/how they were living in Section 8 housing. The Villager explores that angle here. Rivera and Rogers both said that "it’s perfectly legal for them to live in the apartment and that their incomes were fully vetted under the requirements of the Section 8 program."

Finally, as The Lo-Down reported, developer Gregg Singer, who owns the former P.S 64 and CHARAS/El Bohio community center on East Ninth Street, began campaigning against the District 2 candidates, including Rivera, who might try to force his hand at returning the property for community use.

The Villager has other local election results here. According to the Daily News, there was "terrible voter turnout" yesterday.
Posted by Grieve at 6:56 AM 30 comments: 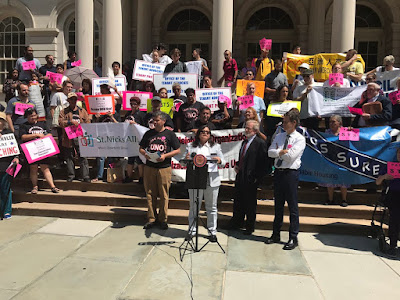 On Wednesday, City Council passed comprehensive legislation as part of the “Stand for Tenant Safety” package that aims to provide greater tenant protection.

Per DNAinfo: "The bills range from increased fines for landlords, requiring a 'Safe Construction Bill of Rights,' stricter preventative measures to address construction as harassment, and the creation of an Office of the Tenant Advocate inside the Department of Buildings."

For far too long some of the city’s worst property owners have used devious, despicable tactics, as well as construction renovations to harass and intimidate tenants. Tenants living in buildings that are undergoing substantial construction usually do not know where to turn.

Therefore, the passage of the “Safe Construction Bill of Rights” legislation would require landlords to provide tenants prior notice of significant construction projects and periodic updates about the status of such construction projects. I believe this is common sense legislation and its passage will demonstrate that New York City will ensure that construction is safe with tenants in place and that tenants will be informed. The overall impact of this legislative package is that New York City will be the best and safest place to live.

Read more about the legislation in the City Council press room here. 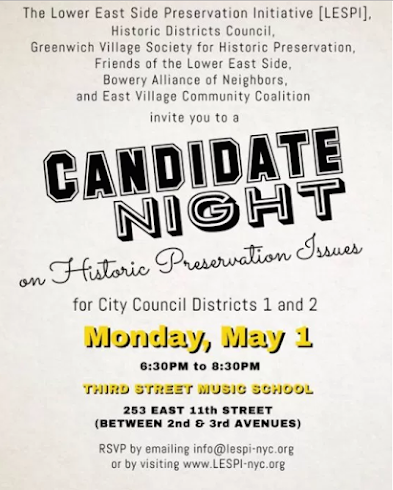 An array of neighborhood groups are hosting a forum on Monday night (May 1!) with candidates for City Council Districts 1 and 2 to share their thoughts on "Historic Preservation Issues."

You’ll have the opportunity to ask questions about their plan to preserve the historic architecture, streetscapes and character of the Lower East Side, from Chinatown to 14th Street.

Find more details and to RSVP here.
Posted by Grieve at 4:15 AM No comments:


In this week's issue, The Villager profiles the two candidates for District 2 City Council, which includes the East Village, part of the Lower East Side and Union Square, among other neighborhoods. 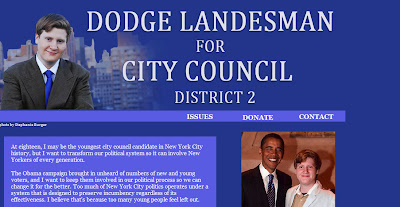 Meet 18-year-old Dodge Landesman. And his campaign his raised $6,500 so far, thanks to contributions from Julianne Moore and Danny Meyer. District 2 includes the East Village and the Lower East Side. (NY1)
Posted by Grieve at 6:34 AM No comments: