Vancouver now has an East Village

VANCOUVER, BRITISH COLUMBIA — (Marketwire - March 1, 2012)
Running along East Hastings Street from Commercial Drive to Renfrew Street and including the Powell Street light industrial area, The East Village is distinguished by its vibrant, multicultural population. Local residents are served by more than 400 businesses, which also draw other city dwellers and suburbanites into the area.

Businesses in The East Village range from the essential to the exotic. There are stores, services and eateries — many independently-owned — that serve the day-to-day needs of local residents and visitors. But you can also find unique items, such as one-of-a-kind delicacies for foodies, exceptional flies for fishing enthusiasts and the factory store of Canada's most famous boot-maker.

Soon to appear on distinctive street banners, The East Village name was devised by the Hastings North Business Improvement Association (HNBIA) with the help of the local community.

"People really liked The East Village name because it's in keeping with our friendly and progressive neighbourhood," says Patricia Barnes, Executive Director of the BIA. "We are also fortunate to have an active, independent business sector that contributes to the village experience."

Email ThisBlogThis!Share to TwitterShare to FacebookShare to Pinterest
Labels: Canada, covering the East Villages of America 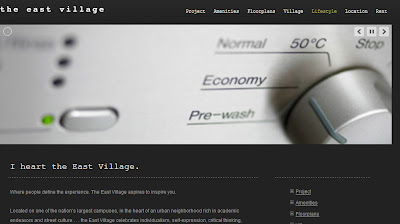 And as we turn our attention today to Columbus, Ohio, let's take a look at a new luxury apartment complex going up near the Ohio State campus. And what might this oasis of student life and luxury be called...?

Welcome to The East Village. It’s not in Manhattan, but it is inspired by the city’s once dilapidated neighborhood transformed by the artists, poets, and writers of the 1960’s. Like the original East Village, our project invites the creatively inclined or aspiring into a modern, urban village in a revitalized neighborhood on OSU’s campus. The East Village is where urban means community, where local meets luxury, and where people define the experience.

What blather. Of course, in reality, the "artists, poets, and writers" are driven out because of escalating rents caused by new luxury housing such as this... (I think you can even draw some parallels to this project to Red Square.)

And, if you happen to be in Columbus on Saturday, you can swing by for the official "ground-breaking" that includes a tailgate party and screening of the Ohio State-Wisconsin football game.

UPDATE:
Thanks to Mike Spence at NYPress for picking up this item... and he has more to say on the topic. "A housing complex near Ohio State University is calling itself the East Village. By the time this blog is posted, NYU plans to own half of it."
Posted by Grieve at 7:00 AM 15 comments:

Email ThisBlogThis!Share to TwitterShare to FacebookShare to Pinterest
Labels: covering the East Villages of America, WTF

News from other East Villages: Shots fired at a party bus in the East Village of San Diego

According to 10 News in San Diego:

A shooter fired three rounds from a shotgun at a party bus early Monday morning in the East Village following an apparent road rage incident in La Mesa, but no one was injured in the attack, a police sergeant said.

The shooting occurred while the party bus was stopped at a gas station in the 1600 block of F Street around 1 a.m., according to San Diego police Sgt. Bob Dare.

Several people were on the bus when a white van pulled up and someone from the van got out and fired three shotgun rounds at the front of the bus, Dare said.

An update on the East Village of Des Moines

Remember that classic 1930s service station in the East Village of Des Moines, Iowa, that was saved?

Sort of good news from the East Village of Des Moines!

An update from the Des Moines Register:

A classic 1930s service station in the East Village has been saved, for now.

Historic East Village Inc. is raising the $60,000 needed to move the building from property purchased by businessman Jim Cownie in August. The group has already raised $40,000, including $10,000 from a Cownie family foundation.

The move will be to a temporary site at one of several possible locations until a permanent owner and location for the one-story building can be found, said Sarah Oltrogge, president of Historic East Village.

In October, the 78-year-old service station was identified by the Des Moines Rehabbers Club as one of the city's seven most- endangered buildings because of Cownie's plan to demolish it to create a site for development.

Previously on EV Grieve:
Something about the East Village of Des Moines seems strangely familar
Posted by Grieve at 10:02 AM 1 comment: