Details are still coming in regarding an apparent suicide on East 11th Street at Second Avenue this evening around 5:30. Witnesses put the incident occurring at 300 E. 11th St. According to the Post, EMS rushed the woman to Bellevue where she died.

A reader said that she was upset to see remnants from the tragic scene left behind on the sidewalk this morning ... 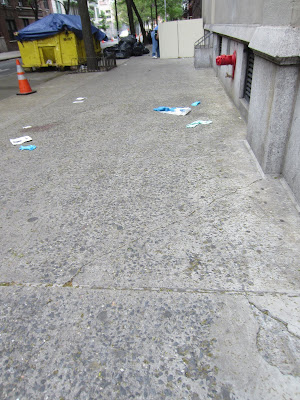 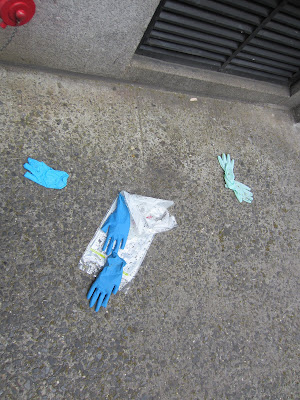 In the comments, someone left the URL to the woman's obituary in The New York Times. You can access that here.
Posted by Grieve at 7:29 PM 25 comments:

Today, the Times looks at data from the National Highway Traffic Safety Administration. From 2006-2008, 445 pedestrians were killed during the three-year period. According to the report: "In Manhattan, which had 120 deaths during the period, the heaviest concentration of deaths, 16, was on the Lower East Side, just south of the Williamsburg Bridge." Third Avenue was the deadliest road in the city, with nine fatalities during that time period.
Posted by Grieve at 8:47 AM 1 comment:

Email ThisBlogThis!Share to TwitterShare to FacebookShare to Pinterest
Labels: deaths, Lower East Side

According to the Times: Gary Kurfirst, who helped shape a generation’s rock music aesthetic as a manager, promoter, publisher, producer and label executive, steering seminal acts like the Talking Heads and Jane’s Addiction, died on Tuesday [Jan. 13] while vacationing in Nassau, the Bahamas. He was 61."

The cause has not been determined. The bands he managed included Blondie, the Ramones and the B-52’s.

As the Times notes:

As a young promoter moving to Manhattan from Queens in 1967, Mr. Kurfirst opened the Village Theater, which metamorphosed into the legendary hippie heaven the Fillmore East, later managed by Bill Graham.

The following year he staged the New York Rock Festival at Singer Bowl in Flushing Meadow Park, an open-air event featuring Janis Joplin and the Doors. Its success helped inspire the concert at Woodstock in 1969.

Here's an in memoriam site created after his death.
Posted by Grieve at 6:14 AM No comments: