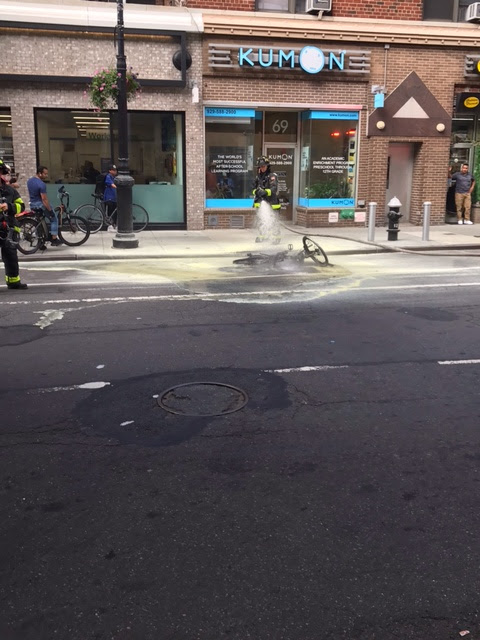 Some e-bike drama today on Eighth Street just west of Broadway... as the FDNY was called in to douse the flames on a bike that caught fire... thanks to EVG reader MP for the shots... 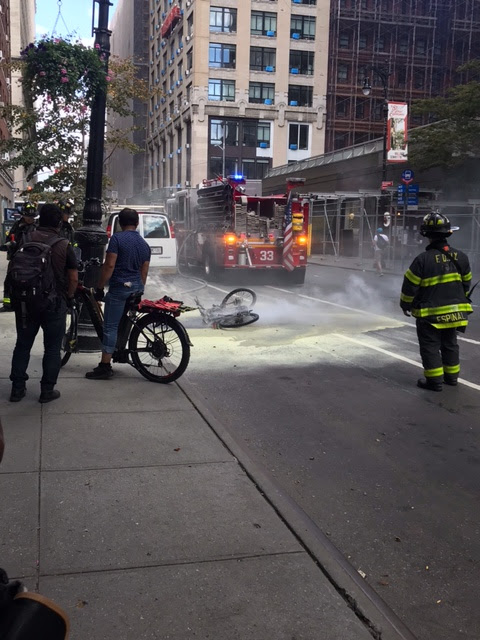 Email ThisBlogThis!Share to TwitterShare to FacebookShare to Pinterest
Labels: e-bikes

Mayor vows to crack down on e-bikes

Mayor de Blasio announced yesterday that the city will crack down on businesses who allow their employees to use e-bikes for deliveries.

Here's part of the official announcement:

“E-bikes are illegal to operate in New York City and the NYPD is stepping up enforcement,” said Mayor de Blasio. “Those at the top of the food chain need to be held accountable. That’s why instead of merely targeting riders, we’re going after businesses that look the other way and leave their workers to shoulder the fine.”

E-bikes are illegal to operate on New York City streets. According to the City Administrative Code, an “e-bike” constitutes a “motorized scooter” and “no person shall operate a motorized scooter in the City of New York.” So far this year, the NYPD has seized 923 e-bikes compared to the 341 it confiscated this time last year, an increase of more than 170 percent. Nearly 1,800 civil and moving summonses have been issued to e-bike operators year-to-date.

Businesses that enable e-bike use and turn a blind eye to employees who operate them are also at fault. City law states that “a business using a bicycle for commercial purposes shall not possess any motorized scooter and shall not permit any person to operate a motorized scooter on behalf of such business.”

Beginning in 2018, the NYPD will issue a new department directive and provide officers with the necessary forms and training to execute civil enforcement against businesses much more efficiently by allowing officers to issue civil summonses to businesses through the mail. While the NYPD will continue confiscating e-bikes and issuing summonses to riders — particularly those riding in a hazardous manner — officers will step up enforcement activity against businesses that too often put their employees in a position to break the law.

Currently, riders caught operating an e-bike are subject to a civil summons, confiscation and fines of up to $500. Beginning next year, businesses that utilize e-bikes or allow employees to operate them will receive a civil summons and a $100 fine for a first offenses and a $200 fine for each subsequent offense.

Jay Cai, the owner of Banhmigos restaurant in Brooklyn, told The Wall Street Journal that e-bikes are valuable "because of the increased and heavy traffic in New York and lack of parking spots." He said on average he gets 25 delivery orders an hour for a profit of $30,000 a month. Without an e-bike, he claimed that would drop by 50 percent.