Report: The Stone said to be closing in 2018; new venue in the works 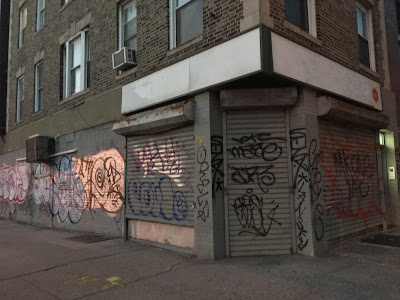 With news that Cake Shop and Elvis Guesthouse are closing after New Year's Eve, it has been a tough time for fans of the area's live music venues.

Now comes word via The New York Times that the current home of The Stone, John Zorn's experimental performance space on Avenue C at Second Street, will close, though not until February 2018.

In an emailed statement, Mr. Zorn confirmed the timing of the closure, but added that there was a likely future for the Stone in another space. “We hope to secure a new location and discussions are proceeding but as yet nothing has been definitely decided,” he wrote.

“We do hope you will all enjoy this last year in our historic underground East Village location and that you will all follow the music wherever it leads... 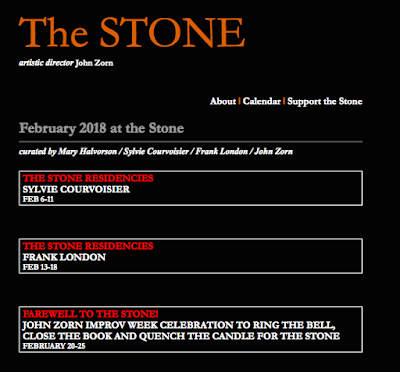 Check out the Stone's schedule here for a look of what's to come in the year ahead. 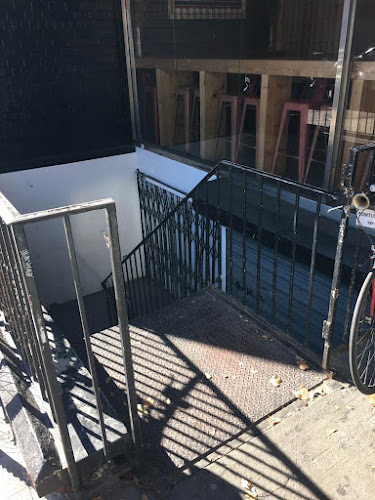 Live music takes another hit as two venues are shutting down after New Year's Eve.

The bar, located in a subterranean space between Fifth Street and Sixth Street, recently confirmed — via Brooklyn Vegan — the rumors of a pending closure.

The venue opened in early 2015 ... and by November 2015 had drawn complaints from neighbors who say the owners didn't do enough to mitigate the noise from the space. At that time they were said to cut back on the number of shows in the space.

Elvis Guesthouse co-owners Zachary Mexico and Billy Jones, who operate Baby's All Right in Williamsburg, are opening a venue on Lafayette near Astor Place described as an "an indie music hall and restaurant."

The 11-year-old cafe/live music venue between Stanton and Rivington has had its share of financial struggles ... which owners Nick and Andy Bodor were able to overcome with a crowdfunding campaign in 2012.

Earlier this year, the owners were looking to sell the ground floor cafe/bar while maintaining the well-curated live-music spot downstairs.

BoweryBoogie has more on what's ahead for the space via an email from the Bodors...

We will close for improvements January 1, and reopen as soon as possible, but the end of Cake Shop in its current incarnation is this coming New Year’s Eve. Tonight is the start of some very, very special goodbye shows, and we’d love to see you all!!

Location and sustainability in our current and long running model have been an issue for more than a long time, as I’m sure you’ve heard me whine about for years. As beloved to you and me as it is, we are failing to keep up with the bills, we have been for years. It’s been the longest, most fulfillable, most enjoyable project of my entire life.

You can find a list of their final shows here.

Cake Shop will rock on
Posted by Grieve at 9:24 AM 6 comments:

Report: Fontana's packing it in on the LES 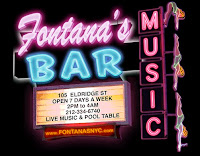 The owners of Fontana's will be closing their bar and performance venue at 105 Eldridge St. this spring, The Lo-Down reports today.

Proprietors Holly Ferrari, Mary Finn and Deannie Wheeler told The Lo-Down that "it has become increasingly hard to be an independent business in New York city without compromising your vision." With a new lease, their monthly rent in the space between Broome and Grand would have exceeded $30,000.

They haven't set a closing date just yet.

Live music returning to the Continental (for at least one night) 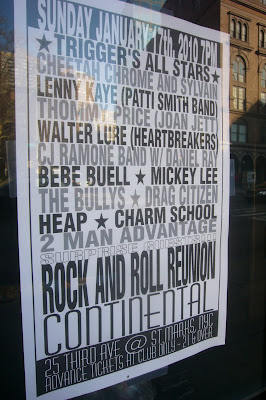 Third Avenue near St. Mark's Place. I actually haven't been here since they renovated the space and did away with live music several years ago. As Trigger, the owner, said at the time: "When he first opened the club 15 years ago, the East Village was still the East Village. Now I’m surrounded by McDonald’s and Starbucks and K-Mart and I’m paying that level rent..."
Posted by Grieve at 6:58 AM 11 comments:

The Mercury Lounge survived John Mayer, it can survive this 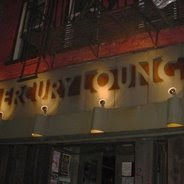 From Curbed: The building that houses the Mercury Lounge is now on the market...However, the Mercury's lease runs until 2018...
Posted by Grieve at 10:54 AM 2 comments: