Does a quiet block even exist in the East Village? 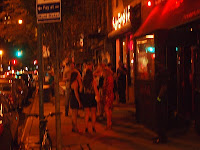 A reader is looking to move apartments later this year, and is starting to do some research for an ideal block. Despite being in a so-called Resolution Zone, the Community Board continues to OK liquor licenses, and the block the resident lives on has "disintegrated into a chaotic nightly mess."

The reader loves the East Village (in general!) ... but was thinking — is there such a thing as a quiet residential block here?

The reader grew up here and is "well aware silence does not exist in this city, but there has to be a strip that's known to be more civil and residential and less likely to draw those bar crawlers who come from I don't know where."

"While the neighborhood has certainly changed, I want to still believe there is hope."

I made a few suggestions, including:

I made more suggestions... but that's enough for now.

There are many fine blocks, though I may not want to live on them. What do you think — is there a quiet block? (And would you tell us if there is?) What about the above picks?

[File photo outside Superdive back in the day]
Posted by Grieve at 7:00 AM 45 comments:

Email ThisBlogThis!Share to TwitterShare to FacebookShare to Pinterest
Labels: living in the East Village

East Village bathroom for rent (presented without any potty humor) 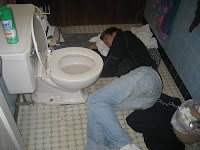 I am a female in my mid 60's and I am looking for a room mate. Times are tight and I need some extra money.
I am willing to rent out my bathroom in my 1 bedroom east village home.

My bathroom is large. You can easily put a twin air mattress in there. I only ask that when I need to use the bathroom, you or your air mattress are not in it.

I do ask that when you are in the apartment, you confine yourself to the bathroom. I do not feel comfortable with a stranger walking around my living room. This might change as I get to know you better.
You may have guest over as long as they are cnfined to the bathroom as well. This might seem a bit odd but please remember the rent is $400 and the bathroom is large.

Email ThisBlogThis!Share to TwitterShare to FacebookShare to Pinterest
Labels: Craigslist, living in the East Village, rentals 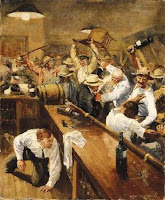 "Hey, honey, can you guys make a Benton's Old Fashioned?" asks the bedheaded hipster who looks too skinny to support life.

It's a relatively slow moment for a Friday night, so I take a second to appraise him and his friend. Of the nine thoughts that cross my mind in that moment, including the obnoxious juxtaposition of "honey" with "guys," I settle on replying, "I make a great Old Fashioned, but I have to admit I don't know what a Benton's is, and I don't get stumped very often."

"So you're in need of a good stumping?" That's from Bedhead's buddy, a bespectacled dude with a big shrub of curly hair like he's auditioning for the lead in "Knocked Up 2: Electric Boogalo."

I raise my eyebrows. "And you're just the guys to give it to me?"

Bedhead says, "We had it on the Lower East Side a few weeks ago at this place called PDT, but we couldn't get in tonight."

"I thought it was Alphabet City?"

"Yeah, Alphabet City is part of the East Village. The Lower East Side is below Houston."

"I thought that was NoLiTa and SoHo."

I smack my hand on the bar a few times.

By the way, a Benton's Old Fashioned is made with bacon.
Posted by Grieve at 12:03 AM 2 comments:

East Village home of the week

The real-estate section in the Post today includes this Seventh Street fixer-upper in its "houses of the week" section: 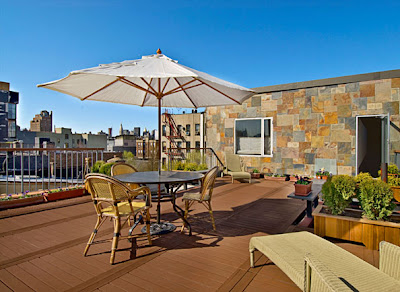 Some details!
Bedrooms: 3 Bathrooms: 2 Square feet: 1,450 Maintenance: $730 -- This penthouse co-op in a prewar townhouse really is an oasis, inside and out. Set on a tree-lined stretch of East Seventh Street, the "architect-designed" full-floor duplex features a cozy living room with a wood-burning fireplace. There are built-in speakers and stereo wiring, a washer/dryer, plus two "spectacular" terraces that total 900 square feet. Bonus: The upper terrace has a reflecting pool and fountains.

PS
Dumb question. But. What in the world does anyone need a reflective pool on the "upper terrace" for...?
Posted by Grieve at 1:50 PM 3 comments:

Email ThisBlogThis!Share to TwitterShare to FacebookShare to Pinterest
Labels: houses of the week, living in the East Village, Seventh Street

Deal of the week 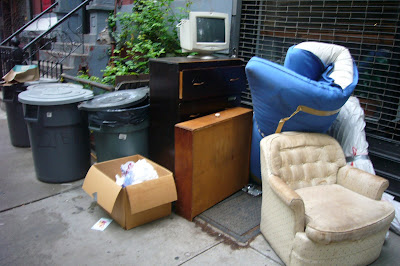 As the sun goes down, this neighborhood comes alive! Mere steps to the vibrant East Village / LES scene, shops and boutiques! A stones throw to happening Ludlow and Clinton Steets! F V J M Z a short stroll away! Off the Avenues for easy cab access 24hours a day! Coffee shops, clubs, lounges, restaurants and all neighborhood amenities!