The Meatball Factory looks rather closed 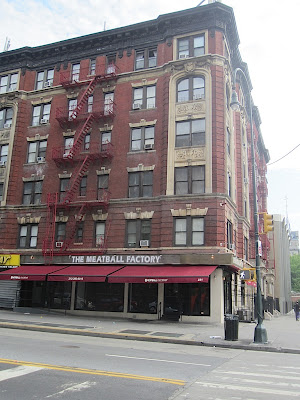 EVG reader Tony noted the following this past weekend:

True. The space looked rather deserted when we stopped by. They were not open during their announced hours yesterday. The inside was in some disarray... there were dirty glasses ... empty shelves... scattered tables and chairs... 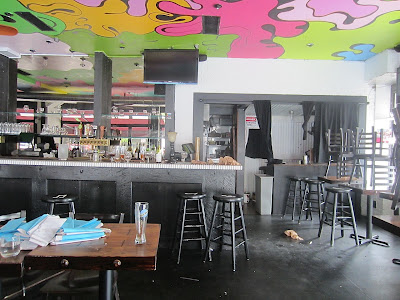 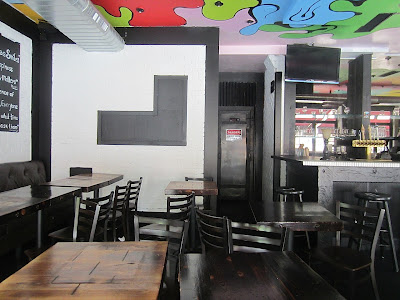 Perhaps, like several other restaurants (Prune, The Immigrant), The Factory took off last week for vacation. But there's no note... No message on Facebook... No outgoing phone message...

The Meatballers opened here on 14th Street and Second Avenue to some fanfare last October (our dearly departed reviewer liked it!) ... the place had a celebrity chef of sorts, "Top Chef" alum Dave Martin, who left in the spring,

The Factory apparently closed in early May ... quickly becoming a pop-up restaurant by The Hole people called Hole Foods.

It reopened in late May with an expanded menu that featured a little bit of everything. Sake! Sangria! Fajitas! A raw bar!

As you may recall from last July ... a Meatball Factory rep told an EV Grieve reader that the meatballs here "will put the Meatball Shop to shame."

Previously on EV Grieve:
[Updated] Renovations for the Meatball Factory
Posted by Grieve at 6:48 AM 4 comments:

Meatball Factory back to meatballs, plus sangria, sake and a raw bar

OK, so The Meatball Factory apparently closed a few weeks ago on East 14th Street and Second Avenue ... quickly becoming a pop-up restaurant by The Hole people called Hole Foods.

On Friday, pcvstBee pointed out that... 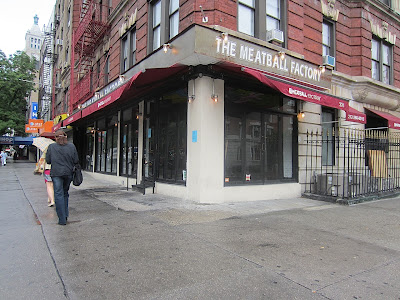 The Meatball Factory was back! But! It's under new management... and they have expanded the menu to include fajitas, quesadillas and a raw bar ... not to mention more drink options... 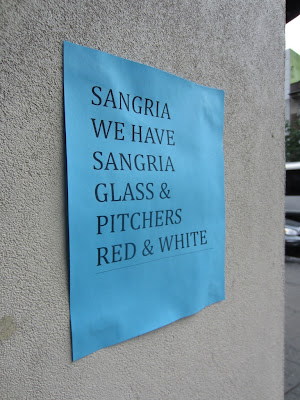 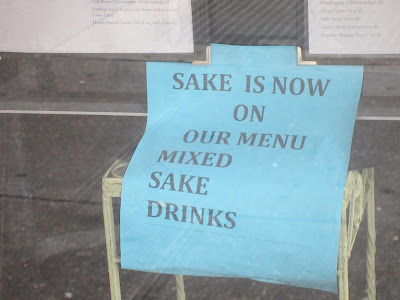 Maybe they can add pancakes to the menu as well to compete with IHOP.

Previously on EV Grieve:
[Updated] Renovations for the Meatball Factory
Posted by Grieve at 6:20 AM 2 comments:

Earlier in the month, a resident who lives above the new Meatball Factory on Second Avenue and 14th Street noted that the restaurant had switched addresses.

Anyway! Problem solved... the Meatball Factory put up a mail slot in the lobby of 231 Second Ave. 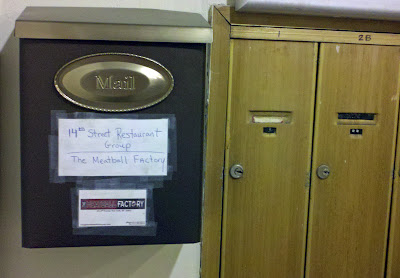 And thank you if you made it this far.

Oh, and The Meatball Factory opens today.
Posted by Grieve at 6:29 AM No comments:

Meatball Factory opening next Tuesday; featuring the 'turducken' and more 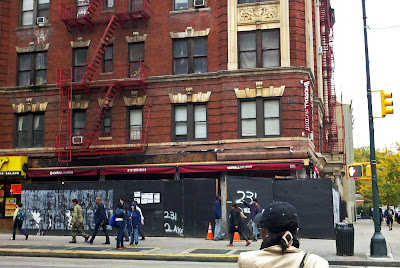 Surprisingly not a super-popular gym located just off the LIE, the Meatball Factory's a 1600sqft ball-eteria coming at you from OG Top Chef alum Dave Martin. The set up's like a rustic, industrial (rustdustrial?) bistro thanks to red brick walls, wine barrels aplenty, dark wood tables flanking the central bar, and a to-go counter, because you're going to need a snack on your way to working off all those meatballs at a gym just off the LIE.

If you still have an appetite, then here's a look at their menu via the Meatball website: 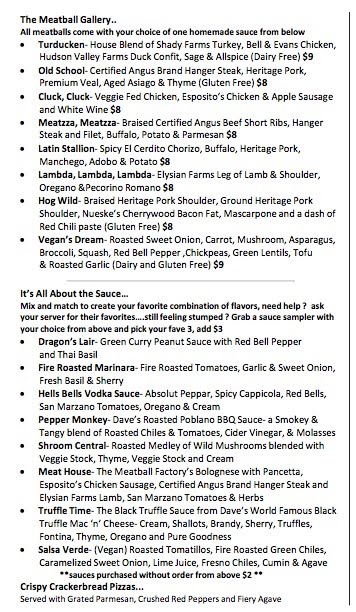 According to Thrillist, Meatball Factory opens next Tuesday. Eater has more information here.

Previously.
Posted by Grieve at 6:40 AM 6 comments:

Late shift at the Meatball Factory

On Wednesday, we had a photo one of the awnings going up at the classy-sounding Meatball Factory on 14th Street and Second Avenue.

A reader, who happens to live in the same building, passed along another photo... 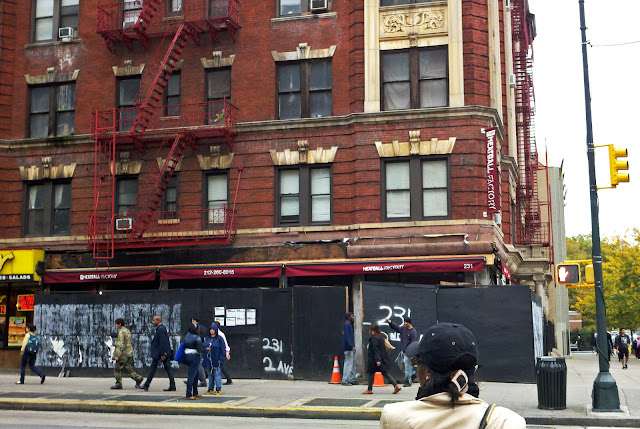 The reader notes that the Meatball crew has been working late. "Construction lasted until 2 AM [Wednesday] night/this morning! Not cool ... the construction noise has been getting later and later over the past few weeks."

As an aside, the resident notes that workers renovating the space painted 231 Second Ave. on the plywood. However, the address of the previous tenant — the Arthur Treachers-Nathan's-Pizza Hut combo! — was 251. E. 14th St. Which means various tenants of 231 Second Ave. have been getting mail for the Meatball Factory. No word yet on any secret meatball recipes.

Previously.
Posted by Grieve at 6:51 AM 2 comments:

Can the meatballs be far behind? 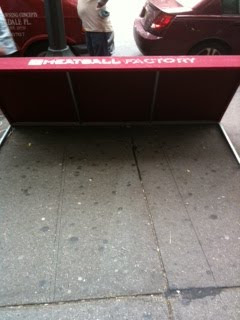 Here on IHOP Way 14th Street at Second Avenue, the Meatball Factory awning has arrived. Workers will be attaching it to the corner space that once housed the Pizza Hut-Nathan's-Arthur Treacher's combo. (Read more about the plans here.)

As you may recall from July ... a Meatball Factory rep told an EV Grieve reader that the meatballs here "will put the Meatball Shop to shame."

Thanks to Jennifer at Xoom for the photo.
Posted by Grieve at 12:01 PM 8 comments:

Two restaurants have quickly come and gone here at 424 E. Ninth St. between Avenue A and First Avenue ... (Olivia and Sintir.)

Now, a new tenant is taking over the space... 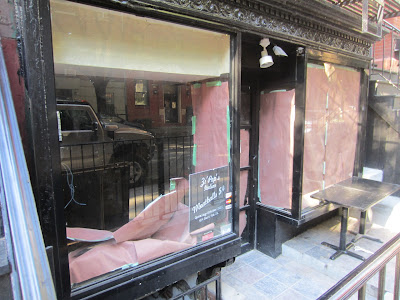 ...and they provided a sneak preview Saturday during the block party. Zi Pep's Italian Sorry — we had the wrong name. It's Zi' Pep's Italian. 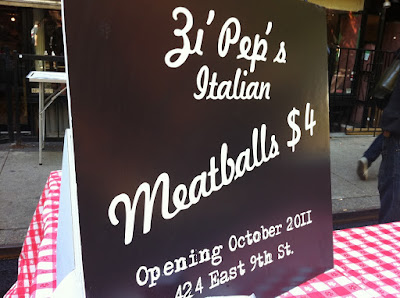 Speaking of meatballs... a quick look at the Destino-backed Meatball Factory coming to the former Pizza Hut-Nathan's-Arthur Treacher's combo on the northwest corner of 14th Street and Second Avenue ... 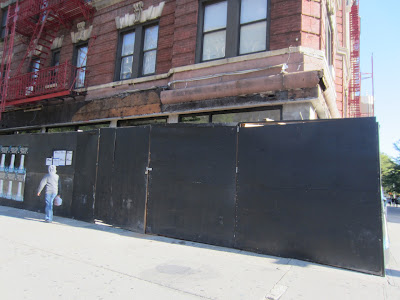