The Villager has the feature obituary on William “Barnacle Bill” Scott. He died May 2. He was 44. Lorcan Otway writes the feature:

Born on July 8, 1965, “Barnacle” was well known in the East Village as a gentleman and a gentle man, in spite of his hardscrabble looks. Bill wore a nose ring, and had a large, upturned scar on the left side of his mouth, giving him the look of a pirate, but that was the farthest from the reality of this man.

He went from the Navy, where he was a petty officer, a bosun commanding small craft, to the Navy Reserve, and then honorably discharged became a merchant mariner, spending a good part of most years sailing American-flag vessels.

When not at sea, Bill spent a good deal of time in Tompkins Square Park, where he was as at home with the “crusties” as he was with the Village intelligentsia. His stories, whether of life at sea or East Village adventures, were punctuated with his trademark Homeric line, “It was not for nothing that...,” and on the story would wind.

[Villager photo by Lorcan Otway]
Posted by Grieve at 6:15 AM No comments:

Lionel Ziprin, 84: "A brilliant, baffling, beguiling voice of the Lower East Side and the East Village"

The Times has the obituary today for Lionel Ziprin, who died this past Sunday. He was 84.

Mr. Ziprin, a brilliant, baffling, beguiling voice of the Lower East Side and the East Village in all its phases — Jewish, hipster and hippie — died last Sunday in Manhattan. He was 84. The cause was chronic obstructive pulmonary disease, his daughter Zia Ziprin said.

He ran his apartment, on Seventh Street in the East Village, as a bohemian salon, attracting a loose collective that included the ethnomusicologist Harry Smith, the photographer Robert Frank and the jazz musician Thelonious Monk, who would drop by for meals between sets at the Five Spot. Bob Dylan paid the occasional visit.

And now: Songs for Schizoid Siblings by Lionel Ziprin and Leyna d'Ancona...

Posted by Grieve at 8:22 AM No comments: 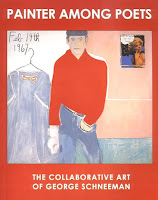 Painting, playing poker till dawn and boiling up pots of midnight pasta for friends in his apartment in an East Village tenement, Mr. Schneeman was sometimes described as New York’s last bohemian. That was not quite right. Seventy-four at his death, he was certainly younger than some of the artists who still animate what were once the city’s unfashionable neighborhoods

Schneeman died this past Tuesday.

In a post on his blog, Michael Lally remembered Schneeman:

George created a life that was perfect for an artist. In the old days his day job was teaching English to immigrants. But he had a rent-control apartment on St. Marks Place, right in the heart of the action that made the 1960s the 1960s — and ditto for the following decades. Even now, the street reflects the times in ways no other part of the city does.

Posted by Grieve at 8:42 AM No comments: