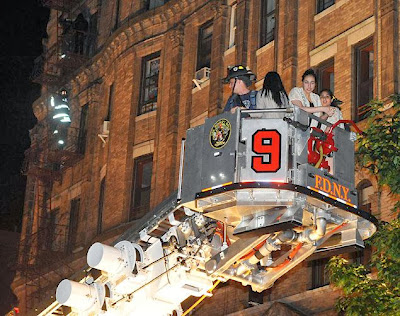 [Photo by Marc A Hermann for the Daily News]

From the Daily News today:

A rooftop rager dissolved into a rescue mission in the East Village early Sunday morning, when a stairway platform crumbled, leaving one man seriously injured after he plunged two stories and trapping more than 30 collegiate partygoers on the roof, authorities said.

Over 30 college-aged revelers had gathered on the roof of 159 2nd Avenue at E. 9 St. in the lower East Side on Saturday night for a moonlit soiree, witnesses said.

Also, the building is at East 10th Street, not 9th Street per the Daily News.

The injured student is in critical but stable condition at Bellevue.

And the reaction from the assembled revelers?

"We were having a party, just a bunch of people hanging out ... Some guy runs upstairs and says, 'Everyone quiet down, everyone shut the f--k up , someone might have died,'" said Martin Barshai, 20, a film student at New York University.

According to WABC 7: "Officials say the building has a lot of college aged students in the building that do a lot of 'partying.'"

The Post has a lot of photos here. Their headline: "NYU rager goes horribly wrong after roof collapse"

The Post reports today that an NYU student jumped on the landing, causing it to collapse, according to unnamed sources.