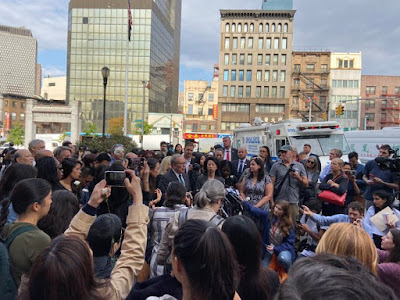 [Comptroller Scott M. Stringer at a vigil for the victims this morning]

The shocking murders of four homeless men early Saturday morning in Chinatown have brought more media attention to the dangers of living on the street.

In a story published in today's paper, the Times provides historical context for the area around the Bowery in which the men were killed.

[T]he Bowery, an area of Lower Manhattan known in the 1930s as New York’s skid row, has long served as a daunting example of the city’s difficulties in addressing street homelessness. If anything, the problem is getting worse: The area is now drawing younger homeless people, many with drug and mental health problems, a population that the city’s traditional outreach methods have struggled to confront.

Despite the luxurification of the Bowery and surrounding area in recent years, the area — specifically Community District 3 — still has one of the highest concentrations of homeless shelters (some two dozen) in Manhattan.

The article discusses the ongoing concerns "about a new subpopulation within the homeless community."

A recent report described them as “travelers” or “young homeless people who travel to destinations depending on the weather, and often include instances of drug use and aggression.”

Over the past three years, complaints have increased about these younger arrivals, and the police and homeless outreach workers have said that “traditional outreach is not successful with this population,” according to the report.

The article includes comments from local community leaders on the need for better mental health services and additional supportive housing and safe-haven beds. Find the article at this link.

In court yesterday, the suspect, 24-year-old Rodriguez “Randy” Santos, was charged with four counts of murder and one count of attempted murder.

Meanwhile, city officials say they will dispatch mental health outreach teams and increase the number of homeless outreach teams who have access to psychiatrists and substance abuse resources, per ABC 7.

The Times says that the homelessness crisis "has been the most intractable problem of Mayor Bill de Blasio’s tenure."
Posted by Grieve at 12:00 PM 14 comments:

Another makeshift shelter arrives along the Liz Christy Garden

As we reported on March 7, city officials dismantled and discarded the makeshift shelter that a homeless man had been living in the past three months on the Bowery at East Houston... 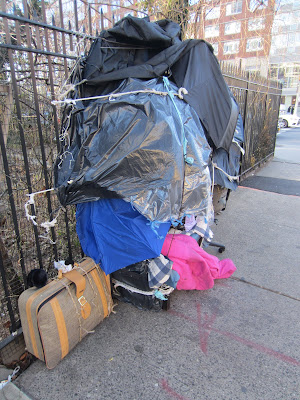 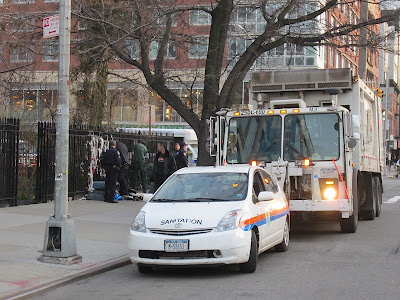 One thing probably doesn't have to do with the other... but the timing made a few readers curious... DBGB set up its sidewalk cafe four days after workers removed the shelter, which sat about 30 feet from the southern edge of the cafe... 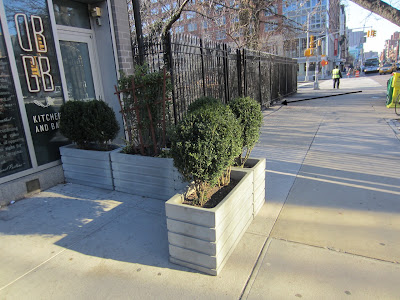 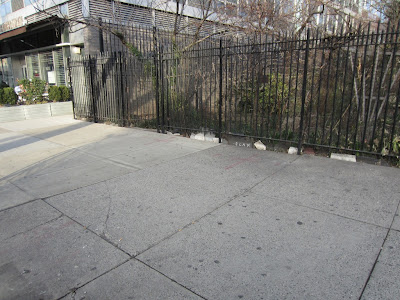 In any event, we noticed that the man, who a Liz Christy volunteer said is from Cuba, has set up a much smaller space not too far away from where he was... so far, nothing more than a chair and a few bags... 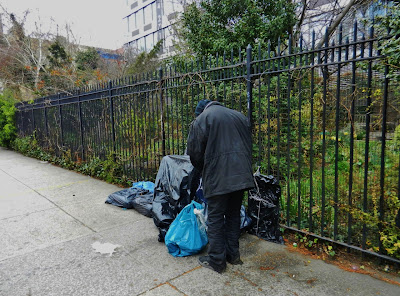 Email ThisBlogThis!Share to TwitterShare to FacebookShare to Pinterest
Labels: DBGB, the Bowery, the homeless

We noticed the hovel here against the Liz Christy Garden fence on the Bowery at East Houston back in the middle of December... 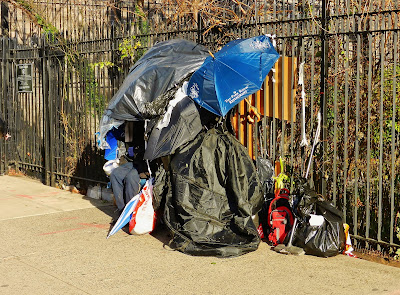 In fact, yesterday, we saw that the man now had a lime couch under part of his home... a Liz Christy volunteer said that the homeless man in his mid to late 50s was originally from Cuba...

We were always surprised that the shelter had lasted this long ...

However, this evening, just after 5, various city employees, including from the NYPD and the Department of Sanitation, dismantled and discarded the shelter and, seemingly, all his possessions... 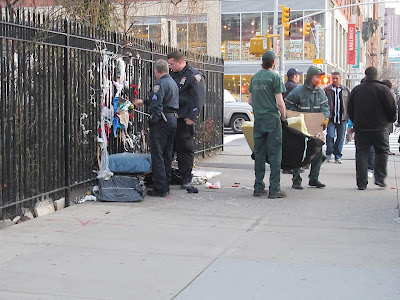 We didn't see the man around... the police were keeping a close, watchful eye on the proceedings... 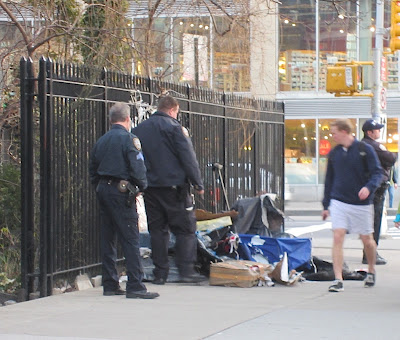 They weren't in the mood for questions, such as what happened to the man.
Posted by Grieve at 6:51 PM 21 comments:

Email ThisBlogThis!Share to TwitterShare to FacebookShare to Pinterest
Labels: East Houston Street, the Bowery, the homeless

Are people in the East Village laughing at the homeless? 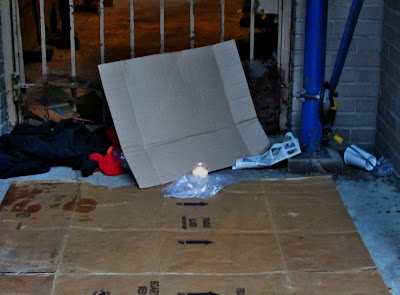 [Tribute for Liz on Avenue B via Bobby Williams]

On Saturday morning, we reported that a passerby found a woman's body outside St. Brigid's on Avenue B ... the police ID'd her as a woman in her 50s named Liz ...

The Post had this item in the NYPD Daily Blotter yesterday:

A homeless East Village woman was discovered dead yesterday morning, and police are investigating whether she died from a drug overdose.

The woman, believed to be 50, died on Avenue B near Tompkins Square Park and was found at about 8:50 a.m. by a passerby. There was no sign of trauma.

"She asked me why people ‘are laughing at me,'" said Chanel Clark, 35, who said she spoke to the distraught woman Thursday.

"She said, 'It's so rude the way people laugh at the homeless. It's so cruel.'"